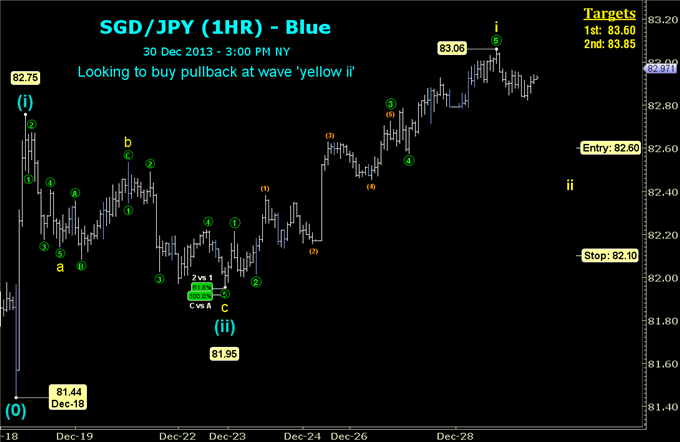 The Japanese yen (JPY) has been weak against most key currencies for many months now, and with this trend still active, we’re keen to buy select counterparts against JPY. To select which pair, however, we’re looking for two things:

Using those guidelines, our top choice right now is actually to buy the Singapore Dollar (SGD) versus the Yen, or in other words, go long the SGDJPY pair.

Typical of second waves, the pullback ended at an almost perfect 61.8% Fibonacci retracement of the impulsive rise. Price then rose impulsively in yellow wavei, reaching 83.06 (being one smaller degree). From here, if 83.06 holds, we’ll then see price pull back in yellow wave ii, and we’d expect at least a 50% retracement.

Therefore, we’d look to buy SGDJPY just above this 50% retracement level, at 82.60. We’re placing a stop just below the 78.6% retracement at 82.10, producing a 50-pip stop. Those who are more conservative may prefer to place their stop at 81.94, which is where the Elliott Wave count is “wrong.”

To make this trade worthwhile from a risk/reward perspective, we’d need to achieve a target at least 50% larger than the size of our stop (i.e. at least 75 pips). Based on the first two blue waves, we could reasonably expect blue wave iii to end above 84.00, being that it is the 161.8% extension of these two blue waves. As the rise has been strong over the past few months, it’s unlikely that this is a corrective move.

Most key JPY pairs made significant lows in early October. The below percentage-change chart shows the increase in the key JPY pairs since that time, and this chart goes a long ways toward validating this long SGDJPY trade idea.

Guest Commentary: Yen Weakness Prevails Across the Board

For example, we may have a favorable Elliott Wave count inAUDJPY, but this chart would warn against buying that pair because it has had the least percentage increase of the key JPY pairs since early October (just 2% relative to the other key currencies).

Meanwhile, SGDJPY appears in the middle of this list with a healthy rise of about 7% (compared to the strongest JPY pair, GBPJPY, which returned 12% during this time).