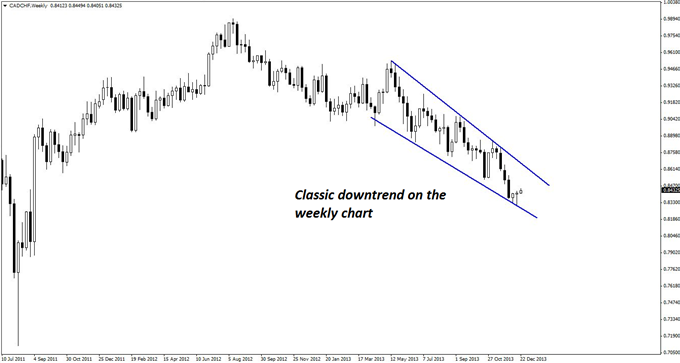 A Classic Short Set-up in CAD/CHF

With Christmas right around the corner, the markets continue to tick along, presenting potential trading opportunities in the process. Today, the most interesting one is playing out in CADCHF, which shows a textbook downtrend on the weekly chart below.

Bearing in mind the mantra of selling rallies in a downtrend, an examination of the CADCHF daily chart shows the desired pullback. 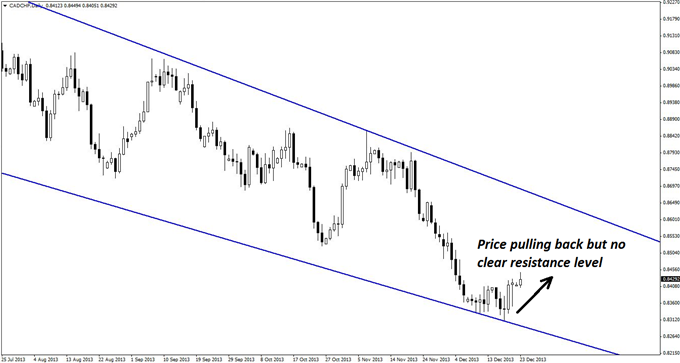 The somewhat worrisome aspect about this chart is the fact that there is no clear level of resistance on which to sell. Nonetheless, this is a very valid trade given how clearly the bears were controlling the previous move down. It now stands to reason that there should be another move to the downside.

Thus, drilling down on the smaller time frames helps to better define this trade, and the four-hour chart below shows some interesting price formations. 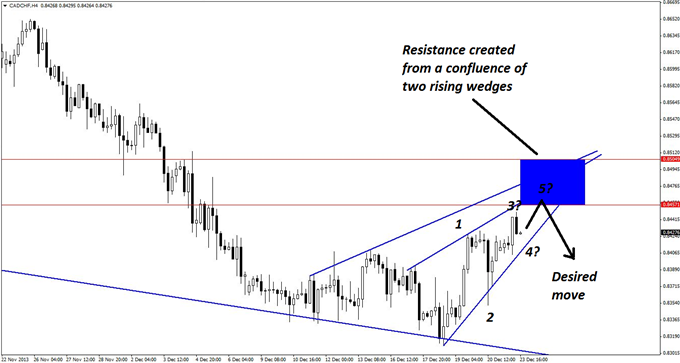 There are two rising wedges on the four-hour chart of CADCHF, the confluence of which provide the key resistance zone, estimated as 0.8457-0.8504.

The smaller, secondary wedge is particularly interesting, for it is developing into what might be a five-wave Elliott pattern. Those who are acquainted with the textbook Elliott Wave patterns might think this is in violation of the rule which states that the low of wave 4 cannot overlap wave 2. However, that rule applies strictly only to trending waves, and in the case of a wedge, wave 4 can indeed enter the territory of wave 2.

For those who are not interested in debating wave counts and projecting theories, however, the essential move which will trigger this trade is the one indicated on the chart as the rise from the end of the anticipated wave 4 into wave 5, taking price into the resistance zone.

From there, the trigger will occur on the hourly chart (not shown) by way of a pin bar, bearish engulfing pattern, or bearish reversal divergence.

Especially during the low-liquidity Christmas season, be prepared to take two or three tries at this trade. Risk should be kept moderate, as the trading environment is still proving reluctant to offer smooth entries. As a result, traders’ focus should be on making the trades that do trigger really count, as did our recent GBPJPY trade.

See related: Good Chance to Buy GBPJPY on a Pullback