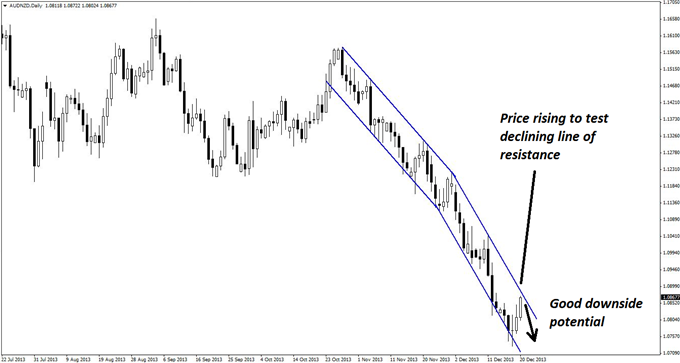 A High-Probability Set-up in AUD/NZD...Again

After the short scalp set-up we discussed in AUDNZD on Wednesday (December 18) shot down more than 80 pips and missed the projected entry area by just three pips, the pair is again offering a potential trade opportunity.

Even a drop to test the current low would provide a potential move in excess of 100 pips. And, given how reluctant the cross pairs have been to give entries on the higher time frames these past two weeks, this is a welcome sight.

This set-up is especially interesting because of clear and tight channel, which should attract many shorts to at least move price down temporarily. Even if this is a small move relative to the daily chart (see below), there is plenty of profit potential to be had on the lower time frames.

As with many classic trend trades, the set-up is straightforward: price is pulling back higher to test a resistance zone that comprises the declining resistance line and previous horizontal resistance levels. This resistance zone has been gauged to be 1.0872-1.0925. 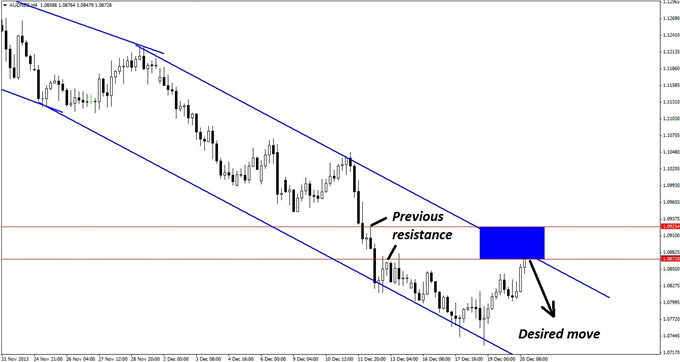 As price is already currently in the marked area, a reversal on the hourly chart (see below) would be a reasonable entry point.

The hourly chart also provides some interesting details about this trade, with a beautiful rising wedge formation in play. The top of the wedge acts as further resistance, although it is worth noting that some wedge overshoot just before a change of trend is quite normal. Nonetheless, the steadiness of price as it cycles up and down within this chart pattern is encouraging. 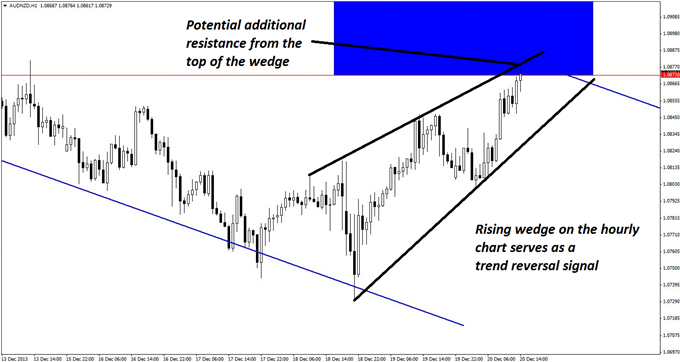 The trigger for this trade would be one of the usual suspects, either bearish reversal divergence, pin bars, or bearish engulfing bars. As a pure technical set-up, this is a high-probability trade and one that merits the maximum controlled risk (usually 2% of capital, although risk tolerance varies widely between traders).

However, for traders concerned about lower liquidity during the holiday season, a slightly lower risk level would be perfectly acceptable. The important thing, as always, is to be prepared to take at least two or three tries at the entry in an attempt to capture this move.

Multiple positions are certainly in order, as this may develop into a swing trade on the daily chart. Thus, part of the position can be taken off to book some profits and the remainder left to run. If things go well, there may even be opportunities to scale in along the way.