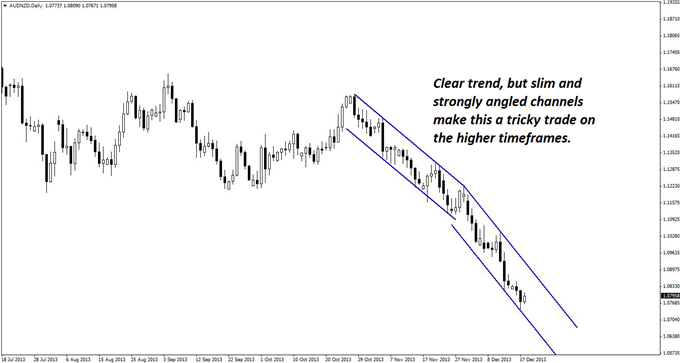 The timely trade set-up we spotted yesterday in GBPJPY is doing extremely well, having touched the projected support zone and then shooting higher on the very first try.

Somewhat ironically, this confirms that the current trading environment is not especially easy to trade, and recent trade results will show that the probability has dropped over the last few trades. (Review recent trading track record on the Straight Talk Trading Blog.)

In this type of environment, an overly defensive trader's account may suffer death by a thousand cuts as trades produce several small losses in a row. On the other hand, overly aggressive traders can really blow up in times like these.

This is a rite of passage for newer traders, and many never make it past this stage. The trick is to accept small losses when they occur, but be willing to hold off on taking profits when they arrive. Instead, trail a stop loss behind price, thus effectively balancing reward and risk. When properly using this method, one good trade can easily recoup all the losses and more.

Many traders go wrong by adjusting their strategies to take profit more quickly, and while this usually does improve probability (at least by a little), it inevitably leads to inadequate reward. Traders who choose to go this route could spend a lot of time trying to recover recent losses even when trades do move in their favor.

To this point, entry on the break of the four-hour pin bar on yesterday’s GBPJPY trade would have yielded a stop loss of 33 pips. At the time of writing, price had gone 190 pips in the direction of the trade with no real threat of turning back. (Moreover, pattern traders will note a series of very friendly bull flags). This more than covers losses from the two prior trades that did not work out as intended.

Now, today's trade in AUDNZD continues to reflect the heighted uncertainty in the market, creating opportunities only on the lower time frames.

The daily chart below shows a clear trend, but the thin channels and their increasing angle makes this a tricky time frame to trade.

Meanwhile, the four-hour chart below presents a clearer trend in the form of an expanding wedge. When price rises to test that resistance, there should be a reaction, which will hopefully translate into a continued move down. At the very least, there should be enough for some profit-taking. 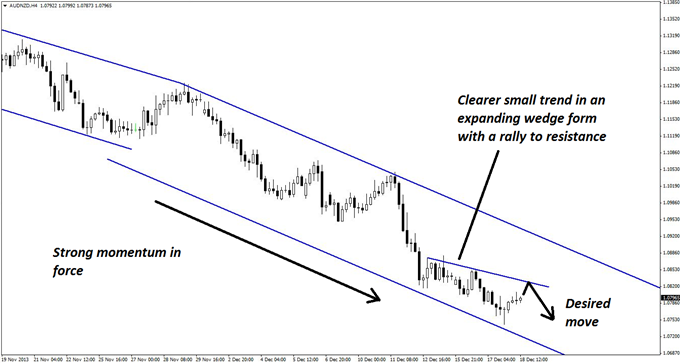 The hourly chart, however, provides the best clues about the key resistance zone from which traders can initiate new short positions in AUDNZD. 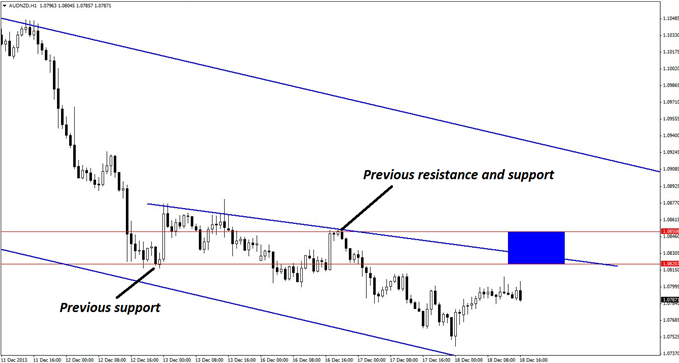 Due to the choppy nature of the current market, the estimate runs conservatively higher than the actual line of resistance in order to account for overshoot. This key resistance zone coincides with previous levels of support and resistance and is estimated as 1.0820-1.0850.

The 15-minute chart (not shown) will provide the trigger for this AUDNZD short trade, and the usual pin bars, bearish engulfing patterns, or bearish reversal divergence would all qualify as valid entry signals. As always, it’s good to be prepared to take two or three cracks at gaining an entry.