A Solid Set-up in a Mostly Overlooked Pair

Heading into today’s key Federal Open Market Committee (FOMC) decision, we were prepared with USDJPY short orders, as described in this previous article. Interestingly enough, on a spike higher this morning, we missed our initial fill by just a fraction of a pip, but we will nonetheless leave the orders in place.

We’re also eyeing another trade idea for today, though. Whenever asked about the key currencies from the Asia-Pacific region, many would think of the Japanese yen (JPY), and probably the Australian dollar (AUD) and New Zealand dollar (NZD). However—and perhaps unfortunately so—the Singapore dollar (SGD) would most likely be overlooked.

Regardless, Singapore has one region’s strongest and most open economies, and it’s a very business-friendly and competitive country with an ultra-low unemployment rate (less than 2%).

The below 30-minute chart of USDSGD shows an impulsive Elliott Wave count from the December 11 swing low of 1.2471. While the count is impulsive, we won’t ignore the possibility of the move higher being corrective.

So even in this section of the chart, we’ve seen a number of impulsive waves higher and multiple three-wave corrective moves lower. This is one reason we’re looking to buy USDSGD after the correction to yellow wave ii.

If we consider the move higher from 1.2471, then a typical third wave would end near 1.2725. If we consider this same move as being corrective, it would typically end near 1.2658. Both of these targets allow us to set up a long trade with reasonable risk reward and multiple targets using yellow wave ii as support.

However, proposing a trade solely based on one chart and calculating one Elliott Wave count is risky, but this risk can be mitigated by assessing current correlations.

The correlation chart below shows large negative percentages on the right-hand axis. This means that USDSGD and AUDUSD are “negatively correlated,” so when one pair moves higher, the other pair typically moves lower, and vice versa. 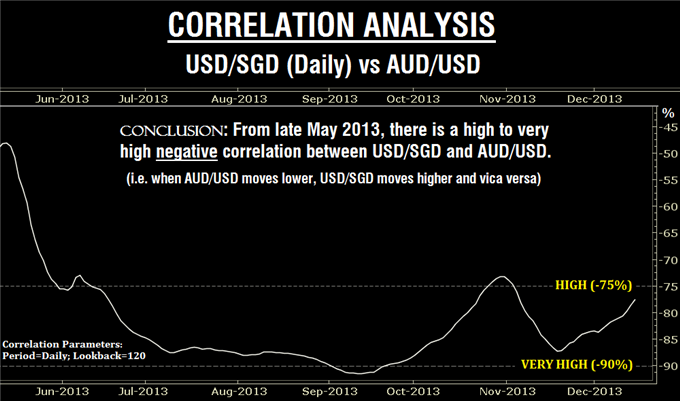 Further, a check of the AUDUSD chart (not shown) indicates a clear downtrend over the last two months (swing high October 23). This means that our preference is to find short trade set-ups for AUDUSD, and as there is a negative correlation between AUDUSD and USDSGD, we should ideally be looking for long USDSGD trade set-ups, and that’s exactly what we’re proposing here.

This five-minute USDSGD chart shows the recent corrective zig-zag to the yellow wave ii low at 1.2566. The three-wave move has an impulsive green wave a followed by a green triangle, labelled ‘b.’ 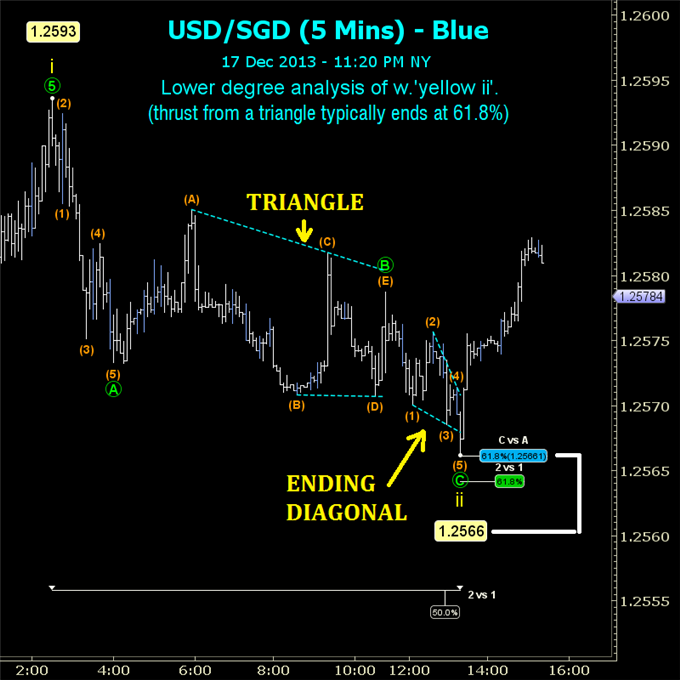 Thrusts from triangles are terminal and typically end at 61.8% of the move leading into the triangle. The C vs. A 61.8% level was 1.2566, and it’s interesting to see that the thrust out of the triangle ended exactly at 1.2566. Funny to think that there are still people who dismiss the power of Elliott Wave!