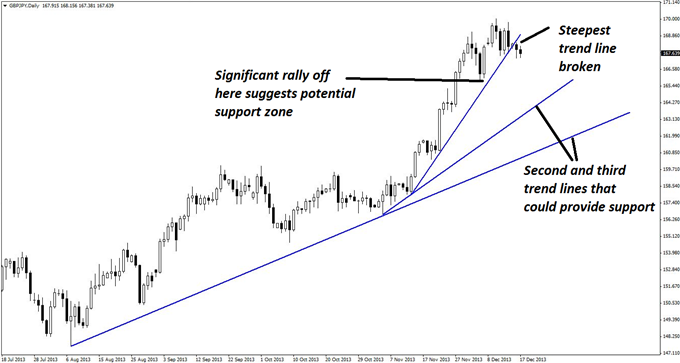 Good Chance to Buy GBP/JPY on a Pullback

As we enter the holiday season, prices are getting noticeably choppier. Many of the major currency pairs have been consolidating on the hourly time frame for the past two days, and it has been generally unsafe to enter.

By and large, the crosses have been trending without a sufficient pullback on which to enter, and only the British pound (GBP) crosses have anything especially interesting setting up right now. That said, due to the choppiness of most major pairs, it would be unwise to enter the fray at current prices, as in this environment especially, trading accounts can be quickly chopped to bits.

Thus, the solution would be only to take set-ups for which the entry point is far enough away that it would not get caught up in the wiggles, but that is still close enough that it could realistically trigger. We find such an opportunity setting up now in GBPJPY.

The daily chart below demonstrates a broken trend line, and following classical theory, price should wander down to test the second and third trend lines. However, a closer look at price action suggests that there is a horizontal area of support which may, in fact, come into play.

This is particularly true because the broken trend line has not yet been meaningfully re-tested. Thus, a logical conclusion would be that there might be a reasonable bounce off this zone to bring price back to touch the underside of the steepest trend line.

This scenario is demonstrated on the four-hour chart of GBPJPY below: 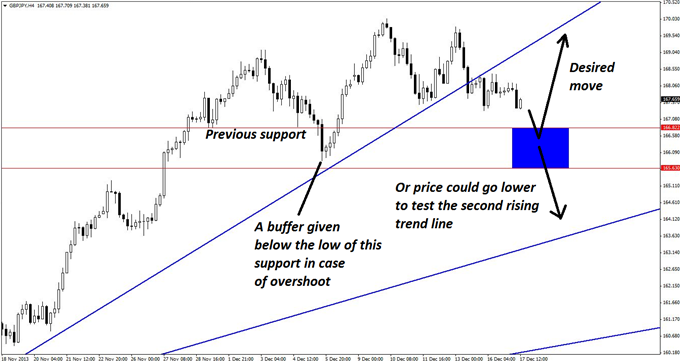 As always, price will do exactly what it wants, including break the previous zone of support. Nonetheless, this is a very reasonable area from which to go long. There should be at least a sufficient reaction in price after coming down to test the support zone.

However, this being the infamous GBPJPY, and being the holiday season to boot, a certain amount of choppiness can be expected, and for this reason, a slight buffer has been given when estimating the bottom of the support zone.

The top has been obtained from previous support levels in price. In the final analysis, the support zone emerges as 165.63-166.82.

The ideal time frame for trading this set-up would be on the hourly chart (not shown). Price is currently hesitating to go further down, and it may even fail to reach this zone. However, in a period of increased caution and choppiness, missing a trade is preferable to being in one and regretting it.

Viable trade triggers would be the usual pin bars, bullish engulfing patterns, and/or bullish reversal divergence on the hourly chart.

There is an important note here regarding the two or three tries that are typically recommended when looking to enter new trades. As markets become choppy, one try will rarely do it. Some traders may even choose to skip the first entry while expecting it to fail, and will instead take the second entry. While this is safer (in a sense), it also means that if the move runs straight away, they will be left behind with no position.

Individual traders will have to weigh this decision and decide for themselves what is best. What is obvious is that a much more defensive style of trading is now in order, so be sure to enter multiple positions in this trade so that scaling out will be possible should the trade trigger but then show signs of not working.