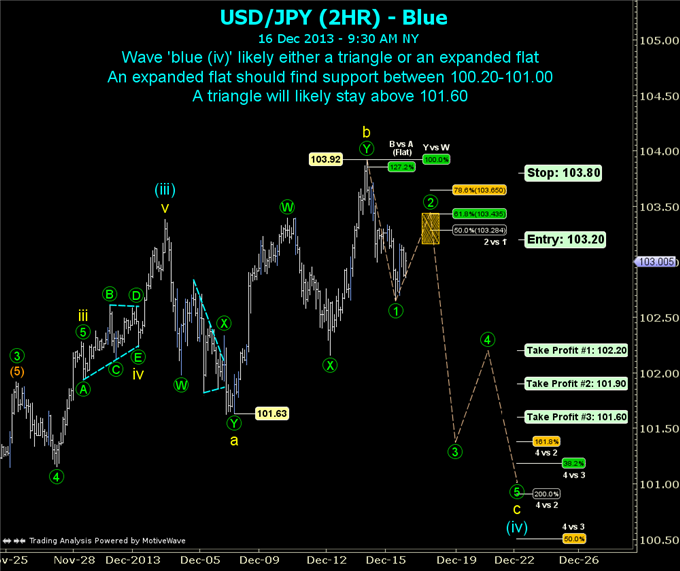 An Updated Short Set-up in USD/JPY

Last Friday (December 13), we set up a short trade in USDJPY in advance of this week’s Federal Open Market Committee (FOMC) meeting. Since then, further downside price action has necessitated an update to that set-up.

The two-hour chart of USDJPY below shows an expected movement lower by way of the yellow c wave of the blue wave (iv), which is likely tracing out an expanded flat.

The reason for this preference is due to analysis of other instruments that tend to move in line with USDJPY, the most correlated of which is the Nikkei 225 stock index. As seen below, we are showing USDJPY and the Nikkei “cash index,” which trades very limited hours each weekday. In comparison, the Nikkei futures trade almost 24 hours each weekday. 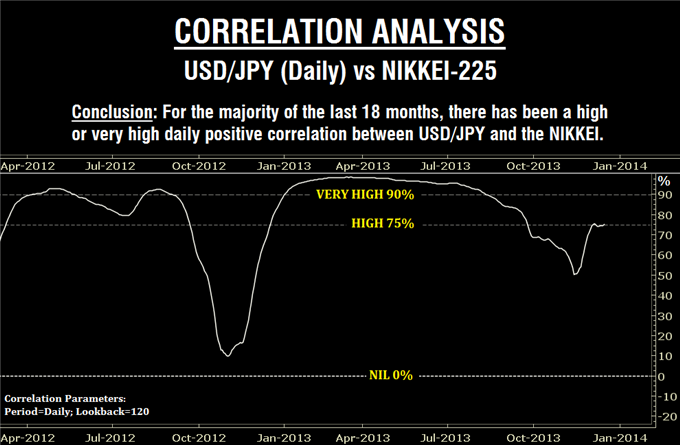 Correlations (like trends) are seldom constant, and the chart shows the fluctuations between USDJPY and the Nikkei 225 over the past 18 months. A high degree of correlation is present when the two markets reach a 75% level, while a 90% reading indicates very strong correlation.

Here, it’s clear that for most of the last 18 months, USDJPY and the Nikkei have been highly or very highly correlated. Further, the current level of correlation is 75% (i.e. high).

As the USDJPY blue wave (iv) began in early December, the Nikkei chart below shows price action for that same period. From the December 3 high, both moved down in “a” waves and then rose in “b” waves. 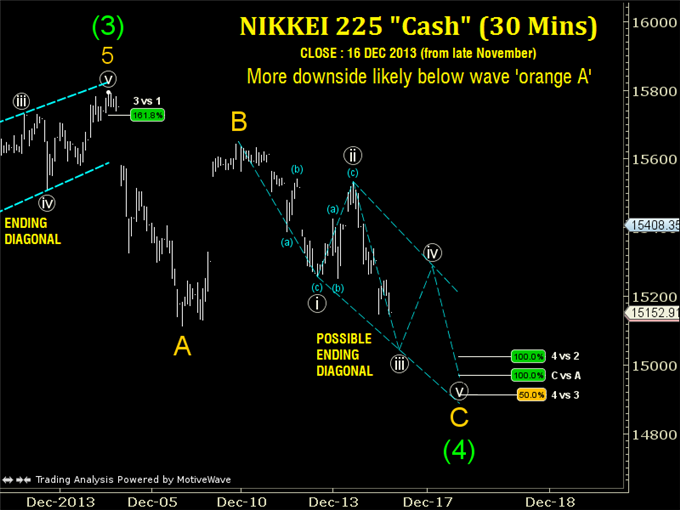 Both the Nikkei and USDJPY are moving lower in “C” waves and are expected to continue in that direction over the next week. However, you will notice the Nikkei is testing the early-December low at around the 15,200 level, while USDJPY has not yet progressed to the equivalent low. We believe that the US dollar (USD) is showing signs of weakness heading into the FOMC meeting, and USDJPY is about to play downside catch-up.

To set an entry and participate in this upcoming move, we need to move down to a smaller time frame in order to dissect the move from 103.92. The 15-minute chart below shows a completed five-wave impulsive move from 103.92 which is labelled as green wave 1. 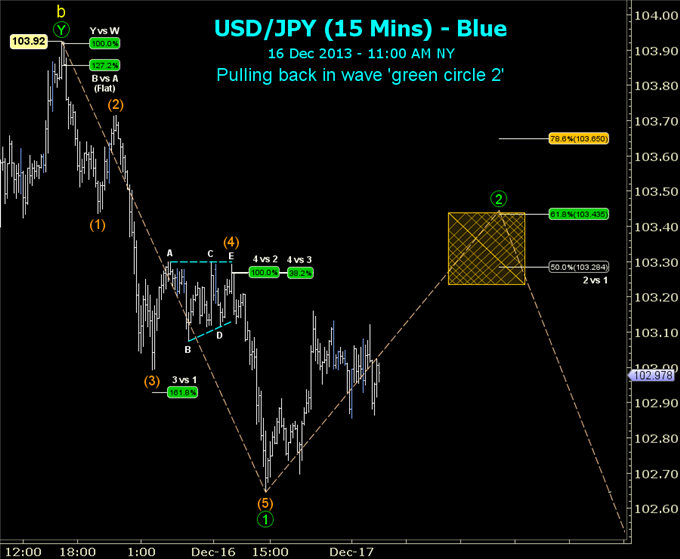 The green wave-2 pullback is expected to reach the 50% retracement level (i.e. 103.28) of the bearish impulsive move. Therefore, our entry for this set-up will be slightly in front of this level, at 103.20.

There are a couple of ways to set a stop in this scenario. The more conservative is to set the stop where the Elliott Wave count is “wrong,” which in this case, is behind 103.92. We’d prefer to set the stop behind the 78.6% retracement level (i.e. behind 103.65) at 103.80, however, because this allows for a slight spike through this level and the USDJPY spread. Our preferred stop is, therefore, 60 pips. Typically, the 78.6% retracement level tends to be the “level of last resort.”

From a risk/reward perspective, the trade is risking 60 pips and looking for a reward of 100 pips on the first target. Therefore, we’re risking $6 to make $10, which is an acceptable ratio. The second target is 130 pips, and the third target is 160 pips (both targets are looking for more than twice the amount of the risk).