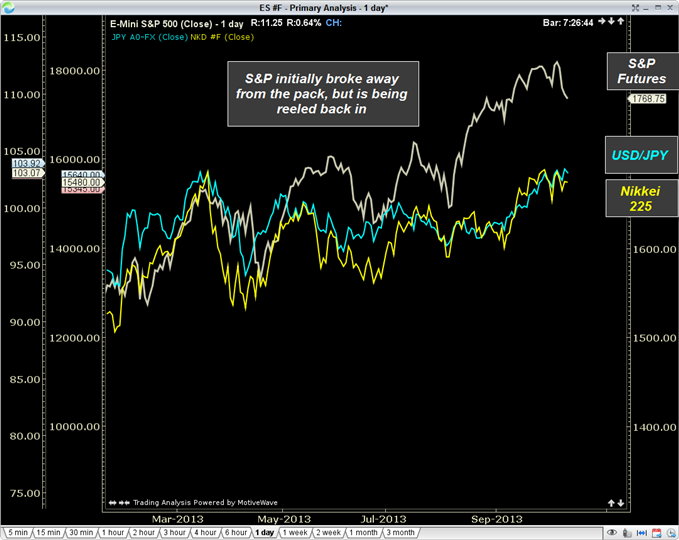 Before we look to set up any trade in the FX markets, we like to identify in which “sandbox” our currency pair is playing. What I mean by that is which markets, currencies, or other assets correlate to our FX trade.

Today’s set-up is in USDJPY, and as the intermarket overlay chart below clearly shows, the pair is playing in the sandbox with both S&P futures and Nikkei futures.

Looking closer at the chart above, you will see all three markets were playing nicely together right up until fall 2013, when the S&P 500 broke higher and left USDJPY and the Nikkei behind. Only in the last week has the S&P begun to be reeled back in.

This is quite interesting as we head into the key Federal Open Market Committee (FOMC) meeting, and if we do get an announcement about Fed tapering, it would go a long ways toward further closing this gap.

The S&P is trading with a weak tone at present, and at the time of writing, I’m watching the Nikkei futures drop.

The three-hour chart of Nikkei futures (see below) is tracing out a white, “a-b-c” decline (see circles) that has an immediate downside target of 15,235, or the A-wave low. More than likely, that level will be exceeded and sellers will make an attempt at the 15,065 low. 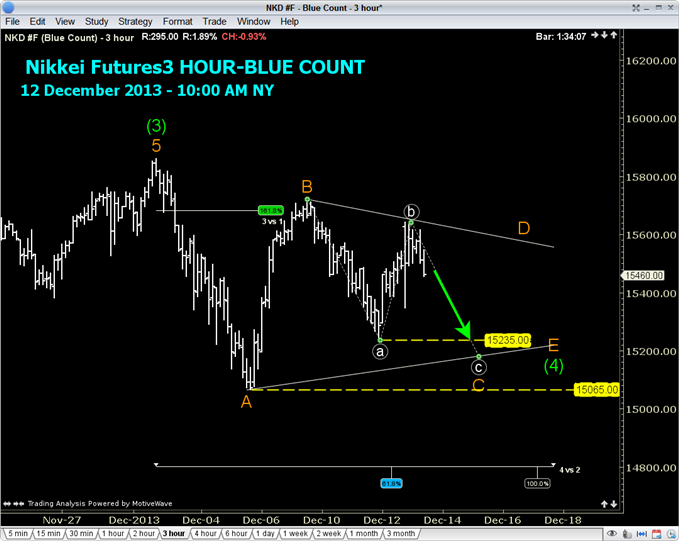 Referring back to the intermarket correlation between USDJPY, the S&P, and the Nikkei, if those stock indices were to fall, you can be quite sure that we’ll see USDJPY move lower as well, regardless of what happens with the FOMC meeting on December 18.

Looking to the USDJPY chart below, we see USDJPY is also projected to move lower in as part of wave c (in yellow) to around the 101.00 handle. Using the Elliott Wave principle, this c-wave should sub-divide into a five-wave structure. So far, wave 1 looks to be complete, and a wave-2 correction is pending, which will present our trading opportunity. 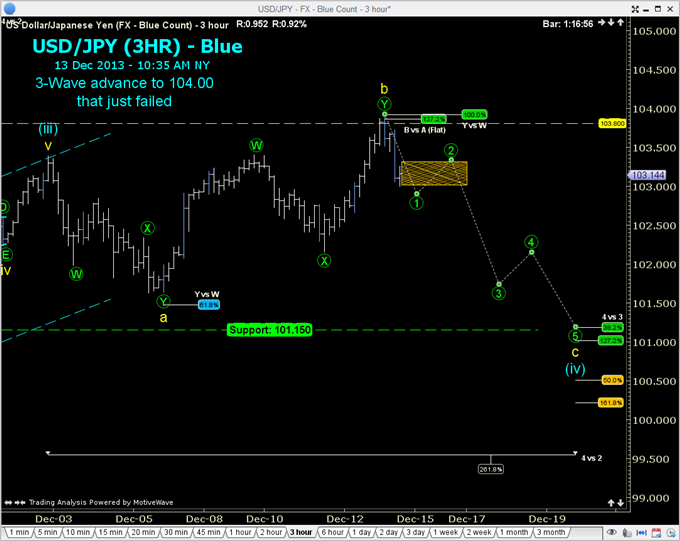 More: For more candid, in-depth analysis on USDJPY, check out this video explaining the basis behind this trade.