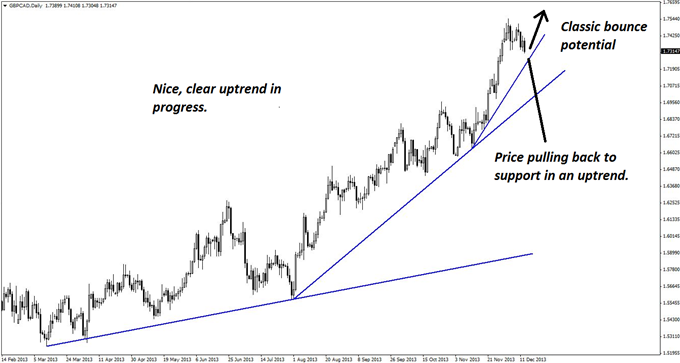 A Near-Perfect Buy Set-up in GBP/CAD

As the trend lines on the daily chart below indicate, the uptrend in GBPCAD that has been in place since early this year is accelerating upwards. Now, every trader dreams of trading a parabolic move all the way up, but realistically, most trends do not last this long, and that is the flaw with this trade.

Nonetheless, a strong plus in favor of this trade is the fact that there are likely to be a lot of bullish traders, and even if this is close to the end of the trend, even a knee-jerk reaction upwards will provide plenty of profit potential.

The four-hour chart below offers Elliott Wave enthusiasts plenty of fodder for thought. Based on the latest and steepest rising trend line, price appears to have completed a three-wave pattern up and is currently in a wave-four pullback. 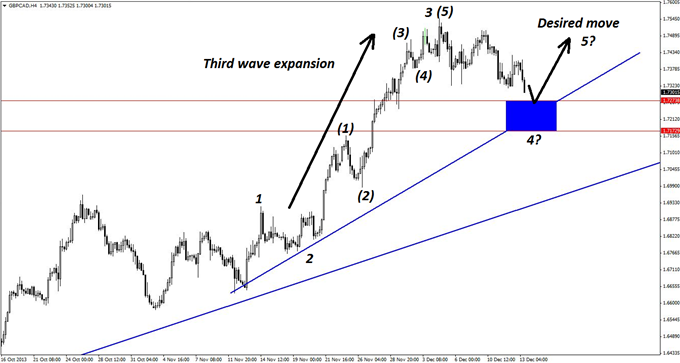 This chart is especially educational in two respects:

For those who do not care for complex wave counts, the trading scenario is simple: support is to be estimated from the rising line of support, giving a zone of 1.7172-1.7273.

This pattern is best traded on the hourly chart (not shown). Traders would be well advised to wait for price to touch this key support zone and then looking for a bullish reversal divergence, pin bar, or bullish engulfing pattern as a potential trigger for the trade. As always, be prepared to give the trade two or three tries.

One question that regular readers may have is whether a set-up is worth two or three tries, and the answer is that it usually is, provided that careful consideration has been given to risk/reward. By waiting for the triggers to appear, the risk taken will decrease significantly, both because there has been some sign of reversal, and because it will enable a smaller stop loss.

Although, in this case, the support zone is approximately 100 pips deep, the stop loss will likely develop in the 30-40 pip range. Compare that to the daily chart, which has an average true range of 121 pips.

Even an average-sized daily move would be more than sufficient to turn this trade into one with fantastic reward for risk, not to mention what would happen if the trend continued merrily on its way.