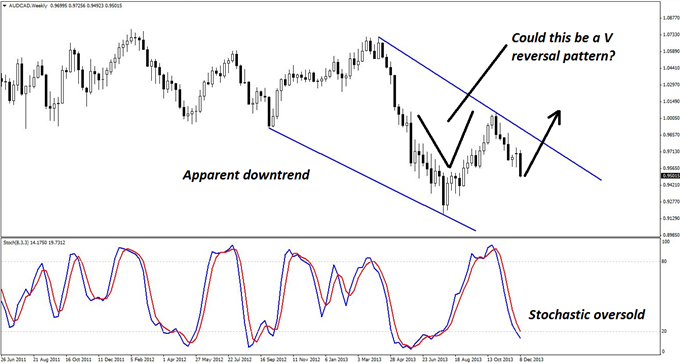 A Rare Reversal Pattern in AUD/CAD

There have been a couple recent trades that suddenly turned and ran in the other direction before reaching the key support and resistance zones where risk could be better controlled. As a result, these set-ups never triggered. Notable among these is the short set-up in EURGBP we spotted on Tuesday, and this long intraday continuation trade in EURAUD we discussed early Wednesday.

While this may be frustrating for newer traders, it actually provides valuable feedback about the trading process, and this information can be acted upon. Now, a single trade that runs away and doesn’t trigger is just par for the course in trading, but when they line up in a row like this, several important observations can be made.

In particular, these trades indicate that:

This is an incredibly important point, because traders who define themselves by one single time frame will likely fall victim to this shift in overall momentum structure. They will either get into choppy and confusing markets, or will not have legitimate set-ups and will be forced to stand aside.

As one man's trash is another man's treasure, even two missed trades in a row is a sign to pay attention to other time frames, and that’s precisely how we’ve uncovered the AUDCAD swing trade set-up described in this latest article.

As shown below, the weekly chart of AUDCAD is in a downtrend, but the last move up provides some suspicion due to the symmetry of the legs, which form a “V bottom.” Such patterns are comparatively rare, but can prove to be early trend-reversal signals.

If the bottom has indeed been made, then there are a few patterns that can develop, the most popular ones being the double bottom and the 1-2-3 bottom. In this case, it is the latter that we are interested in, as it essentially says that price should soon form a higher bottom.

On the daily chart below, price is headed down as part of an unusual pattern, the expanding wedge. It is also giving a reversal divergence, which suggests that it should at least hesitate and potentially turn up soon. 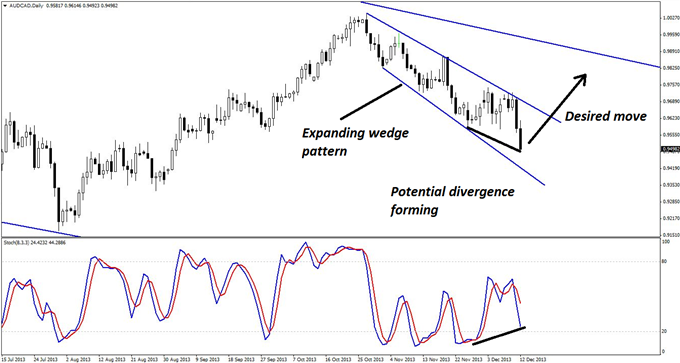 A look to the left of the current price will reveal a lot of previous support and resistance, providing a reasonable area to consider a countertrend bounce. Thus, the logical zone of support is between the horizontal support/resistance and the declining line of support from the wedge, which is shown on the four-hour chart below.

Based on the above arguments, the support zone has been estimated at 0.9396-0.9500. This 104-pip zone may seem like a rather large amount, but this is a swing trade to be taken on the four-hour chart instead of the usual hourly chart. 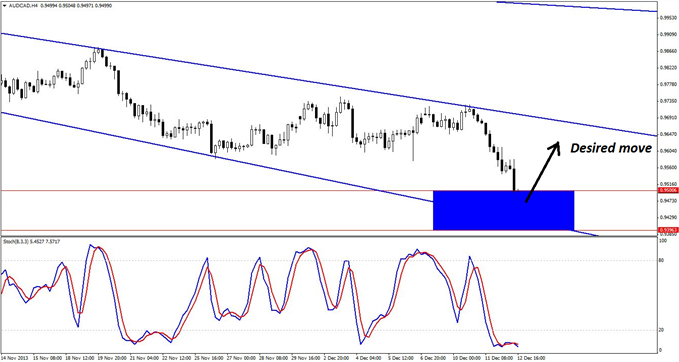 As a result of the swing nature of this trade, this is a reasonable support zone, especially in light of the fact that the initial target on the first line of resistance is nearly 200 pips away.

As always, a reversal divergence, pin bar, or bullish engulfing pattern (on the four-hour chart) will be valid triggers for this trade, and traders should be willing to take two or three tries at entering in order to make this trade work.