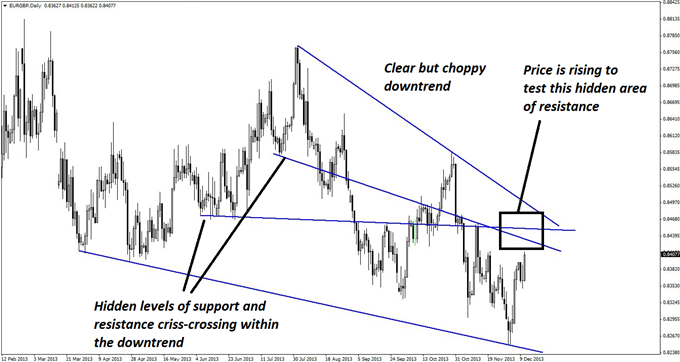 The daily chart for EURGBP shows the pair in a choppy downtrend. Given these conditions, applying the usual strategy of selling rallies in a downtrend would be advisable, except that in this case, there are two hidden levels of resistance that are likely to go unnoticed by most traders.

Most traders would wait for the top of the downward wedge to be tested before initiating a short, but the presence of this interesting confluence of resistance offers an alternative entry. It may well be only temporary resistance, but even a small bounce on the daily chart will result in a reasonable trade on the lower time frames.

The four-hour chart below provides more insight into how this situation can best be traded. At this time frame, a five-wave Elliott count appears to be in progress as price rises towards resistance. 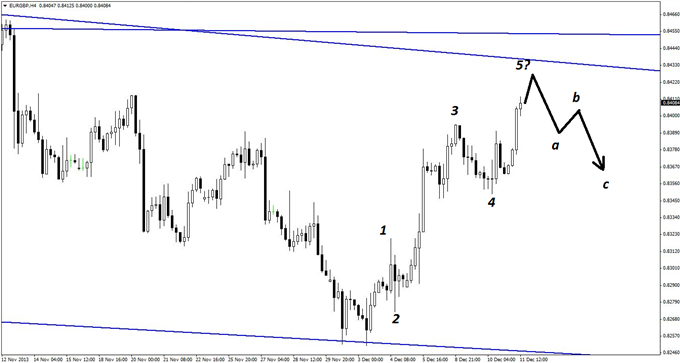 Three iron-clad Elliott Wave rules have been honored thus far. Those rules are:

The adherence to these critical rules suggests that price is in a wave 5 move up to resistance. For traders, this indicates:

Wave counts can easily go awry, however. Thus, the best response in this situation would be to focus on getting in at the top of wave 5 with as little risk as possible, and then manage the trade accordingly.

Whether or not the a-b-c wave scenario illustrated above manifests itself is unclear, and as always, that’s for the market to decide. What is clear, however, is that the hourly time frame will provide the best trigger, allowing traders to realize the most favorable risk/reward profile for this trade. 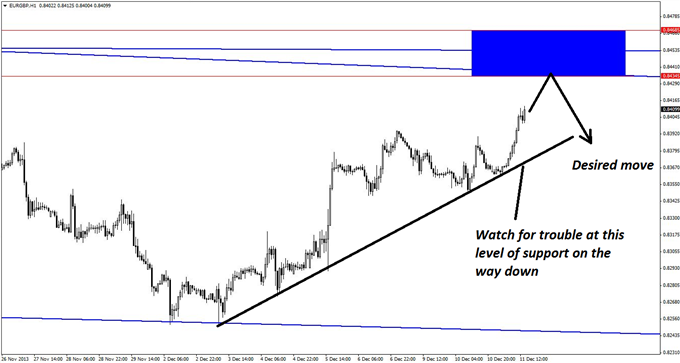 The key zone of resistance is a little more ambiguous than usual, but erring on the side of caution, it can be estimated as 0.8434-0.8468. The disadvantage of this particular estimation is that wave 5 may not get there before giving a significant turn. If that happens, this trade will be null and void, even if price eventually does rise to this level.

However, given the hidden nature of the resistance levels used, a more conservative estimation has been made to account for the potential of mild overshooting.

Viable triggers will consist of the usual suspects: pin bars, bearish engulfing patterns, and bearish reversal divergence on the hourly chart. This trade, like many we target, should be given two or three tries, depending on the personal rules of the trader.

It is also worth pointing out that there will be a level of support to contend with on the way down, and if price fails to break that level conclusively, then it will be a sign to scale out and move stops, effectively reducing the overall risk on this trade.