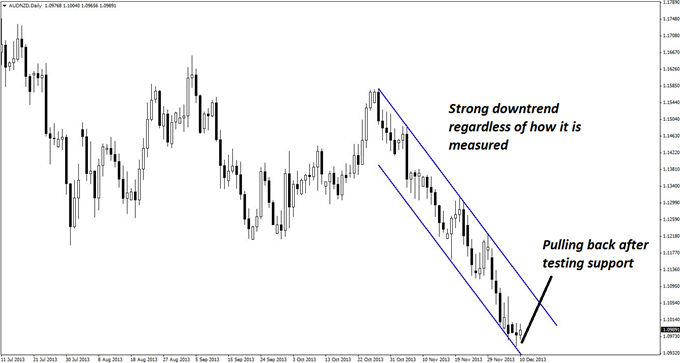 A "Bread-and-Butter" Trade in AUD/NZD

The markets have been relatively benign of late, and our recent trades have produced rather consistent profits. (View complete trade results on StraightTalkTrading.com.) Usually, overly positive or negative periods are signs of an upcoming shift in the market environment, and although this recent run has been mostly positive with only the occasional glitch, it shows a market behaving in a sustainable manner. As always, however, things can turn on a dime, but the prevailing outlook at this time is generally optimistic.

Today, AUDNZD provides a “bread-and-butter” type of trade with just a slight twist that must be accounted for.

The daily chart below is beginning an upward pullback, which is a good place to enter the strong downtrend. However, the key risk factor is that support, as represented by the bottom of the channel, has just been tested. This could potentially create a bounce that lasts longer than a day or two.

Nonetheless, it is still wiser to side with the shorts instead of the longs in this case, and as a result, a lower-time-frame entry would be needed to give greater precision and the ability to manage risk more efficiently.

The challenge with this particular trade would be in noting the special candlestick formation on the four-hour chart (see below) that is to be used as a resistance level. 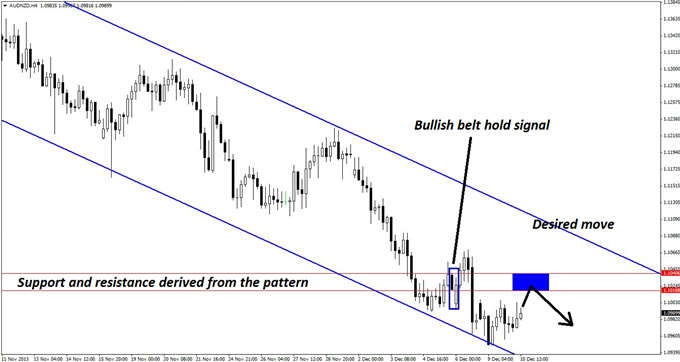 Many traders may not even notice the bullish belt hold candlestick pattern present in the previous congestion zone. This pattern consists of a downward move, which began with the bearish black candlestick, followed by a gap down, which was quickly reversed on the next (bullish) candle.

This is the equivalent of an "oops" pattern, which suggests that price mistakenly gapped past support and then corrected itself. This scenario reveals a hidden zone of support (now turned resistance) at the bottom of a bearish candlestick.

Given how small this zone is relative to price action, the preferred time frame for this trade is the 15-minute chart (not shown), although the hourly chart would be permissible as well. On both time frames, the signals to look for would be bearish reversal divergence, pin bars, and bearish engulfing patterns.

The disadvantage of using the hourly chart is that it may provide an entry signal too late, forcing traders to use larger stop losses. Thus, the trade should be taken on whichever time frame provides the first clear entry.

It is worth giving this set-up two or three tries, but given how strong the downtrend is on the daily chart, it is likely that one or two would suffice.

Also, it would be useful to have at least two positions per trade so that part of the trade can be scaled out should trouble arise. In a trend trade such as this, it is less of an issue, but given the risk of a longer-term pullback, it is always advantageous to have that option.