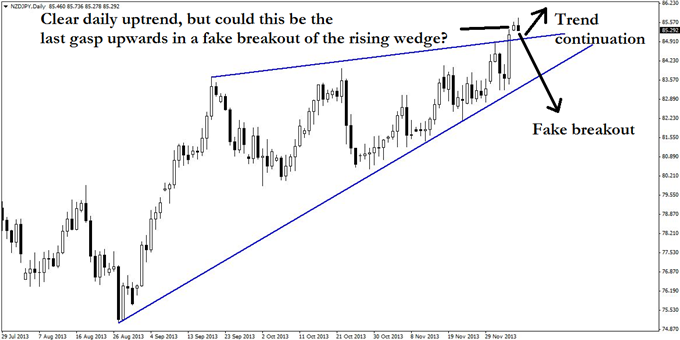 A NZD/JPY Long with Momentum on Its Side

Mondays tend to be slower trading days, and this week is no exception. Nonetheless, NZDJPY has lined up what could be a sequence of potential trades, but these must be taken with some caution.

The daily chart below is demonstrating a clear uptrend, which is always an excellent reason to go long. However, it has just broken to the upside, rising out of a rising wedge formation. Given that price has a bad habit of breaking above rising wedges and then suddenly shooting down, this could just as likely be a danger signal.

Without a crystal ball, the best response in this scenario is to take longs on lower time frames using less risk than normal. The trader has to be prepared to accept the fact that on the one hand, price may touch the nearest support level and soar upwards, but on the other hand, it may do a series of bumpy fake upturns while actually tracing a false breakout.

Thus, in addition to lower-than-normal risk, the trader would also be advised to use multiple positions, scalping part of the total trade very quickly in order to move the trade to breakeven or minimum risk as soon as possible. The one advantage trend traders have is that even if the direction of this trade is ultimately wrong, the uptrend is likely to prove forgiving and provide reduced-loss exit opportunities.

The four-hour chart below is also quite unrevealing beyond the suggestion of a rising channel. The desired move up depends on price bouncing higher before penetrating the resistance-turned-support from the daily wedge. 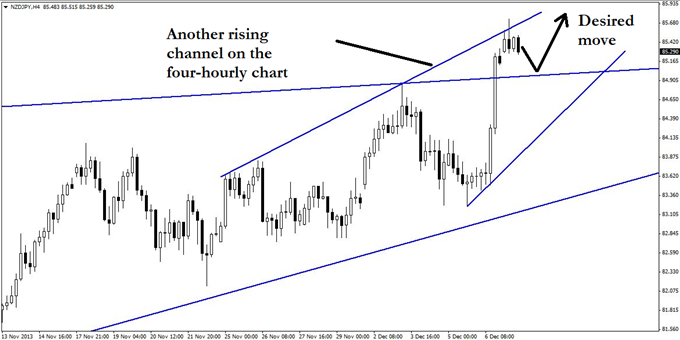 One of the stronger arguments in favor of this trade is the immense momentum move that occurred recently. If the break higher is true, that momentum should return quickly and show its hand as sellers try to press down to re-test the indicated support. Thus, the ideal turning point is actually in front of the line of support, and not exactly on it.

Following that line of reasoning, the support zone on the hourly chart below has been narrowed down to 84.97-85.18. This thin zone cannot be meaningfully traded from the hourly chart, however, so an entry on the 15-minute chart (not shown) is preferred. One should try to enter long on a bullish pin bar, bullish engulfing pattern, or reversal divergence on the 15-minute chart. 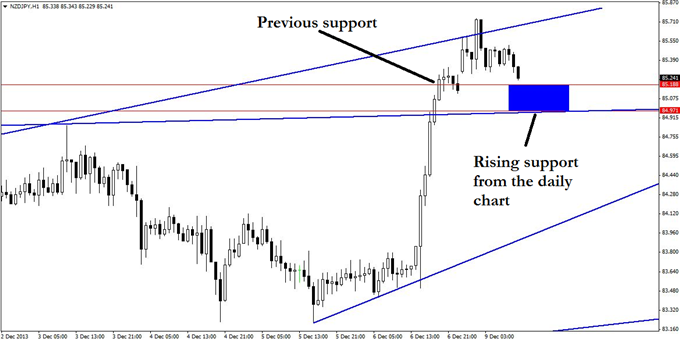 As discussed previously, this is a defensive trade. Thus, part of the position should be removed at the first sign of trouble. Two or three tries may be needed to get in, but with this being such a thin support zone, should the trade prove to be a losing one, it is unlikely to trigger three times.

Clearly, there are arguments for and against this trade. More conservative traders might want to sit this one out and instead wait for a better and clearer opportunity. Those with more intraday experience, however, could give this a legitimate try, and if it works, it would afford exposure into a nice trend on very low risk.