The trade set-up we took yesterday in GBPNZD worked beautifully on the second try, and now, as some of the FX crosses rewind to give more trend trades, a better and more rewarding market environment could be dawning.

Nonetheless, today’s GBPCHF trade, which looks a lot like the last two solid trend trades we took, has a hidden danger on the weekly chart.

The GBPCHF weekly chart has been twisting and turning in time to the (8,3,3) stochastic for practically all of 2013. In fact, the last five major turns in price were almost perfectly aligned with stochastic crosses.

Now, there will be those who scoff and point out that the stochastic (and any other oscillator, for that matter) can remain overbought or oversold for a long time, as it did at the end of 2012 and early 2013. This is true, but oscillators function best in consolidating environments, not trending ones, and the weekly chart of GBPCHF is most certainly consolidating.

Thus, it is with some suspicion that the mantra of buying dips in an uptrend is applied. Nonetheless, it is still the best response to this situation, as the reward for risk always favors staying with the trend.

Even if this turns out to be a smaller trade, there should be ample room for profit.

On the daily chart below, price has pulled back neatly to rising support within a wedge pattern. Admittedly, however, the level of support may vary, depending on who draws which trend line. 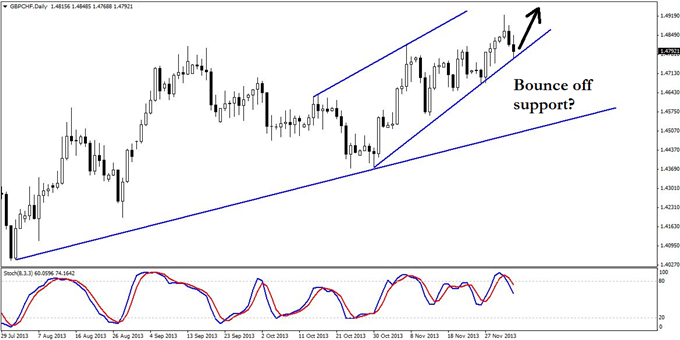 Thus, some deeper analysis on a lower time frame is called for, and for that, we turn to the four-hour chart below. To get a better level of support, the zone has been estimated not just from the rising trend line, but also a confluence of multiple levels of support and resistance from previous swings. The final support zone is 1.4740-1.4775. 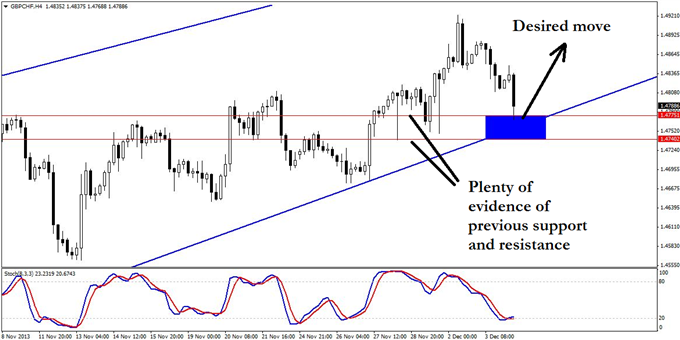 Price has already touched this zone, but that was mainly on a reflexive shock in the British pound on the heels of slightly-worse-than-expected UK PMI services data.

The more interesting news for today will be the ADP non-farm employment change announcement, and while some may choose to avoid this set-up due to the looming data, if this trade does materialize before then, it would still be a legitimate set-up.

The trigger is to be found on the hourly chart (see below), with the usual pin bars, bullish engulfing patterns, or bullish reversal divergence all coming as potential catalysts. All three are possible at this point, too. 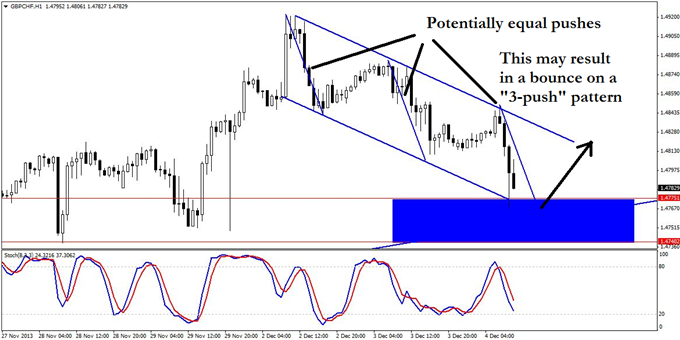 Having jitters about this trade would be understandable with price barrelling towards support with considerable momentum. However, a potential three-push pattern is developing on the hourly chart, as indicated. The projected termination point of this pattern falls conveniently within the support zone, and that provides an added element of validation about this trade.

Given the presence of the ADP non-farm announcement, it is possible for the zone of support to be temporarily breached as the market reacts to news, but as long as there is no hourly candlestick closing below the indicated support zone, the set-up would still be considered valid.