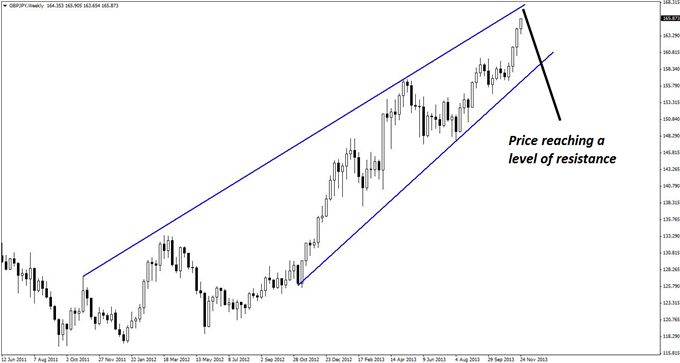 A Daring GBP/JPY Trade That's Well Worth the Risk

The market has proven a little gun shy lately, avoiding entering safe support and resistance zones where risk on new positions can be better controlled. This happened twice this week, both in the EURGBP short set-up we targeted on Monday and the GBPCAD long set-up we spotted Tuesday. Both trades turned sharply profitable just before price touched the support/resistance zones we identified as potential entry areas.

This is usually when more inexperienced traders start thinking about how a small tweak to their strategy would have allowed them to catch those trades. However, without serious testing, this is very ill-advised, as even "small" tweaks to a working strategy usually result in only a few more winners while opening the floodgates to more losing trades and a bevy of unforeseen problems.

Instead, the best thing to do is keep plugging away using the existing strategy, even if it means narrowly missing new entry opportunities. As there have been no trades, there have been no losses, either, and that is far preferable to suffering through losing trades.

As experienced traders will have noticed, virtually every strategy goes through periods of being miraculously correct, being dead wrong, and being everything in between. This is just one of those "in-between" phases.

In sticking with the current strategy, today, we highlight a countertrend trade on the “big kahuna” of volatility, GBPJPY.

On the weekly chart below, price is reaching upwards to test the resistance offered by the top of a very large wedge pattern. Indeed, this pattern is so large that it could qualify as a monthly wedge.

That very large wedge alone would not be reason enough to take this trade, however, so the daily chart must be examined, too. And, on the GBPJPY daily chart, we get the second piece of the puzzle, noting a second wedge pattern that is heading upwards to meet the longer-term resistance. 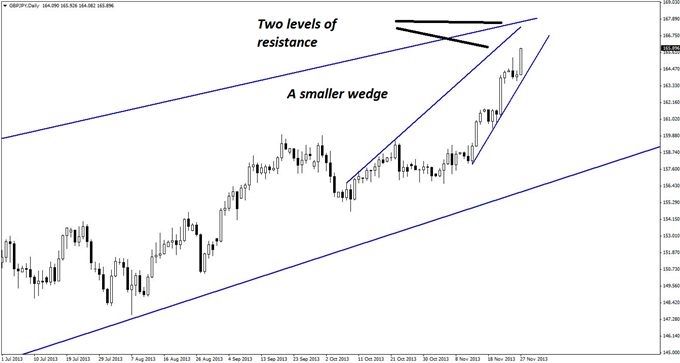 Now, two levels of resistance might justify a trend trade, but it is still insufficient to qualify for a countertrend trade. That’s why we look to the four-hour chart below, which offers resistance from a rising channel.

Perceptive traders will note that these lines can be drawn slightly differently, depending on one's interpretation, and thus, some leeway has been given in order to account for the resistance zone, which is identified as 166.28-168.01. 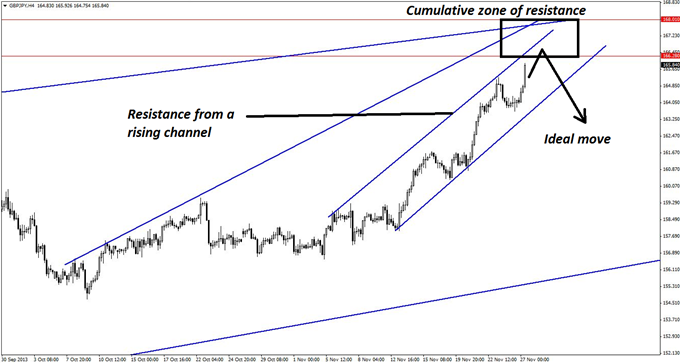 On the hourly chart below, the sudden rise in price may be alarming, but it is actually conforming to a saucer bottom breakout pattern. Standard charting technique has the pattern's resistance at a height equal to the saucer's depth, which, in this case, is well within the resistance zone already projected.

Some purists may disagree with the use of this pattern in a continuation market, but practical experience suggests that it works perfectly well. 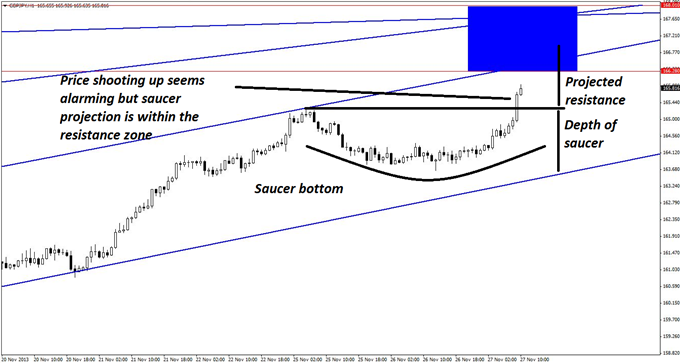 This trade is to be taken on the hourly chart using the usual reversal divergence, pin bars, and/or bearish engulfing patterns as triggers. As always, be prepared to take two or three tries to get the entry right. This is particularly true this time due to the countertrend nature of the trade.

As newer traders are always salivating at the prospect of catching a countertrend top or bottom, it is the aim of this article to highlight the importance of meticulous analysis before initiating such a trade.

Very simply put, the probability of being wrong on a countertrend trade is flat-out higher, especially in pairs like GBPJPY, which are famous for chewing up accounts in very short order.

The more faint-of-heart may wish to sit this one out, and in light of that, a most pertinent question would be, "Why take this trade at all?"

In this case, the answer lies in plain view on the GBPJPY monthly chart. 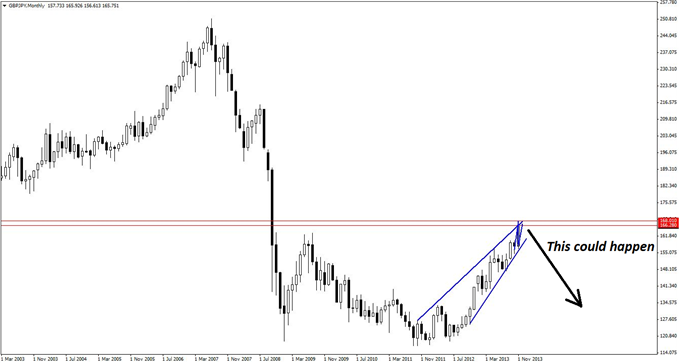 The monthly chart could well be in a large range consolidation, and price is at the potential high of that range. If this scenario works out, this could be the first trade of many that ride a move down and potentially cover several thousand pips.

Needless to say, that would be a more-than-reasonable trade-off for the lower-probability nature of this trade!