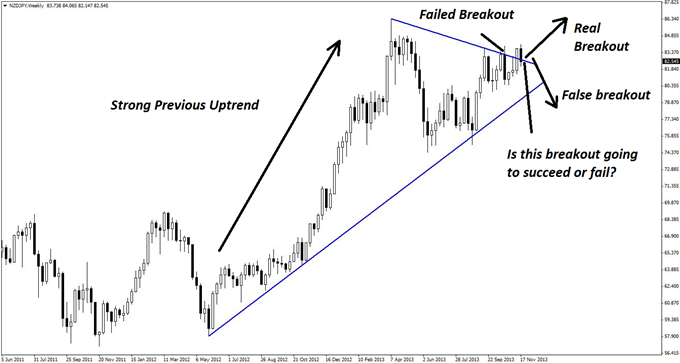 The weekly chart of NZDJPY is now at an extremely interesting juncture. Last week, price broke out of a triangle consolidation pattern with a strong bias to the upside, as seen below.

This week, prices have come back to retest the broken line of resistance as potential support. Given that it is already Friday, the result of this test should come either today or early next week.

If the break is real, then the projections for profit would be phenomenal. If it is false, then there is a generous amount of space to the rising line of support for intraday traders to profit from. Either way, this broken trend line is a promising hair-trigger set-up for volatility to come.

The daily chart below shows a rising line of support from a triangle of its own. As price heads down to test the support level of this triangle, traders will have an opportunity to ride the move upwards on the bounce, hopefully into a prolonged weekly trend. 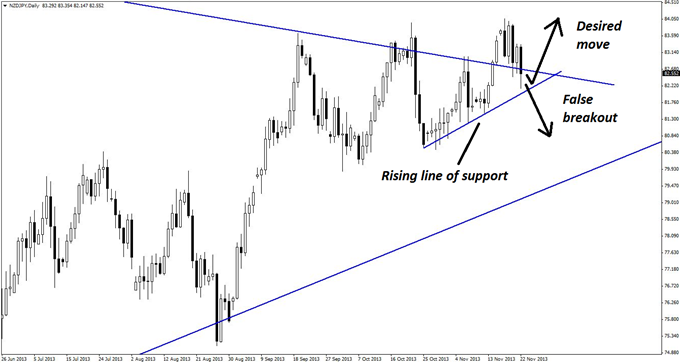 Of course, if a false breakout scenario develops, then the result should come just as swiftly, and future trades would be premised on a short bias.

However, because of the breakout, the weekly bias is long, no matter how precarious said breakout may be looking. After all, it is when most traders feel the greatest fear that the most profit is to be made. Thus, the trade is best designed using the daily rising support as an entry tool into the market.

Eagle-eyed readers would have realized that there are several ways to draw the rising line of support on the daily chart. Some would be more aggressive with steeper slopes, and some would be more conservative, using gentler ones.

Normally, this would not be a problem, but due to the potentially large variance in this case, the key zone of support is derived from a previous congestion area of price on the four-hourly chart. Thus, the support zone is 81.48-82.13. 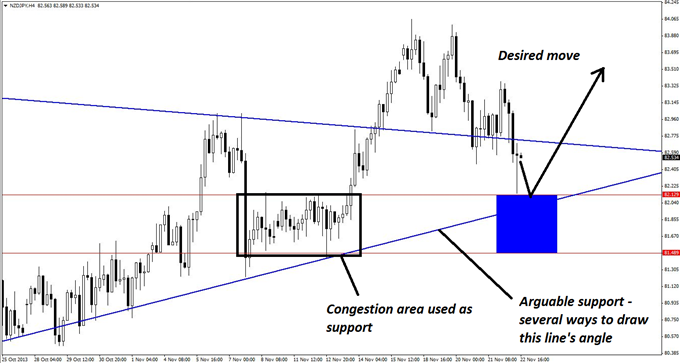 Although the four-hour chart has already given a long pin bar recently, there is a fairly reasonable chance of it coming down to this area, as congestion zones of this sort tend to be almost magnetic in nature. In fact, some believe that the previous equilibrium point between the bulls and bears must be retested to verify a higher-time-frame breakout.

Of course, the trade may just shoot up suddenly, in which case there will not be a problem, and we can move on to the next trade. However, if it turns out to be the low as price rises to confirm the weekly breakout, then this would be a very rewarding trade, indeed.

The trade should be taken on the hourly chart (not shown) on a pin bar, bullish engulfing pattern, or bullish reversal divergence. As this is a trade in the direction of the trend, there is no need to keep risk less than usual, as long as traders have prepared their accounts to take two or three tries at getting into a profitable move.