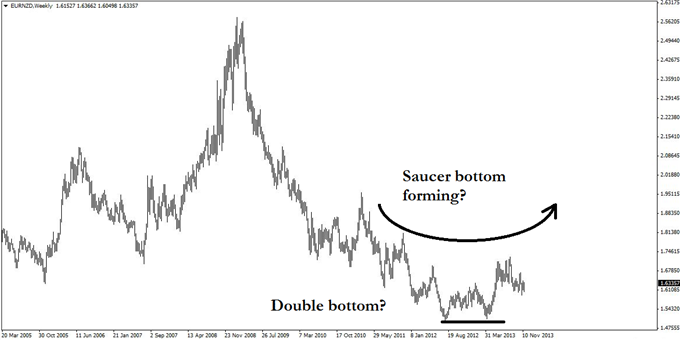 A EUR/NZD Pattern Rarely Ever Seen in Forex

The weekly chart of EURNZD is behaving unusually for a currency. It has formed a near-perfect double bottom (so far) and may be going on to form a saucer, or rounded bottom. This is unusual because both of these patterns, especially the saucer, are far more common in equity markets.

Those who are biased to the upside would not be wrong considering:

That being said, it is just as reasonable to go short EURNZD for these reasons:

Thus, the best approach would be to take longs and shorts as the opportunities arise, with a slight bias to the buy side.

On the daily chart below, the flag looks more like a wedge or pennant, depending on which school of chart pattern analysis one subscribes to. Either way, price has to break the upcoming resistance before it can head higher. 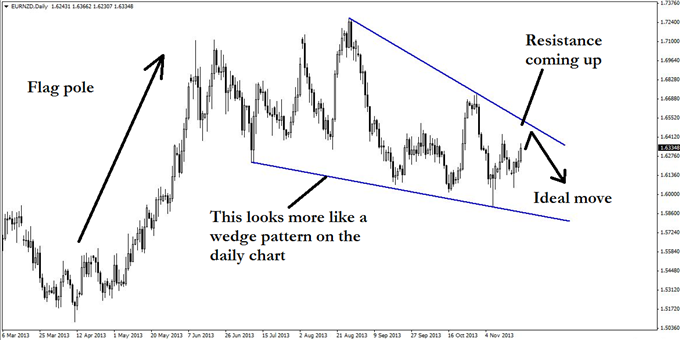 As the declining resistance line was composed over so many daily bars, there should be ample intraday opportunity for shorting it by way of an intraday scalp trade with an outside chance of turning it into a larger move. As discussed previously, the general bias slightly favors the upside on the weekly chart, so this trade must be managed defensively.

The four-hour chart below shows some surprising clues which suggest that prices may not reach the declining line of resistance before turning: 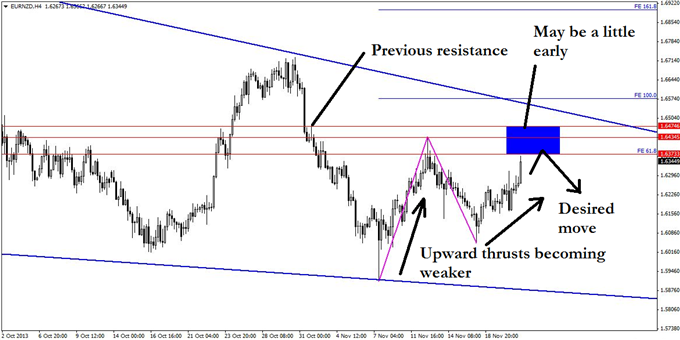 On the evidence, this makes the highlighted zone viable at least for a scalp. For the reasons previously discussed, this trade should definitely be broken into two parts so that a portion can be removed at the first sign of trouble. The other position should be moved defensively to breakeven and then trailed for a larger move.

The trigger would be on the hourly chart (not shown), with a pin bar, bearish engulfing pattern, or reversal divergence. As always, it is worth being prepared to give this set-up two or three tries in order to get the trade right.

In addition, for this particular case, it would also be wise to take a smaller-than-normal position just in case the trade only moves a small distance into profit before rallying upward to test the trend line properly. It’s a trade worth taking mainly because prices may never get to the resistance level, but it is most important to do this defensively.