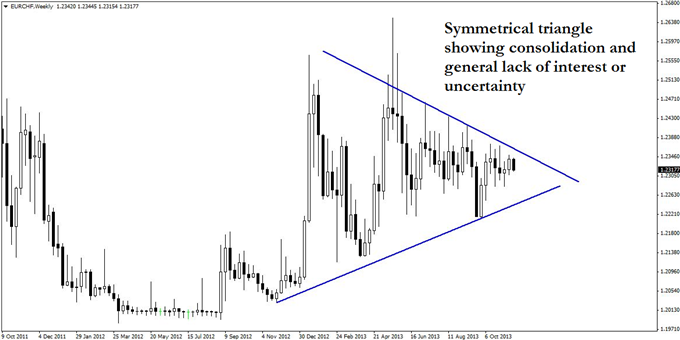 The Potential "Awakening" of EUR/CHF

The GBPAUD trade we discussed yesterday worked like a charm, and the results can be seen here on the Straight Talk Trading Blog.

Today, the attention turns to EURCHF, which is famous for the fact that from time to time, intervention will force the pair toward certain levels. A look at the weekly chart below confirms the declining interest of traders as it forms a nearly perfect symmetrical triangle pattern.

As always, all consolidating markets must eventually break out, and we are in the final third of the triangle as price winds towards the termination point. Of course, some triangles simply develop into more elongated sideways patterns, but a breakout at this point would be very significant.

In the meantime, traders can keep entering smaller-time-frame trades, hoping to ride it into a bigger trend.

The daily chart presents a triangle within a triangle. All this consolidation will break out at some point, and the question is whether to back the bounce or the break. There are arguments both ways, but the strongest argument would be that the most recent price action prior to the triangle was bullish, so a bounce seems like the more likely scenario. 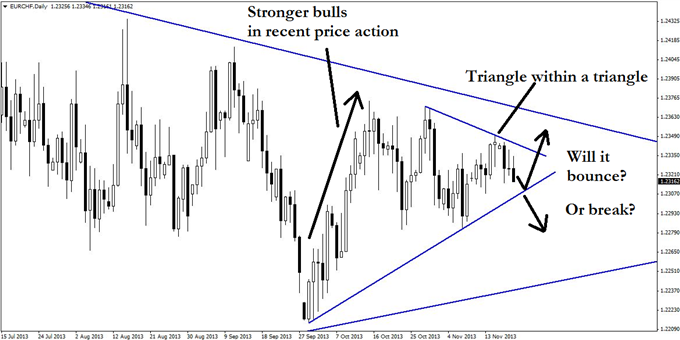 The four-hour chart below provides even more clues regarding support. Here, we see a confluence of support levels comprised of pin bars and a general estimate of the support from the rising trend line on the daily chart. Actually, price is already winding towards it.

Elliott wave fans will note the “N” formation of zig-zag 1, and that the inverse of that pattern may be in play as price goes towards support before it bounces. Of course, traders backing the break down will note that a head-and-shoulders pattern may also be forming. However, there is no telling who is right until the market gives the result.

For those uninterested in the technical jargon, the bottom line here is that the zone of support can be identified as 1.2294-1.2307.

A better entry could be taken on the hourly chart (not shown) if/when price gets to that zone, and the usual entry signals, including pin bars, bullish engulfing bars, and bullish reversal divergence, would be in play.

As always, it may take two or three tries to get it right, but in this case, price may well reverse suddenly upon reaching support. After all, abrupt turns are extremely common in consolidation territory, and if this happens, it will undoubtedly benefit the trade.