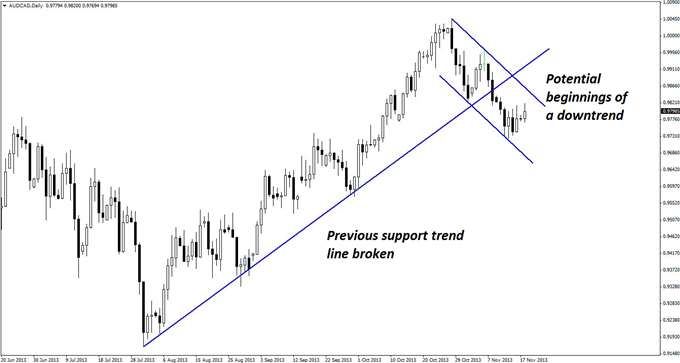 Long and Short Opportunities in AUD/CAD

AUDCAD is offering two trade possibilities as it begins to display a potential downtrend on the daily chart. A rising support line has been broken, but it is only now being retested. A declining channel is also potentially forming.

An actual downtrend still has yet to be formed, however. The lower high and lower low formation is encouraging, but the untested broken uptrend line is an issue. Before price gets there, it will have to deal with resistance from the declining channel, as shown on the daily chart.

In looking at the four-hour chart below, which magnifies the declining line of resistance from the downwards channel, an estimated resistance zone has been obtained between 0.9840 and 0.9878.

There is a rising wedge pattern, but given the daily chart pattern, it is anticipated that the price may overshoot upwards out of the wedge into the resistance zone before turning around. 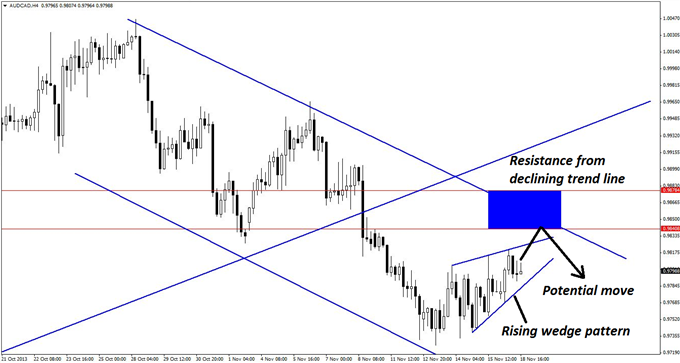 Of course, as indicated on the daily chart, this resistance may not be able to overcome the magnetic power of an untested broken trend line. However, it is a valid area for taking nibbles at the short side.

Traders should be ready to take one or two tries on the short side on the hourly chart should price rally to this area and give short signals like pin bars, bearish engulfing patterns, or reversal divergence.

At the time of writing, the pattern is far from ready to be traded, and it may take some time to get there. However, a lower time frame may offer a more immediate trading opportunity.

The hourly chart below shows a pennant, or triangle pattern, following a declining move and the formation of a pole.

Using the Fibonacci expansion tool and estimating a breakout level from the end of the triangle, a break to the downside would have to deal with support from the 0.9771-0.9783 zone. 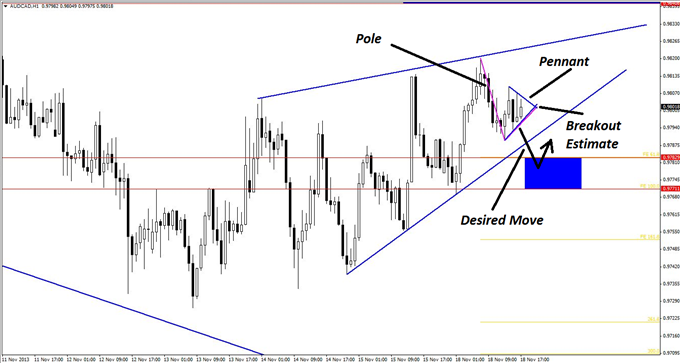 For those who want to understand the reasoning behind this long-entry opportunity:

Those who wish to prepare for the trading opportunity should be eyeing 15-minute-chart longs for this second set-up, which would be triggered especially by pin bars, although bullish engulfing patterns and reversal divergence would also be acceptable.

Keep in mind this is a countertrend trade, and so a large part of the position (up to 75%) should be taken out as defensively as possible at the first sign of trouble, with a small, longer-term component held just in case this trade runs a long way into profit. After all, the higher-time-frame short may fail as prices race up to retest the underside of the broken trend line on the daily chart.

In this transitioning AUDCAD market, the best response is to have a mindset and trading plan for both shorts and longs, as we’ve described here today.