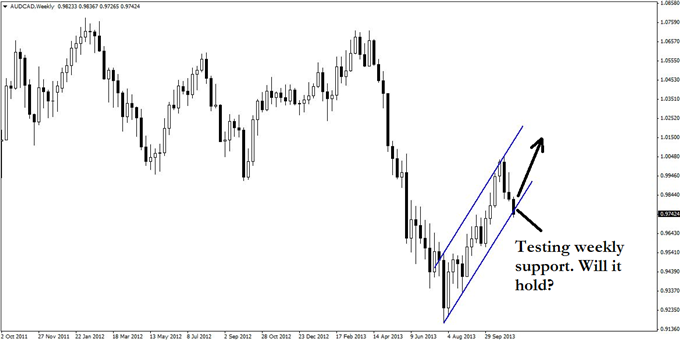 More than one technical trader’s attention will have been caught by the Australian dollar (AUD) this week. On AUDUSD and many other crosses, AUD is veering into clear levels of support. However, the trade is looking dangerous.

Although it’s valid on many levels, the sheer steadiness of the Aussie as it approaches support is unnerving. The currency has been single-minded for some time now, as reflected by our previous GBPAUD trade, which did not work despite a good level of resistance.

See previous: 2 GBP Trades That Validate Each Other

Currently, AUDCAD serves as an example of how this tricky situation could be dealt with.

The weekly chart is in a classic “bounce-or-break” situation. As always, no one really knows which direction will hold, but the bounce up that is shown on the chart has the better potential reward.

On the daily chart below, the rising trend line is also buffered with various levels of resistance turned support between 0.9749 and 0.9478. 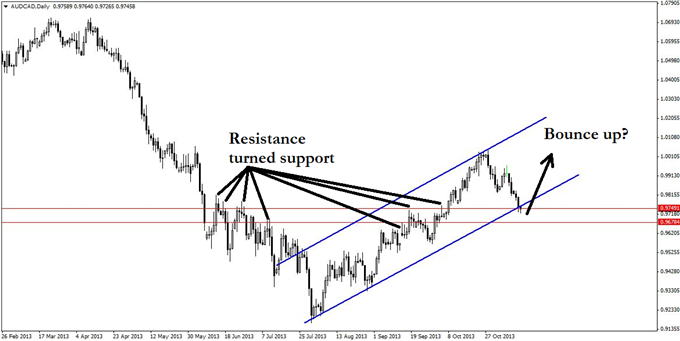 So far, so good…but here’s where it becomes tricky.

On the four-hour chart below, the latest move has been steady, and incredibly so. The absence of practically any significant squiggle to the upside suggests that the bulls are just not present yet, and that is plenty of cause for alarm. In practical terms, there could well be buyers just waiting for the support zone to be breached before charging the price upwards.

Guest Commentary: Big Cause for Concern in AUD/CAD 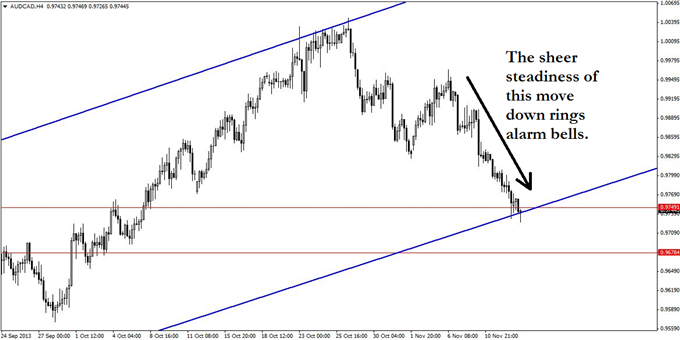 Indeed, at the time of writing, the four-hour chart was forming a bullish pin bar. However, if the analysis about the larger picture is wrong, price may not even give a hop or skip that would allow traders to move stop losses to breakeven and protect profits.

In fact, it could potentially just bulldoze forward as though nothing happened.

Of course, some traders could choose to take the risk, and that would be a valid choice. However, the lack of bull/bear interaction on the four-hour chart would suggest that a safer entry might be well advised.

The hourly chart suggests a better potential entry. There is a descending wedge pattern around the price motion that is terminating very soon. Estimates would mark the support zone as 0.9690-0.9715. This 25-pip zone will allow a precision entry on the 15-minute chart on the usual pin bar, bullish engulfing pattern, or bullish reversal divergence. 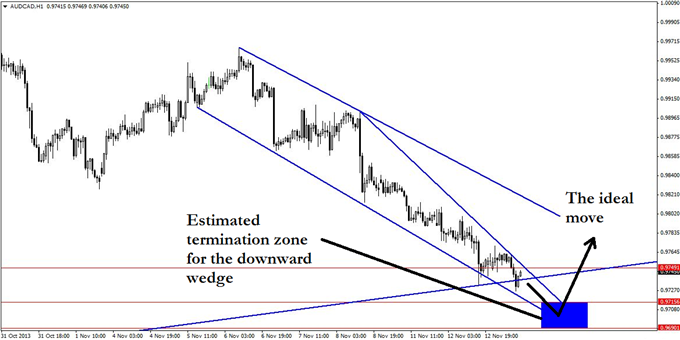 This would be a viable solution because it forces the support zone into a very small area using a valid chart pattern projection. This means that the entry will be focussed on a very small pattern on the 15-minute chart, and even a small bounce in price will enable the trader to protect the trade aggressively.

The downside of this approach is that it is assuming price will end either by completing this wedge pattern or by making a climax move to the downside into the support zone.

It does not matter if the wedge pattern is breached in the process; the support zone will still be valid because this scenario was accounted for. If price turns around prior to this support level, then aggressive traders who chose to risk standing in front of the steady downward price movement on the four-hour chart would profit.

That is certainly an acceptable way to trade for those with more aggressive risk appetites, but more conservative traders would be better off staying away from this set-up and moving on to the next one.