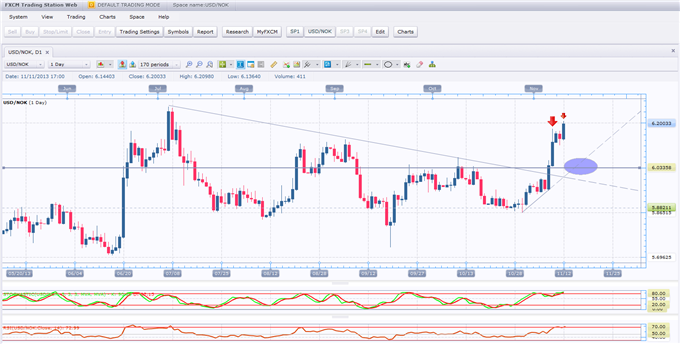 Too Much of a Good Thing for USD/NOK

So far, November has been a good month for the US dollar (USD) against most currency counterparts, including the Norwegian krone (NOK). The dollar and US economy have both been supported by stronger macro numbers, and as a result, the two USDNOK price targets we highlighted on October 29 (6.05 and 6.20) were reached in a hurry.

Now, having gone too far, too fast, USDNOK is overbought in the short term, as signaled by both the RSI and Stochastic indicators. This might favor some retracement or even a rough and sudden pullback in USDNOK in the coming days and/or weeks.

With that said, there’s always a train to catch when it comes to forex trading, and while USDNOK isn’t permanently out of play, traders must now exercise patience and find a better long-entry point that will offer more favorable risk/reward.

USDNOK broke earlier highs around 6.13/6.15, which caused the pair to spike above 6.20 with lightning speed. As indicated below, both the RSI (above 70) and Stochastic (above 80) suggest that the pair has become overbought in the short term.

Furthermore, this most recent move started from the lower 5.90’s without any pause and without forming a base for greater support on the way back. In that respect, we should be especially careful in upcoming days and/or weeks until both the RSI and Stochastic can return to normal levels in preparation for another possible leg up.

On the upside, we have established resistance at a yearly high around 6.25. If we manage to break and establish above this area, the next possible resistance is around 6.30 and then all the way to 6.50.

On the downside, we should find support around 6.15/6.13 and then again at 6.07, although it wouldn’t be a surprise if we went on to re-test the breakout area around 6.00 (former trend line).

In the long term, USDNOK has put in higher lows and higher highs, which favors a positive move in due time. In the short term, however, the current move seems a bit overstretched, but after a healthy retracement, we may well find a better long-entry point and more favorable risk/reward.

See also: A USD/NOK Move That’s Been Months in the Making

Given the weaker Norwegian krone over the last couple months, we may see a boost in Norway’s export industry. Another effect could also be a higher consumer price index (CPI).

In the US, it remains to be seen whether the recent government shutdown will have a harsh negative impact on economic data. Even if so, that’s likely to be a short-term drag, but it could be just the catalyst USDNOK would need to pull back and present another reasonable long-entry opportunity.

The long-term bullish case for USDNOK remains intact, but short term, a consolidation or even a harsh, sudden pullback is possible, so patience is a virtue for the time being.

Be on the lookout for a healthy retracement to possible support levels such as 6.07 or 6.00, areas where more favorable risk/reward opportunities could be available for new long positions.

Again, there’s always a train to catch in the FX market, but we all want to travel in first-class with minimal hassle and little downside risk.