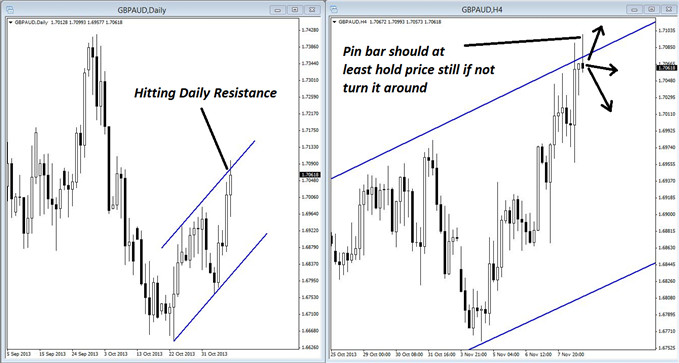 2 GBP Trades That Validate Each Other

One of the more common mantras many traders hear early in their education is to look for "favorable points of confluence" or "multiple reasons to enter a trade." Usually, this refers to finding multiple trade signals lining up in the same direction for the same instrument.

However, one situation that receives less emphasis, but can be of tremendous significance, is when two or more related instruments give signals in the same direction. That is happening this week for the British pound (GBP).

The daily chart for GBPAUD (see left panel below) speaks for itself, as price is hitting the top of a resistance channel. This level is holding so far, as shown by the pin bar on the four-hour chart in the right-hand panel.

As always, there are only three ways price can go: up, down, or sideways. The resistance level and the pin taken together suggest that price should at least go sideways, if not turn around for a pullback. Of course, there is always a possibility of price rising, but given the evidence, this seems less likely.

Nonetheless, this set-up would seem a little dubious given that there are only two reasons to take this trade. 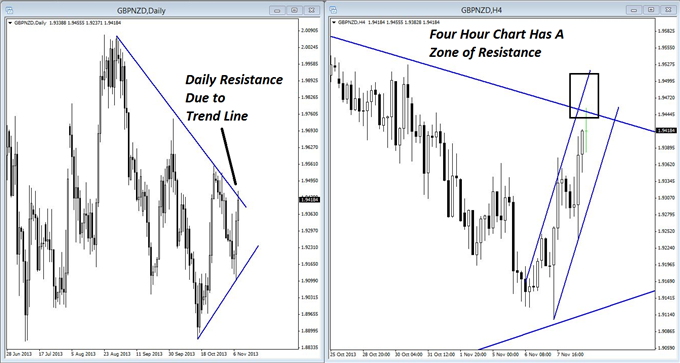 Admittedly, the confluence of resistance of the daily trend line and the four-hour rising channel gives some leeway in the form of a resistance zone overhead. Nonetheless, bulls would have to work hard to break this level. 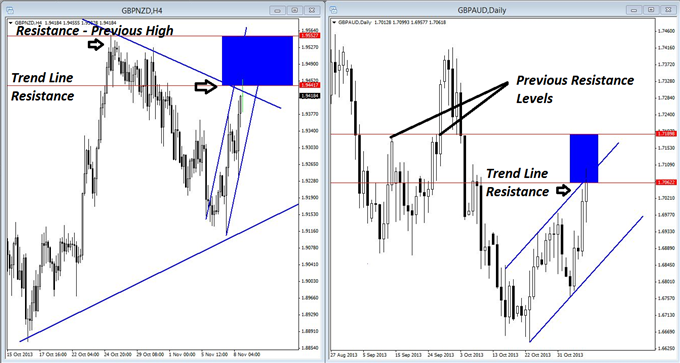 First, it’s vital to determine on which time frame(s) to take these trades, and since GBPAUD is showing more signs of reversal with the pin bar on the four-hour chart, it can be taken on that time frame. A break below the low of the pin would be a reasonable place to enter a short position.

On the other hand, although the long-legged doji on the GBPNZD four-hour chart may be enticing, it is far from decisive. Thus, a more precise entry on the hourly charts would be preferable. Some form of reversal divergence or even more decisive candlestick action (pin bars, bearish engulfing candlesticks, etc.) on the hourly time frame would be reasonable triggers.

At this point, another serious consideration is presented: Can both of these trades be taken simultaneously?

Technically, both set-ups are reasonable. However, to enter both shorts would be, in essence, double the short-side exposure to GBP, which is not especially wise.

As a result, traders have three options:

All three would be valid responses. Both of these trades are valid on their own, and together, they do reinforce one another. Nonetheless, it is also worth remembering that there are plenty of GBP pairs out there, so a confluence such as this is extremely reassuring, even though in trading, nothing is ever a sure bet.