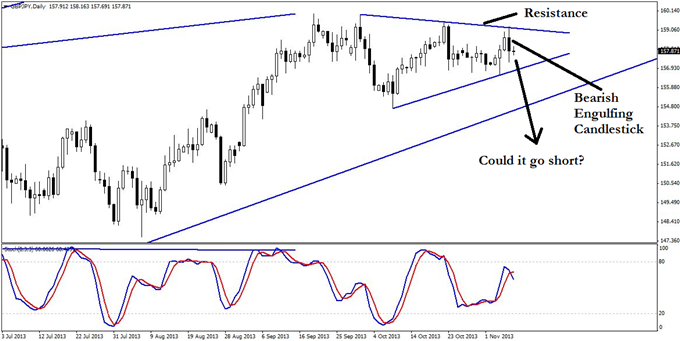 GBPJPY has quite a reputation in the industry for eating unwary traders alive, and it may be at it again. The daily chart has presented a seemingly valid countertrend short opportunity, as shown below.

Quite a few factors are present here that could prompt traders to short the market, including:

And, on the weekly chart below, there is a classic bearish reversal divergence, which happens to be one of the signals that helped validate our NZDJPY trade from earlier this week.

See related: A NZD/JPY Set-up That’s the Best of the Bunch 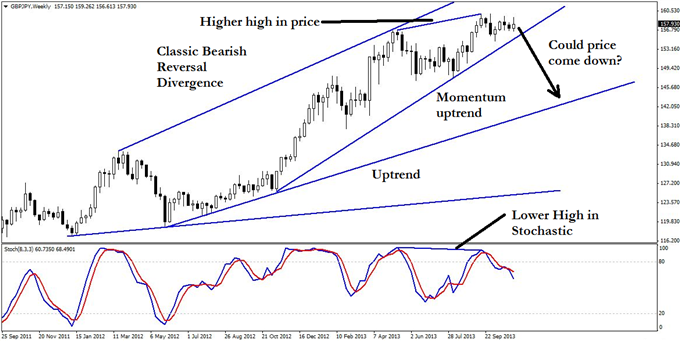 So why hesitate to take this trade?

The first and most obvious argument would be that it is countertrend in nature, which is clearly visible on the weekly chart. Now, some traders may argue that the reversal divergence pattern is a case for going short, and that is true, but the effect of Stochastic divergence is typically good for only, say, five to eight bars.

It could well give one more swipe to the downside, but the shallow, sideways motion is a signal that must be respected. If bears cannot push price down even with the help of divergence, then there is a good chance that the bulls might come in with a surprise move up.

Even on the daily chart, pattern traders will recognize the triangle consolidation pattern, which, although symmetrical, is biased to the upside due to the major upward move that preceded it.

The second argument against the GBPJPY short trade is that there are rising trend lines on the daily chart which are very close to the bearish engulfing formation. Even if the trade triggered and managed to push through one or two of them, it would be fighting nearly all the way. In short, there is just not much room to move.

So, despite what on the surface seems like a viable short set-up, the better bet is to trade with the trend, as is always the case. While trends break all the time, the probability of a trend trade being profitable is much better.

It’s not to say that the bearish engulfing pattern set-up won’t work, because it most certainly could, but under the circumstances, a long position would be much more preferable, and there just so happens to be one setting up!

To identify an optimal buy zone for GBPJPY, we move down and look at price action on the four-hour chart, where a zone of support has been estimated near the rising support trend line on the daily triangle pattern occurring between 156.08 and 156.83.

The exact zone, particularly the higher value, is supported by previous bounces in that location, and is easily visible when looking at the red, horizontal level on the chart. 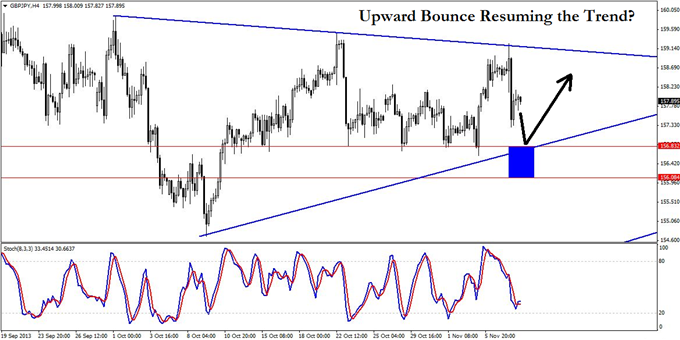 Due to the downward momentum move from yesterday (Nov. 7), a little more leeway has been given than usual. Hence, the support zone has approximately 80 pips, which is just slightly smaller than the pair’s current daily average true range (ATR) of 90 pips.

The ideal trade would be for price to head downwards, giving some kind of reversal pattern on the hourly chart, which could include a pin bar, a bullish engulfing pattern, or a bullish reversal divergence.

Given that this is a sideways price-motion chart on the daily, a lot of choppiness is to be expected within the triangle. That actually works in the favor of the long trade since it is possible to bank quite a few pips before price will even have to contend with upside resistance.

The GBPJPY’s notorious tendency to snap back and forth is a definite plus should this trade develop, as it could well turn profitable quickly. That’s assuming, of course, that it does not decide to take a bite at the stop loss first, but given the overall set-up, this is a calculated risk that’s worth taking.