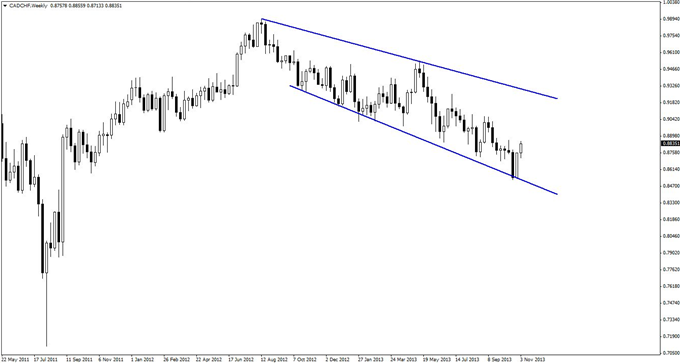 This week’s surprise rate cut by the European Central Bank (ECB) has sent currencies running in various directions. In spite of this, the movement has actually cleared the decks a little, breaking various stalemates between bulls and bears. CADCHF is one such example.

The downtrend on the weekly chart (see below) is clear, and prices are now pulling back in a countertrend movement that traders can use in hopes of getting another move down.

The daily chart below provides a picture of definite interest. Price is now heading up to the test the resistance zone formed by two trend lines. The initial question, however, is which trend line should be seen as the dominant one? 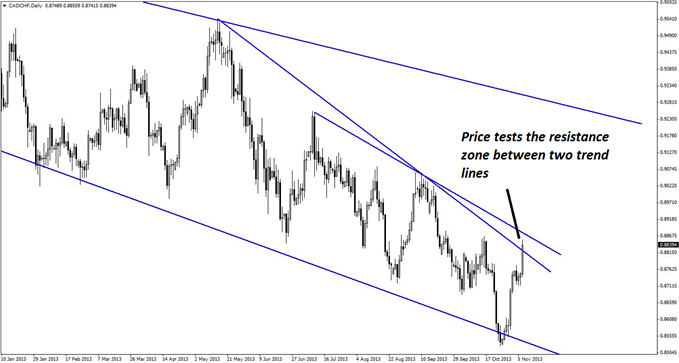 Different traders will favor different ones, and there’s plenty of variety not shown above. The essential point, however, is that the two trend lines taken together identify a range of resistance that could kick in to limit the upward thrust in CADCHF.

The four-hour chart below provides an even better look at the key zone of resistance, and an estimate of those trend lines plus an upside buffer due to the speed of the news-powered movement makes the key zone of interest 0.8834-0.8929. 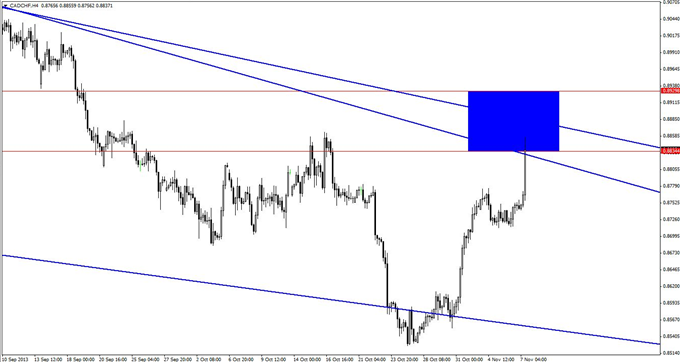 Whether or not this zone will hold ultimately remains to be seen, but what is really needed is a reliable reversal pattern on the CADCHF hourly chart.

As seen below, the hourly chart has (at the time of writing) already begun to test resistance. As the markets are adjusting to a news shock, a reliable trigger will be needed, the most likely of which would be a pin bar (or bearish engulfing candlestick, which is less likely). Should this occur, price will likely hesitate and wind sideways. 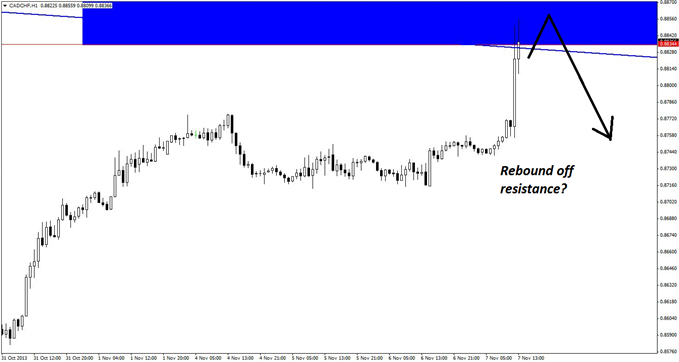 This would signal an entry only for bold or very skilled traders. It’s tradable, but requires nimble exit work should it start to fail.

More conservative traders would be advised to skip that signal and wait for price to climb a little higher, even if it takes a few more hourly bars. At that point, it should form a slower and more pronounced reversal pattern, probably one that’s even supported by reversal divergence. That would be the safer trade.

Even then, CADCHF may not do much more than idle sideways, but this would afford plenty of time to get out, unlike the earlier scenario. Of course, the hope is that there is a strong reaction off the overhead resistance zone, which would result in an early short entry on a downside trend trade.