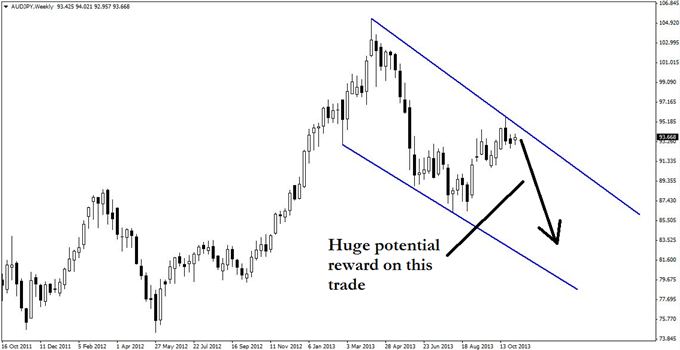 As we wait for our previous trade on AUDCHF to set up and trigger, a close relative of the same set-up has appeared on the chart for AUDJPY. As neither trade has triggered yet, it is worth keeping an eye on this one as well, especially if AUDCHF does not reach the entry level we identified.

See also: An AUD/CHF Set-up That Most Traders Dream About

In the case of AUDJPY, the potential reward on the weekly chart speaks for itself. Traders who catch that move early—should it develop—would stand to bank hundreds of pips. That being said, it pays to balance aspirations with careful analysis.

The daily chart is showing another classic pattern whereby the rising trend line has just been broken and price is heading up to test it. With this type of motion, this trade is potentially even more attractive than AUDCHF, as it does not have the large momentum move to overcome. 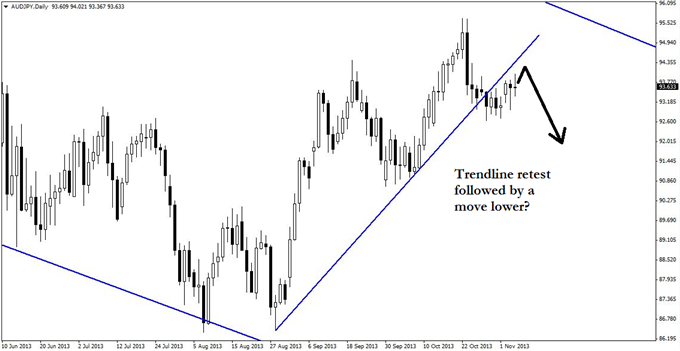 The upward retest move has, so far, been tentative, suggesting that bears have an above-average chance of winning this tussle. Overall, the case for this trade is strong, and all that remains is to identify a calculated entry strategy.

For that, we’ll look to the four-hour chart (see below), which provides plenty of resistance. Three levels that are in confluence with the broken trend line on the daily chart have been chosen, thus providing a resistance zone of 94.10-94.59. 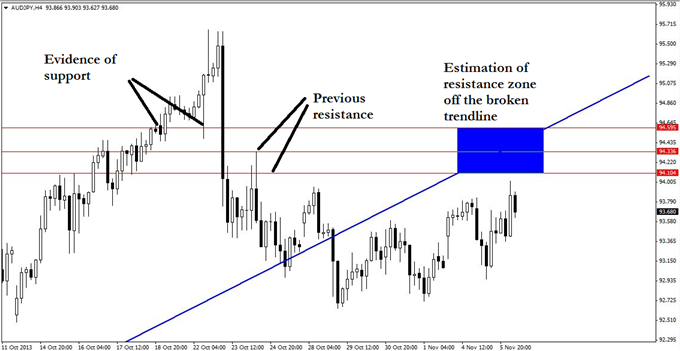 It is even more encouraging to note the steady cyclical movement as price winds its way up to meet the identified level. This indicates healthy give and take between buyers and sellers, suggesting that even if the trade does not work out, there will at least be room to reduce risk by scaling out, moving stop losses, and, should price feedback become hostile, to exit for a smaller gain or loss.

One possible trigger for this trade would be the end of a sudden, explosive upward thrust, culminating in a pin bar or bearish engulfing formation on the hourly chart. A second trigger would be a reversal divergence on the hourly chart as price slows down before rolling over.

The risk on this trade is surprisingly minimal, but of course, it is still present. The danger comes if price bulldozes through the identified resistance zone and ignores the trend line altogether. This is possible, but given the evidence, it’s rather unlikely, and that small risk profile and huge potential reward makes this a very interesting trade indeed.