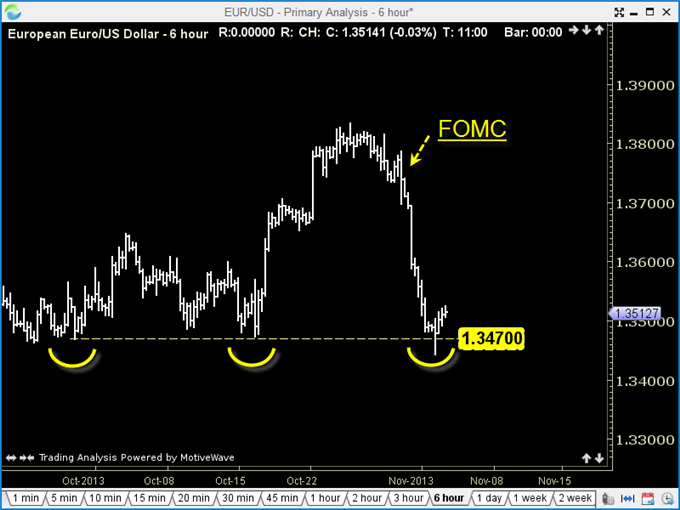 The Triple-Bottom Trap and How to Dodge it

Last week’s Federal Open Market Committee (FOMC) meeting caught many currency traders on the wrong side of the US dollar (USD) trade, and it cost them dearly! With the Fed’s exclusion of a small phrase pertaining to tightening fiscal conditions, the markets quickly priced in a reduction of bond purchases at the December FOMC meeting, and the dollar soared in response. However, those who didn’t have a EURUSD short at work prior to the announcement had a tough time finding a safe entry.

The six-hour EURUSD chart (see below) plummeted towards the 1.3470 double bottom that was formed in October, thus setting up a possible triple bottom. In my experience, triple bottoms rarely hold and reverse the market. More times than not, triple bottoms wind up failing and breaking to new lows, but here’s the trick: Never trade the first test of a triple bottom. Instead, wait for a completed Elliott wave corrective rally to position a trade for the attack—and ultimate defeat—of the triple bottom.

Moving back to the EURUSD example, the FOMC meeting (yellow label) dropped the pair quite sharply in a third wave (green labels) of a five-wave Elliott trend. Just as we would expect, the initial test of the 1.3470 triple bottom held support and put in a short-term bounce, which we can identify as a fourth-wave correction of a five-wave Elliott trend.

If we can time it right, we can use Fibonacci to pinpoint the zone where this bounce from doomed support will terminate, thus setting up a wave-five slide to new lows. 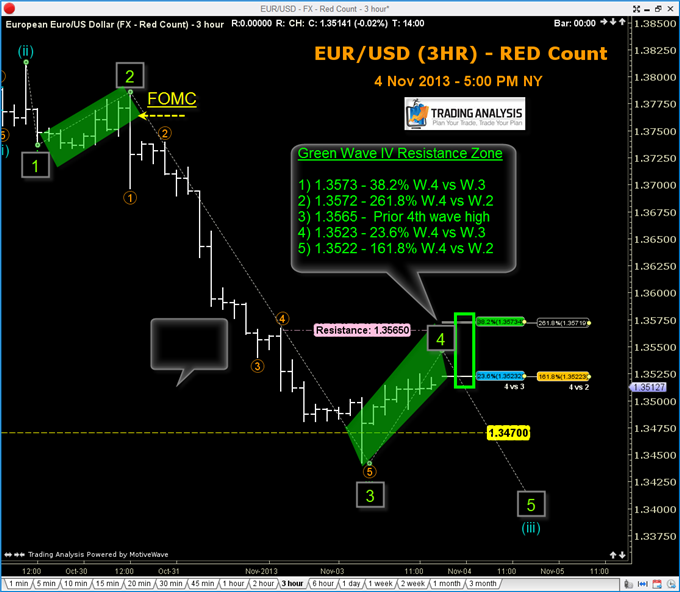 At this point, I’m going to get into some of the finer points of Elliott wave to set up the trade. In future articles, we will dig deeper and study how to do this for yourself. To begin, we need to construct FRZs, or Fibonacci Resistance Zones, which should capture the end of the green wave four (W4).

How to Properly Trade This Triple Bottom

Traders who are not armed with the tools to correctly trade for the break of the key 1.3470 level are being stopped out right now. They tried their best to align themselves with the trend and went short EURUSD a few days too early, only to watch the pair climb back above 1.3470 on this bounce. As their stop losses are being triggered, we are setting our sell limits to move into short positions.

By Todd Gordon of TradingAnalysis.com