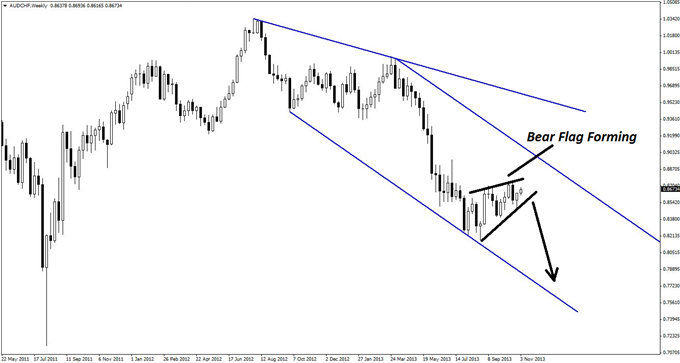 An AUD/CHF Set-up That Most Traders Dream About

In spite of the heightened uncertainty, the market has been generous so far. A recent NZDJPY trade delivered immediately, and even our GBPNZD set-up eventually obliged after a reduced loss on the first attempt. Nonetheless, the large momentum moves from last week continue to cloud the outlook for both bulls and bears alike.

Today, the main pairs of interest include the Swiss franc (CHF), with which we will pair the Australian dollar (AUD) because it allows for a more conservative and potentially safer entry. The trade-offs for that additional safety come in two forms, however: 1) The set-up may not materialize; and 2) Even if it does, it may take a while to work.

Nonetheless, preserving capital sits atop the agenda in adverse market conditions, and as a result, it pays to be picky when selecting trades. The biggest attraction about AUDCHF is the clear downtrend that has formed on the weekly chart below.

Chart pattern enthusiasts will recognize the current formation as a classic bear flag with a very long flag pole. Thus, should we be able to catch the end of the flag just before it breaks, it could potentially develop into a wild ride down, which would be a dream scenario for most every trader. That potential alone is reason enough to favor AUDCHF over the others.

The pattern that we hope will develop is shown on the daily chart below. Price has risen for five candles now, although admittedly, one of those is a Sunday candle. Regardless, it seems reasonable to locate an entry level at the end of this upward movement. 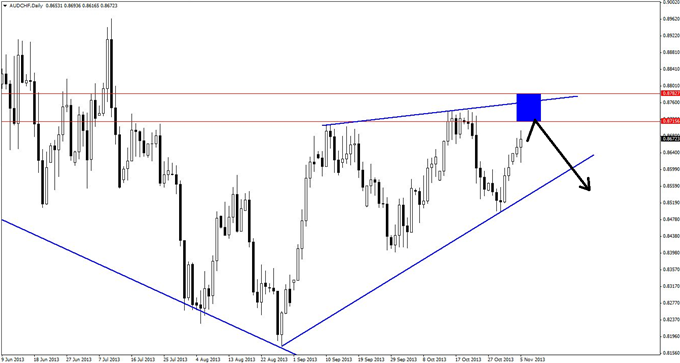 Fighting momentum like this head on is never a good idea, so resistance is borrowed from the top of the wedge. Due to the heavy momentum, a somewhat larger estimate of resistance is called for. In this case, the resistance zone is 0.8715-0.8782, which is the approximate size of the daily average true range (ATR), or 67 pips.

In practice, some slowing of momentum on the four-hour chart prior to hitting the resistance zone would be ideal. However, the trade would be valid regardless of whether or not price got there.

Guest Commentary: An Ideal Momentum Signal to Watch for 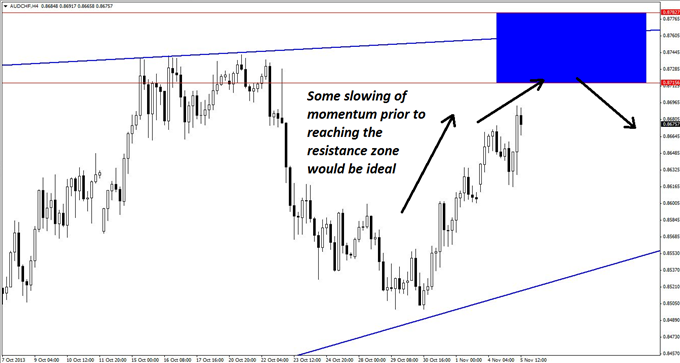 The trigger for this trade would be derived from some kind of reversal pattern on the hourly chart, which usually (but not always) would be a reversal divergence. If the slowing of momentum indicated in the above scenario develops, then the trade can be taken with greater confidence.

In any case, it is still best to divide the trade into longer- and shorter-term components so as to make defensive trading possible. The short-term trade can be removed at the first sign of trouble in order to reduce risk on the trade, leaving the longer-term position in place to catch a large move, should one develop.