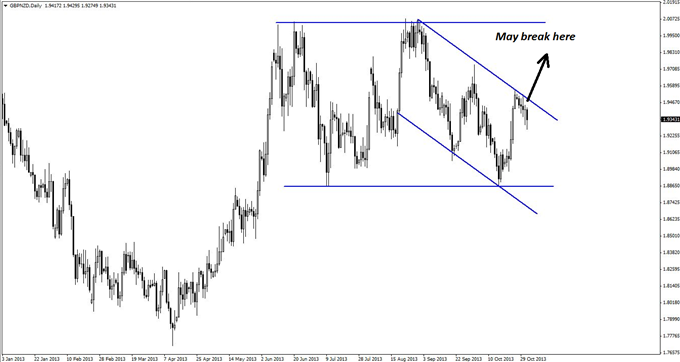 With markets running at full tilt, finding good trades can be tricky. For the most part, it is wiser to be more wary of initiating longer-time-frame trades at this point, as most instruments are either far from their turning points, or are charging towards them with too much momentum for comfort. One possible exception to this condition is GBPNZD, which may soon present a trading opportunity on the hourly charts.

As shown below, the daily chart is in a downtrend, although it is far from clear. That downward channel is contained by a larger sideways pattern. Thus, both longs and shorts may be viable.

At this point, the clue that gives us hope of a larger move is that prices have not been significantly pushed down by the top of the declining channel. This shallow move may develop into a larger move up towards the horizontal resistance, as marked.

However, at this point, a long would be (relatively mildly) counter to the daily trend, and a higher level of precision is desirable.

The four-hour chart below presents a unique intersection of a declining channel and a rising trend line, which allows an estimated zone of resistance in the area of the 1.9148-1.9249. This will be the battleground upon which the next major price movement will likely be decided. 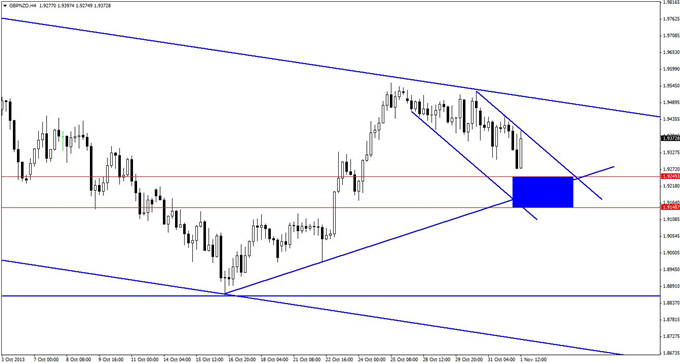 However, as previously noted, the daily momentum is slightly down. Thus, traders who choose to go long in this zone would be well-advised to divide their trades into two portions, one short-term and one long-term position.

A few questions are likely to arise regarding this trade scenario, and the first would be whether it matters if the declining channel on the four-hour chart was broken before the support zone was tested. As the support is largely estimated from the rising trend line, the answer would be "no." This set-up would be viable regardless of whether the channel remained intact.

The next question would be regarding a logical entry strategy, and for help with this, we turn to the hourly chart. As seen below, there is clear evidence that there are buyers in this market, even though the sellers are stronger. This can be seen by the cyclic, or wavy, movement of price towards the support zone. 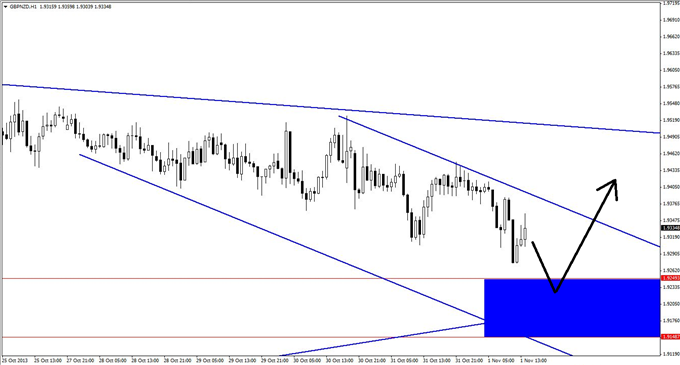 The fact that the rallies, although producing lower highs, are actually quite large, is very encouraging. In fact, one of the most attractive points about this trade is the fact that it presents a high-probability scalp scenario where a trader could grab some quick profits in the short term (which would turn the overall trade to breakeven quickly) and then hang on to see if a larger move develops for the longer-term position.

Thus, the ideal entry signal would be some type of bullish reversal divergence once the pair reaches the highlighted range on the hourly chart.