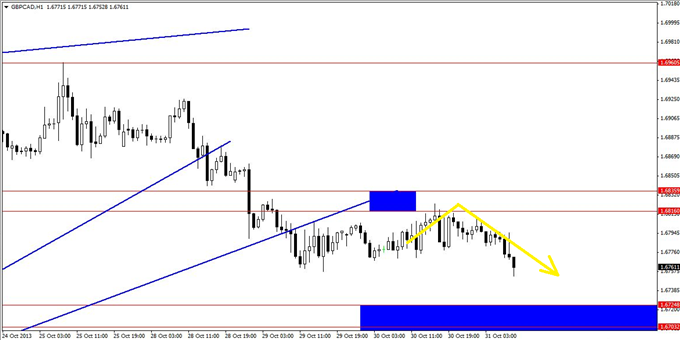 GBPCAD has been most cooperative recently. It presented a short opportunity on the daily chart a week ago, one that was taken with some caution due to some mitigating factors. However, the pair proved itself by running short, and just yesterday (Oct. 30), GBPCAD provided another intraday opportunity.

Guest Commentary: The “Textbook” GBP/CAD Pattern from a Week Ago

The chart above shows the hourly move that was previously projected. Price hit the zone of resistance, and the entry signal was given by the well-formed pin bar that marked the top of the 15-minute trend.

Now, with price apparently headed to the targeted support levels, traders would be well-advised to lock in some profits and trail their stop losses. Of course, the swing would ideally terminate at the support zone identified initially between 1.6614-1.6724. This would be the right area to begin defensive trade management and profit taking.

The reason this zone is of particular interest is because this is also the area where a potential long entry could develop. Readers will recall that the original support zone was somewhat smaller, and it was widened in order to create a conservative targeting area for the trade now playing out.

The inverse would be true for traders looking to enter at this level. Thus, the current 110-pip zone has been decreased by ten pips on either side in order to zoom in on a more precise entry in the 1.6624-1.6714 range. In short, this is the area inside the blue box on the chart below.

Guest Commentary: A GBP/CAD Reversal in the Making 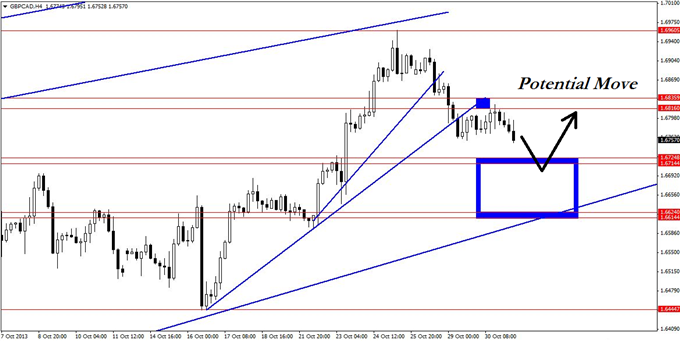 Given how determined price has been to push downwards, we would wish to see some kind of slowing of price movement, as evidenced by reversal divergence on the hourly charts, when the price gets there. This could well develop into a mini or full-blown swing trade lasting two days or more, if successful.

The higher-time-frame case for a long at this point is classic: a pullback to support in an uptrend on the daily chart (see below). 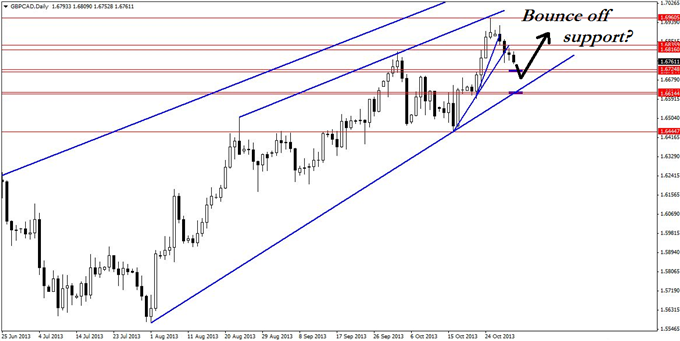 As always, nothing in trading is guaranteed, and price may not reach the support zone before bouncing off, in which case the short trade would be stopped out, but only at a significant profit considering the initial trade has already moved more than 60 pips with an original stop size of approximately 12 pips. Even if it does reach the zone, it may take two or three tries to hop on to any subsequent rise.

Given the decisive nature of this move down, however, we would ideally want to see some evidence of price struggling between bulls and bears prior to getting the reversal divergence. With some luck, GBPCAD will continue to behave so cooperatively.