GBP/CAD: 60 More Pips That Are Tougher to Tackle

The downward GBPCAD move discussed earlier this week is moving along quite well so far in spite of the reasons for caution we highlighted initially.

See original: A “Textbook” GBP/CAD Pattern with a Hidden Twist

As seen in the chart below, the current profit level on that trade would now be approximately equal to the risk taken.

It is the speed of the move down that is eye-catching, however, particularly because price has already broken the rising trend line support levels.

Consolidating where it is now suggests that although some upward pullback is likely, there should be at least one more push down.

Guest Commentary: Another Push Down for GBP/CAD 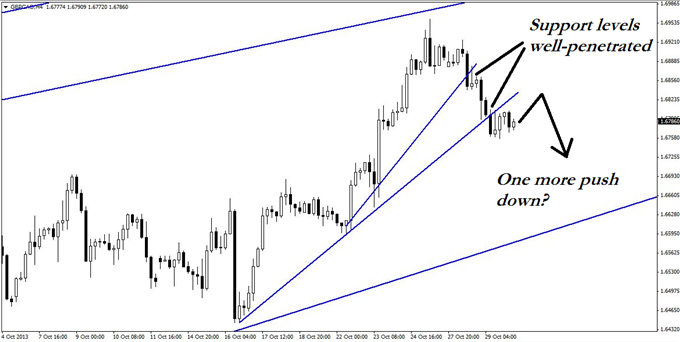 Due to the risk factors cited earlier for that trade, however, caution is still a top priority, and as a result, only an intraday trade should be attempted at this point.

In that regard, there are two conflicting Elliott wave counts on the four-hour and hourly charts that could be of particular interest. 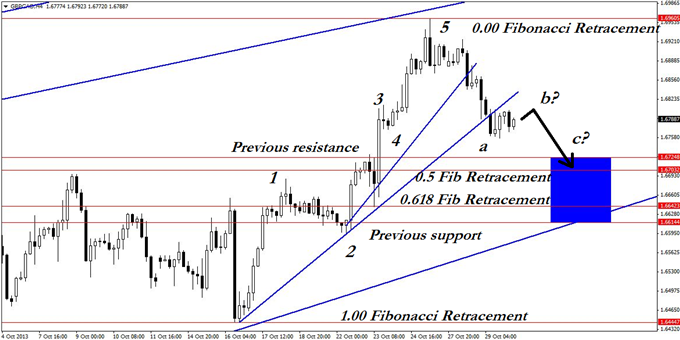 The four-hour Elliott wave count has been identified in the above chart for enthusiasts only. For those who wish to understand the bottom line, the hypothetical projected move is the jagged black arrow labelled with “b” and “c.”

The key point here is that according to Elliott wave projections, price could potentially move down to find support between the 50% and 61.8% Fibonacci retracement levels at 1.6642 and 1.6703. To be conservative, this zone has been slightly enlarged to 1.6614-1.6724 in order to account for previous price-based support and resistance.

Essentially, the analysis suggests that there could be at least 60 pips of additional downside to this move. The important question, however, is how to capture that potential move? 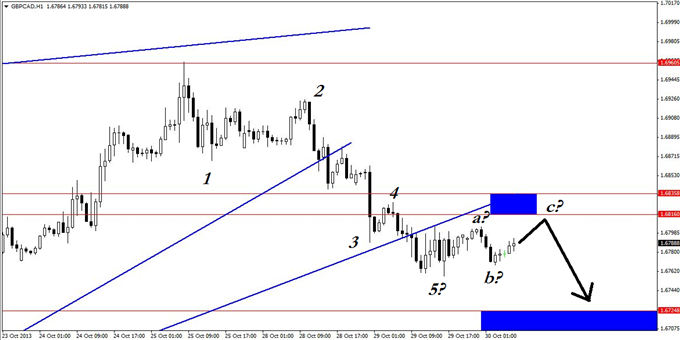 The wave count on the GBPCAD hourly chart is far less certain, as wave 5 may not represent the low. Nonetheless, on pure support and resistance principles, we have an estimated resistance zone around the wave 4 high in the area of 1.6816-1.6835.

This is extremely small in relation to the move that could develop. Although price could run straight down without going up to test that level of resistance, the move is a little doubtful on the daily chart, so a more defensive stance is preferable here, even if it means missing the potential move.

Alternatively, price could go down to make a new low (new wave 5) before pulling back up to this resistance, and that scenario would be tradable as well. Since this zone is anchored around previous price action, the resistance zone would still be valid. Of course, if price moves straight to the projected support zone, then the opportunity would be negated.

This is essentially an intraday trading opportunity using a 15-minute chart where an early entry and nimble trade management would be required. As usual, pin bars, engulfing bars, reversal patterns, and divergence would all be potential reasons to enter when price pierces that key resistance zone.