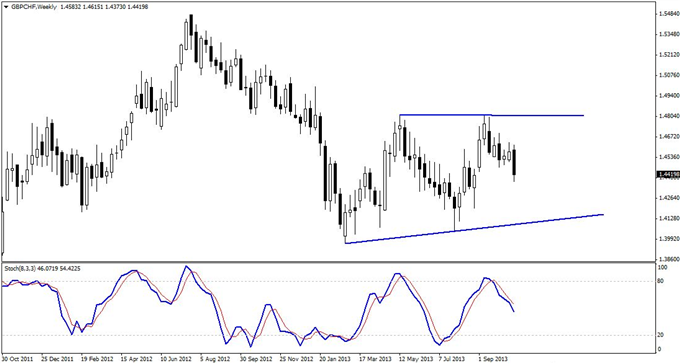 A Tradable "3-Push" Set-up in GBP/CHF

GBPCHF is currently in a mostly sideways area on the weekly chart, resting after a downward move. The big picture momentum is down, but this is not an area where large movements are expected.

The pair is in the midst of a downward swing, as indicated by the stochastic crossing down, or indeed a direct examination of the price action. Nonetheless, there is an interesting situation that has formed on the daily chart that makes a long position potentially desirable.

Traders will note the relatively rare “three-push” pattern on the GBPCHF daily chart. It consists of three equal pushes down within a fairly consistent channel. The second-to-last bar has a longish tail, which is a potential indication that the current downswing is nearly over. The Stochastic is still crossed down, but there may well be an entry long. 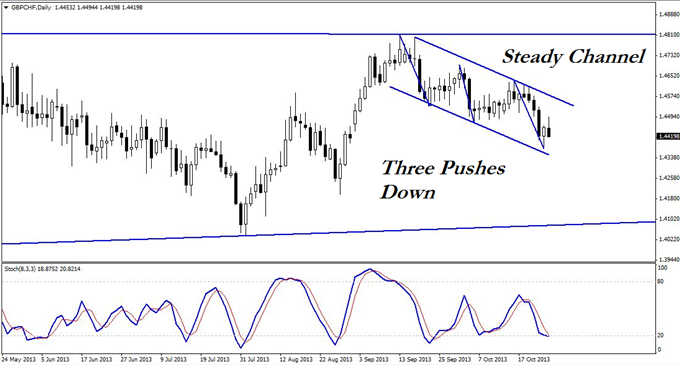 The three-push pattern is an end-of-trend pattern, and if it truly develops, it would point to price going up well above the top of the channel (see below). That would be ideal indeed! 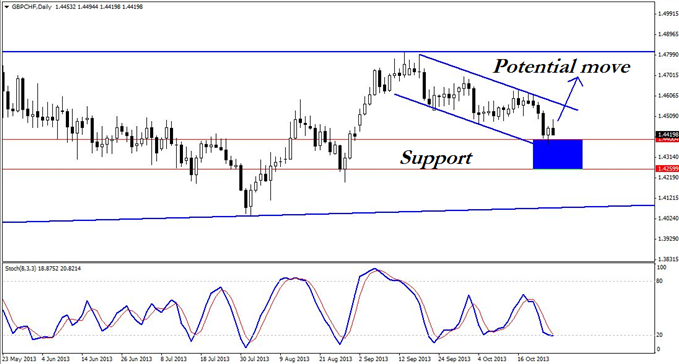 To account for the fact that the weekly chart is still in a general downtrend, and also for the fact that a three-push pattern by its very nature defies the current trend, a support zone approximately half the size of the downward channel has been estimated.

Further, this zone has been adjusted to match previous price action, in particular, the late-August low. That zone is 1.4259-1.4400. It is a fairly large area, but there are two reasons why it is viable: 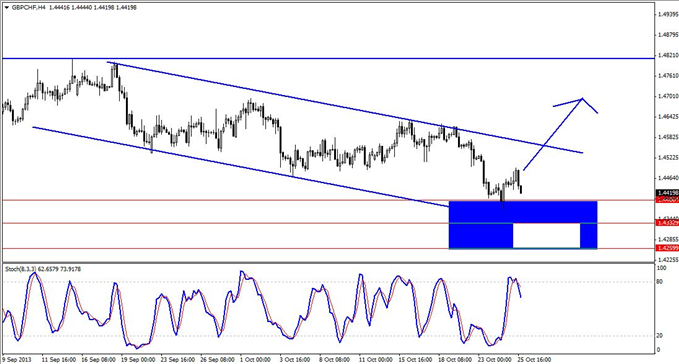 On the four-hour chart, price still looks to be under pressure from a bearish flag pattern, so it may well be that the lower half of the zone will be challenged, and that would reduce the zone by approximately half, leaving the target area confined between 1.4529 and 1.4332.

This is the zone worth watching for signs of reversal divergence or some other bullish pattern on the four-hour charts for the coming week. Other patterns such as the inverse head-and-shoulders may also be tradable on the hourly chart. However, it is worth noting that the level of support is likely to prove flexible, and price may spike below it.

In the event that price closes below the range on the four-hour chart, however, it would be considered a break of the zone, rendering this set-up effectively null and void.