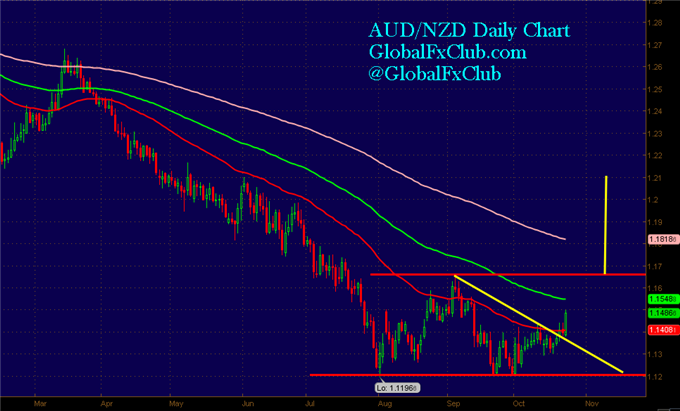 The New Case for a (Big) AUD/NZD Rally

AUDNZD is odd in that it pits two commodity currencies against one another, and as a result, the pair is mostly driven by interest rate differentials between Australia and New Zealand. The pair has been in a significant downtrend since 2011, but that downtrend has accelerated since March 2013, when the Reserve Bank of New Zealand (RBNZ) became steadily more hawkish while the Reserve Bank of Australia (RBA) remained dovish.

There are now reasons to believe, however, that this downtrend may be over…at least for the time being.

First, the RBA has shifted its stance from openly dovish to a more neutral, “wait-and-see” approach over the past few months. Growing concerns about a housing bubble in Australia (matched by those same concerns in New Zealand) combined with record low interest rates has pushed the RBA into a position where it will have to seriously consider the broader consequences of further rate cuts.

These concerns were well reflected in some key Australian data released last night. Australian quarterly CPI figures came in higher than expected, printing at 1.2% versus 0.8% expected and 0.4% prior, which marked a significant jump in inflationary pressures from July. This data, combined with an increasingly neutral (if not-yet-hawkish) RBA, may serve to boost interest rate expectations in Australia.

On the other side of things is the RBNZ’s concern about the elevated value of the New Zealand dollar (NZD), something that Finance Minister Bill English echoed in his latest comments.

Aggressive tightening by the RBNZ would lead to a dramatically stronger NZD, which could do significant damage to the country’s export sector. These fears may force the RBNZ to delay its plans to raise interest rates, a view that was seconded by Australian bank Westpac last night when it predicted the RBNZ won’t hike rates until at least April 2014.

In the aftermath of the forecast, the New Zealand dollar weakened notably, which provided a very nice technical set-up in the AUDNZD pair.

Triple Bottom Is in for AUD/NZD

AUDNZD appears to have put in a triple bottom near 1.12, rallying strongly off that level earlier this month. The pair has broken above descending trend-line resistance and is set to put in a very strong bullish candle today.

The pair could retrace some its gains today if we see strong New Zealand exports contained in the latest trade balance figures, but nonetheless, the AUDNZD chart is beginning to look increasingly bullish.