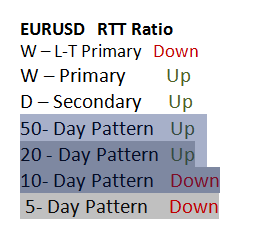 Traders can—and should—look to take advantage of trade signals on multiple time frames, as shown in this EURUSD example, where conflicting signals on different time frames both yielded profitable set-ups.

A trading method, like any tool used for measuring, is great because it identifies a market shift despite the duality of our opinion and position. Many of us do not like change, nor have we fully learned to appreciate the freedom of objectivity in trading, but unless profitability is not a concern, then the need to adapt in response to a change in the market environment is inevitable.

Over the course of the last few years, we have seen how previously elongated trends in the currency markets have been replaced by two-way or counter-trending moves. This has caused many to migrate down to lower-time-frame charts and focus on a different set of patterns.

Several years ago, our benchmark method at Trading Universityfocused on primary, secondary, and 50-day patterns to make trading decisions. We’ve now dropped all the way down to 50-, 20-, and ten-day patterns to look for trades. And, just as we adjusted downward, the time may come again when we may need to shift back out to those higher-time-frame charts. The tool we use for making that determination is our Risk Tolerance Threshold (RTT) Ratio.

The RTT Ratio is how we categorize the different trends in an individual market to determine which market to trade, and which direction to trade it. It also helps remove opinions from the trading equation.

First, we calculate an individual pattern as being bullish or bearish based on proprietary techniques and using a tenet of Dow Theory. We then collate the patterns in a ratio for easy viewing and focus on the three successive patterns appropriate for the time fame we trade.

For example, if daytrading a five-minute chart, I will focus on the three lowest-time-frame patterns, the five-, ten-, and 20-day patterns. If I’m swing trading a four-hour chart, I may focus on the 20-, 50-, and secondary patterns. Of the three patterns we look at, we take the majority direction as the collective direction.

In the ratio below, we have marked the two different patterns with overlapping shades.

Here is where some traders get confused, however. They want to know which patterns to key off of: the five through the 20, or the ten through the 50? Well, the answer is “both,” and that can be understandably confusing because it often requires a different way of thinking.

It is human nature to want to take one side or the other, but in trading, that kind of thinking can be a handicap. A trader needs the freedom to take one or both sides of a trade.

Having no bias as to which direction to trade might mean a change in the way you think, but the chart below will help show why it’s worth it. 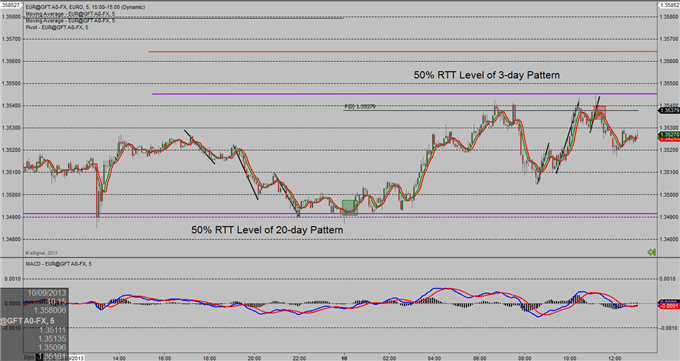 On the intraday EURUSD chart above, we see support holding ahead of London and resistance holding in the US session. If daytrading, we would be focusing on the ten- through 50-day patterns, for which the collective pattern was bullish.

One way to trade the bullish pattern would be to look for double tops or double bottoms on 50% retracement levels, and we have exactly such a buy set-up just before the London session at approximately 1.3490 on a longer-term retracement. The actual buy signal would be a short-term trend line break coupled with a bullish shift in momentum.

Then, later that day during the US session, we get a double-top sell set-up at a shorter-term 50% retracement. Because we have the freedom to trade the five- through 20-day patterns, we are not restricted to just buy signals on this day.

The advantage of using a scalable, fractal-based yardstick such as the RTT Ratio is that it allows for trading regardless of the number of short- or even longer-term market shifts. It also removes the pressure of having to determine which market and which direction to trade, therefore allowing the trader to be more relaxed and focused on following proper trade management.

Undoubtedly, those who are not profitable in their trading must consider the need to make a change, and that change likely needs to originate with the way they think.