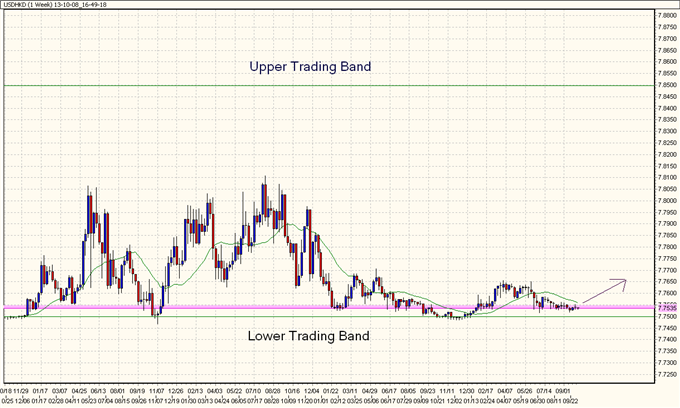 The Hong Kong dollar (HKD) trades in a sternly protected range against the US dollar (USD), and while the pair is off the radar for most traders, near- and long-term profit potential does exist.

An interesting feature about the Hong Kong dollar (HKD) is that in spite of being the world’s eighth-most-traded currency, it’s not especially tradable, and consequently, it is off the radar of most speculators.

In 2011, one of Bill Ackman’s “juicy” trades was built around the premise that the HKD would be de-linked from the US dollar (USD) by 2015, and would appreciate as a result. I believe this scenario is unlikely to happen, although I do believe that the HKD can deliver excellent profits at opportune moments for select, alert investors.

As one of the world’s most attractive free-market economies for foreign direct investment, the former colonial outpost is hugely dependent upon international trade and finance. Hong Kong is a well-known launching pad for international firms seeking to enter or exit the Chinese mainland, and its fortunes are increasingly related to those of China, regardless of Hong Kong’s best efforts to remain a stand-alone, laissez-faire economy.

Hong Kong's economic achievements are impressive considering its small size. The continuous stream of capital inflow has made Hong Kong’s stock exchange the sixth-largest in the world.

One of the Hong Kong Monetary Authority’s primary objectives is to ensure the stability of the currency, and it has been vigilant in doing so. On several occasions, USDHKG has moved towards the lower limit of 7.75 before the Authority intervened, purchasing tens of billions in foreign currency in order to adjust the rate accordingly. Honk Kong's exchange fund has become one of the world’s largest official reserves, totaling near $303 billion (US).

Through tumultuous times, maintaining the peg has not been easy. The HKMA has been forced to match ultra-low US interest rates, even at the expense of a high inflation rate, and Hong Kong property prices have increased dramatically as a result.

Many analysts are currently speculating as to when the HKD will be re-pegged, either at a lower USD rate, or perhaps even to the Chinese yuan (CNY). Economists believe that this would probably not occur within the next five years, especially while the USD remains the unrivalled international reserve currency—a role which accords the HKD added stability—and while the yuan is not fully convertible.

The HKMA rationalizes that if the current currency mechanism works, why change it? If re-pegging of the HKD becomes a real possibility, however, we could see it fall to parity with the yuan. However, the likelihood of this happening remains low, and in the meantime, USDHKD is unlikely to trade below 7.75.

On the other hand, there is a good possibility that the HKD could devalue. We have seen the USDHKD rise near the 7.80 upper limit several times in the last couple years (the last time being November 2011). This occurred during times of capital outflow, for example, during the Asian financial crisis.

Weaker demand for HKD might also occur as Hong Kong residents purchase Chinese yuan deposits or increase lending to enterprises in China. (Banks in Hong Kong lend money in HKD but must exchange the funds, as Chinese borrowers require CNY.)

It is also possible that a speculator attack might occur, one that causes the HKD to be dumped on the market on a massive scale. This is exactly what happened in 1997 and 1998 when hedge funds and money managers sold pegged local currencies in favor of the US dollar in order to force their revaluation.

The HKD might also temporarily lose value if the HKMA lags behind the Federal Reserve in terms of matching interest rates. If the Fed were to increase interest rates and the HKMA was slow to raise rates in response (in order to maintain the pegged rate), the capital outflow would devalue the HKD.

The USDHKD is unique in that the economic drivers that affect most currency pairs, such as trade balances, inflation, and GDP have a muted effect because USDHKD can only trade within a narrow, essentially pre-defined range. This range keeps most small speculators away, and as a result, profiting from the HKD requires patience.

USDHKD is currently close to the lower band of 7.75, so it doesn’t have much room to fall, but as mentioned, there are a number of reasons why it can rise. As a result, the risk/reward ratio is very persuasive, as long as you believe that the currency won't be re-pegged in the near future.

While emerging market and Asian currencies have fallen sharply against USD, HKD has maintained its resilience, primarily because Hong Kong’s economy has remained buoyant over the last five years, producing an average GDP growth rate of 2.56%. However, should the real possibility of a Chinese slowdown affect Hong Kong’s economy, we may see a capital flight from the region and a devaluation of all local currencies, including HKD.

On the other hand, if the revaluation pressure continues to build and officials assess that the current USD peg is limiting economic growth in Hong Kong, we may see signs that foreshadow the delinking of the currencies.

In my opinion, the Hong Kong dollar hovers as a buy opportunity around 7.735.