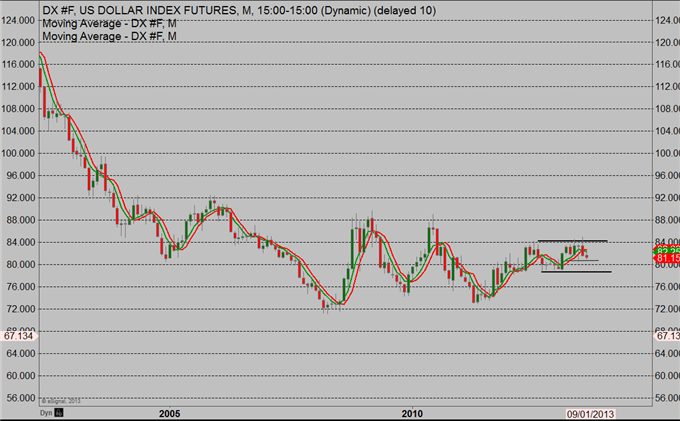 Dollar Traders, Think Inside the Box

Despite short-term volatility, the US dollar index has been in a tight range for all of 2013, and with fundamentals also supportive on the long side, a potential long-term breakout opportunity may now exist.

Investors and traders need to determine the degree of importance of the information they are basing decisions on, or more simply, decide whether they want to be an investor or trader and make decsions on the appropriate time-frame chart.

An investor would favor the monthly and weekly time frames, while a trade might favor the daily or intraday time frames. At Trading University, we believe in spending the majority of our efforts focusing on trading in the direction of the longer-term patterns. While we teach short-term daytrading tactics, we don’t always encourage their use. At times, trading requires sitting tight and just observing, and because of the decreased volume, summer is typically one of those times.

The easiest way to detemrine if a market is slowing down is by identifying the times when ranges, or boxes, form and market’s meander back and forth within tight ranges. Experienced traders also call this occurrence the “spin cycle” in reference to the cycle on a washing machine when it stops and starts repeateadly in order to wring out the water.

These formations are often seen at major inflection points when a bear market shifts to a bull market, or vice versa, and we feel we are very close to that point right now in the US dollar (USD).

As shown below, since putting in resistance last summer at approximately 84.00, the US dollar index has essentially been trading sideways this past year. The two-and-a-half-year high, which was briefly eclipsed in July of this year, and the one-year low posted in September 2012 mark out a box that contained the greenback for all of 2013.

We still see the underlying fundamentals as being bullish for the US relative to major trading partners, and we agree with Nomura and Deutsche Bank’s long-term bullish analysis. As we have been saying for years, the US was the first major economy to go the quantitative easing (QE) route, and therefore, it will be the first to exit that strategy, which will naturally lead to an uptick in US rates.

The trillion-dollar question, of course, is how to profit from that if we’re right?

We favor long US dollar positions and would consider dollar-cost averaging into long positions. This strategy would entail buying a fixed dollar amount of a security every two weeks or every month with the idea of accumulating it as an investment.

From a long-term perspective, we view a further drop in the dollar as a potentially historic opportunity. If we liked it at 84 for a potential breakout, we would love it near the 79 handle. If you opt in to that type of thinking, however, you need be able to make decisions on a weekly or monthly basis.