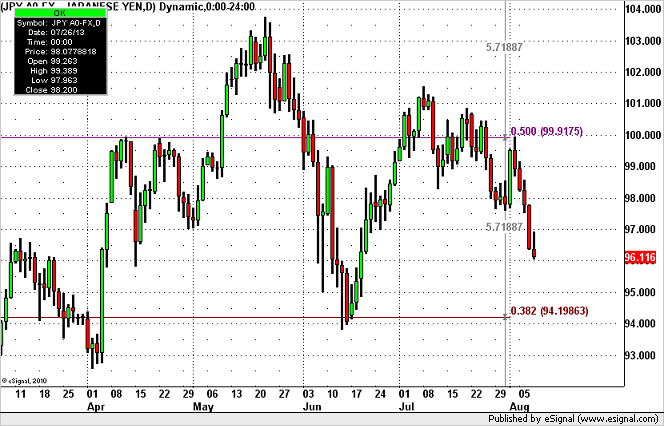 Lost in the excitement over Aussie volatility is the ongoing selloff in USDJPY, which continues to run without much resistance, effectively calling into question one of this year’s “can’t-miss” forex trades.

The bulk of the action in the forex market today is once again concentrated in the Australian dollar (AUD), which dropped overnight on the back of weaker employment numbers only to recover on Chinese trade balance data that showed imports rising 10.9%.

Australia feeds China's thirst for iron ore and relies on its demand for growth. As such, the volume of iron ore imported by China in July was the largest this year, which is a very good sign for Australia's economic outlook.

Traders should expect the volatility in the AUDUSD and other Aussie-related pairs to continue for the next 24 hours, with Chinese inflation and industrial production numbers scheduled for release along with the Reserve Bank of Australia (RBA) statement on monetary policy.

However, lost in the excitement of the big moves in AUD is the continued selloff in USDJPY. The currency pair has now fallen for the fifth consecutive trading day to reach its lowest level since June 16. Although US weekly jobless claims ticked up slightly from 328K to 333K, the absolute amount of claims is still low and consistent with an overall recovery in the labor market.

While continuing claims also rose to 3.018 million from 2.951 million, the four-week moving average dropped to its lowest level since November 2007. The data provided no help to USDJPY, though, and the pair quickly shrugged off a knee-jerk rally.

Last night, the Bank of Japan (BoJ) left interest rates unchanged. The Bank also nudged up its expectations for inflation, saying that, "it appears to be rising as a whole," but did not officially alter the economic assessment.

Comments from BoJ Governor Haruhiko Kuroda were more upbeat, as he indicated that the downside risks as a whole have moderated to some extent in Europe and China. Kuroda also noted that income and spending conditions have improved.

Japanese purchases of foreign bonds have reached the highest level since August 2010, which should have helped push the pair higher. Unfortunately, the continued slide in the Nikkei and lack of upward momentum in US yields has prevented USDJPY from rallying.

From a technical perspective, there is no major support for USDJPY until the 95 level, and even then, beyond the psychological significance of this level, there is not much standing in the way of a continued decline to the June lows at 94.

From a fundamental perspective, the reasons for buying USDJPY, including Fed tapering and BoJ easing, remain intact, but at this stage, we would prefer to wait for the currency pair to stabilize and start to turn higher before buying.