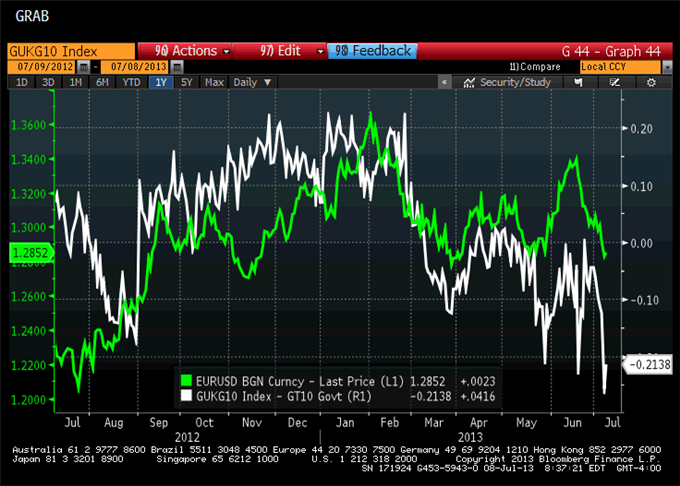 The Critical EUR/USD Factor to Watch

Technical factors and a very reliable correlation with US and global bond yields suggest that the EURUSD can trade much lower once nearby support levels are broken.

The recent rally in the US dollar (USD) has taken the greenback to fresh highs against many major currencies. The euro (EUR) and British pound (GBP) are now trading within a cent of their year-to-date lows, while the Australian dollar (AUD) is hovering above 90 cents.

The Japanese yen (JPY) still has room to fall before reaching the next major resistance at the four-year high above 103, but given last week's developments, particularly in Europe, we believe it should only be a matter of time before these resistance levels are broken.

Europe pledged to provide easy money for the foreseeable future, and the Bank of England (BoE) is being surprisingly aggressive. The recent volatility in short-term rates made central bankers in the region uneasy, while uneven growth justifies the need for continued stimulus.

With the European Central Bank (ECB) and BoE going out of their way to stress dovish monetary policy and the Bank of Japan (BoJ) considering increasing the frequency of asset purchases this week, the Federal Reserve is on a solitabry path to reduce stimulus. On this basis alone, we expect the dollar to continue to rise, especially given the newfound dovishness from the BoE and possibly the BoJ this week.

Traders should now be focused on yields, and as our colleague Boris Schlossberg pointed out this morning, the spread between ten-year US Treasuries and German bund yields hit a seven-year high last week.

The chart below compares the inverse of this spread (bund/Treasury) with the performance of the EURUSD and suggests that given the speed and magnitude of the decline in the spread, the EURUSD should be trading much lower.

While the spread between UK and US yields also dropped to its lowest level since 2006, the GBPUSD has kept track with the magnitude and speed of the selloff.

Taking a look at shorter-term charts, the April low of 1.2746 is near term support for the EURUSD, but if we look at the monthly chart, a series of lower peaks can be seen with a base near 1.2050.

Of course, there's a long way to go before that level is reached, and the currency pair will mostly pause at 1.25, but the technical structure points to further losses once the EURUSD drops below 1.2746. 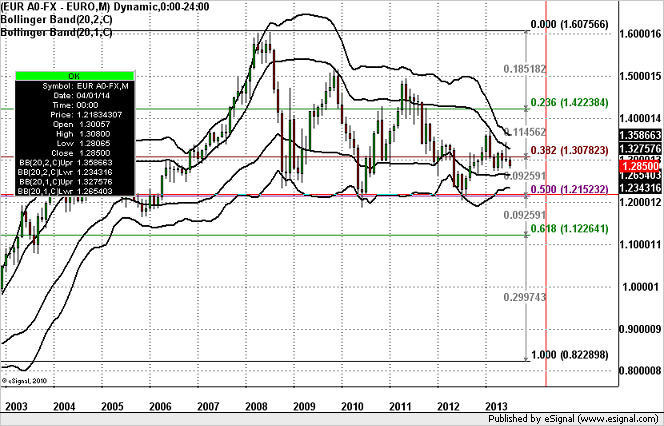 While USDJPY will be in play this week with the Bank of Japan rate decision on the economic calendar, the Federal Open Market Committee (FOMC) minutes on Wednesday and Eurozone data will keep the EURUSD in focus. If the minutes from the last FOMC meeting reveal significant consensus behind a move to taper in September, the EURUSD could break its current year-to-date lows and head towards 1.25.