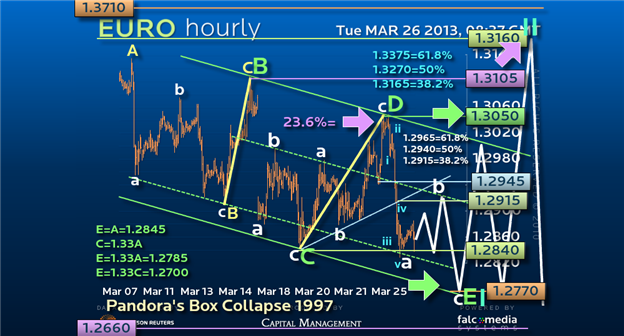 * EURUSD continues to follow the Pandora's Box Collapse analogy with 1997. * We therefore continue to maintain the same strategy of staying core short from 1.34 but hedging when there is a risk of sizeable (100+pip reactions).

The Euro confirmed our suspicion of a new low with the aggressive break down and should therefore soon reach another point of inflection in the new 'Pandora's Box' downtrend.

Since the 1.3710 high, it appears the first leg of this new downtrend is ending with a persistent declining wedge… However, following the three wave corrective recovery (the D wave the last correction in the wedge) to the 1.3040-50 equality target, 23.6% retracement and wedge resistance, the Euro has broken down already to a marginal new low already beyond the E=A target of 1.2845 in what appears to be a 5 wave down. Enough? Well it could be but one thing we have learned about the 2013 Euro is that it is persistent. And the wedge should complete with a final 3 wave decline begging a final new low.

Even though this next new will be the most dangerous yet, we will again hedge our structural short this time below 1.28 looking for a later rally through wedge resistance to signal 1.3165 the start of the wedge and 38.2% but with potential to correct as high as 1.3270.

Since we have to allow for an aggressive 1.2700, only a loss of 1.2660 signals the downward acceleration.