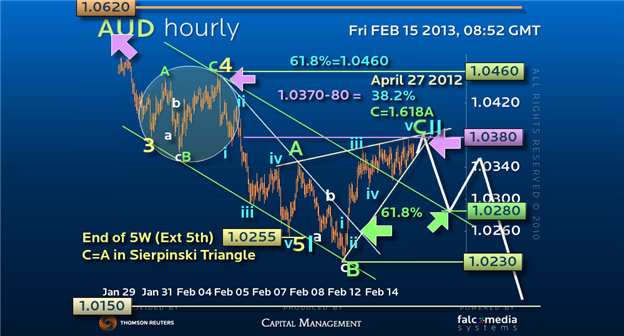 * Where different views coincide this raises the probability of a trade significantly.

* So although we have squared our long held AUDUSD shorts, a confluence suggests it is time to sell again but with some degree of monitoring and flexibility.

In our bid continually to find higher probability better risk/return trading set ups, one word features strongly: confluence. Where more than one levels particularly Fibonacci retracements coincides the probability of that level working increases. Where a 61.8% of a shorter move is same as the 38.2% of the major move its worth noting. The Same with Views…where a apparently diametrically opposing views bullish and bearish coincide the probability of that coincidence working increases significantly. So welcome to the Confluence trade.

We are selling the Aussie again.. Since our defiant stand against the extreme bullish sentiment at 1.06..the top of the daily triangle, we have stayed short and used a series of apparently similar (irregular) corrections to sell more... until 1.0255. The end of a possible 5W trend sequence (with an extended 5th wave) from 1.06 but also the end of a possible C=A down-leg within a triangle within that Sierpinski triangle. So we squared shorts expecting the 1.0235 region to hold for at least more consolidation and another corrective rally but to where…

However, one of the reasons we stayed short until 1.0255 was the striking similarity with previous price action from April 2012 which continues. This called for the marginal new low to 1.0235 before a stop seeking overlapping rally only to 1.0380 just beyond the 38.2% before Aussie breaks down at least to attack the 1.0150 low. And we here are ....at the end then of another possible irregular correction to the c=1.618a and strikingly similar to the previous correction. So we are selling expecting 1.0380 to 1.0400 to cap for both a possible correction to 1.0280 but with potential to accelerate…However where this confluence ends at 1.0280 unless there is evidence to the contrary we will reduce shorts as the probability shifts and as 1.0230 again survives or than 48 hours then the probability will shifts again in favor of a larger correction through 1.04 to 1.0460 and possibly 1.06 before breaking down.

Further videos or commentaries are available from ww.marketvisiontv.com or @EdMatts on Twitter.