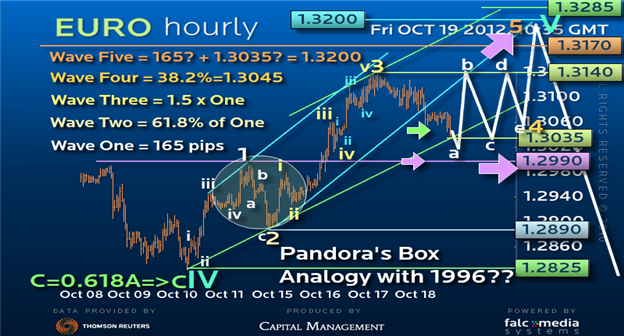 Guest Commentary: EURUSD is a Textbook Example of Elliott Wave and Fibonacci!

* It therefore encourages the completion soon of a five wave trend sequence and a Major Top!

* But First the Market must get Long!

Following the likely end of a correction to the C=0.618 of A at 1.2825...The first wave of 165 pips has set the foundation for what is proving to be an idealized five wave rally.

The second wave, a simple zigzag a 61.8% retracement of the first wave has yielded an impulsive third wave with breadth (with support from the Euro crosses) and also a likely extended fifth wave. So although the retracement to the 1.3035-45 corrective target 38.2% is enough in distance, we have to tolerate a complex correction (to alternate with the simple second wave and doubly retrace the extended minor 5th wave).

This complex correction probably a typical consolidation possibly a triangle below the 1.3170 high should eventually produce a fifth spike wave through 1.3170 high in a move ideally worth 165 pips from the last corrective low currently targeting 1.3200.

So we have bought short term with a stop just below the 12990 overlap point with some patience for consolidation looking for a rally with divergence and a lack of breadth in other markets…as the Euro breaks above 1.32 where not only will we cover but also sell structurally with 1.3290 stops for at least 1.2825 again but with possibly a collapse following the Pandora's Box analogy. But that is another text book.

Further videos or commentaries are available from http://www.marketvisiontv.com or @EdMatts on Twitter.

Wouldyou like to see more third-party contributors on DailyFX? For questions and comments, please send them to research@dailyfx.com