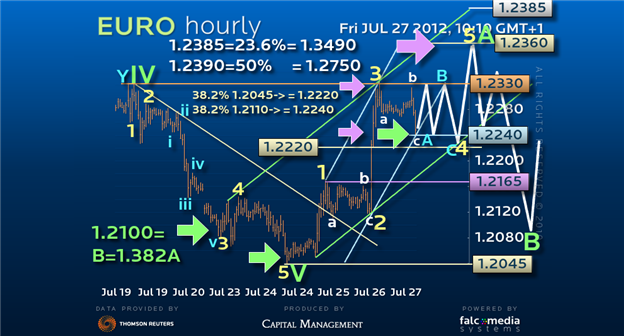 * Following a strong downtrend, it is typical for the market to sell into the subsequent rally with stops above the previous high, 1.2330 in this instance.

* Since a likely break of 1.2330 will end the uptrend, we will use these stops to exit our longs and sell into Monday!

The Euro rallied strongly from below the 1.2100 major fibo target area to encourage a return to consolidation and a larger corrective recovery. Since we expect an eventual resumption of the downtrend we reduced longs on this rally as it appeared a three wave potentially corrective rally into the previous corrective high.

However, the impulsive nature of this uptrend does beg a 5 wave rally. So the current to 1.2240 38.2% of the last rally and uptrend support is enough for a correction and therefore another attempt at 1.2330. Now even allowing for failure and 1.2220 later in a more complex corrective consolidation ( to answer the simple one lower down) we are rebuying this weakness for a later spike to1.2360 5=1 potentially 1.2385-90 the major confluence area.

Since this will take out bearish stop as the Euro ends the uptrend, we look to cover/sell this rally (with 1.2425 stops) for a return to consolidation and a loss of 1.2165 overlap (stop on long) to open up a retest of the lows.