The Canadian Dollar continues to be interesting as macro catalysts continue to shift each day. Multiple CAD crosses are approaching key areas, bringing the Loonie into focus. The commodity-driven Loonie has held up much better against the US Dollar in 2022 than it’s G7 peers, thanks to an oil surge earlier in the year. As the Bank of Canada aggressively raises rates to combat domestic inflation, CAD may continue to perform well against non-USD peers.

USDCAD has been in a strong uptrend over the last few weeks as the Greenback has made yet another push higher. Into month-end, USDCAD pulled back from the resistance zone around 1.3200. The previous test of the 1.3200 area in July resulted in a decline that ultimately bottomed well below 1.2750. It remains difficult to see such a pullback materializing this time, given the current macro landscape. Long USD remains an extremely popular trade while oil has also pulled back on recessionary fears.

On the 4H chart of USDCAD, we can see that the dip below 1.3100 following US nonfarm payrolls on Friday was immediately bought up. Friday’s dip also failed to take out the Wednesday low, keeping the recent uptrend intact by carving out a higher low. If prior resistance at 1.3100 now turns into support, price may look to make a sustained attack on the 1.3200 zone into the September FOMC meeting.

Given the Nord Stream headlines late Friday, flows from a weaker EURUSD next week could spillover to USDCAD and push the pair higher. US markets will be closed Monday for the Labor Day holiday, which could make Monday’s session interesting from a USD perspective. Monday will offer market participants the chance to see how APAC and European traders react to Friday’s sell off and any other developments that may materialize. USDCAD could be caught in the crossfire, so traders may want to remain on the lookout for any related headlines over the weekend. 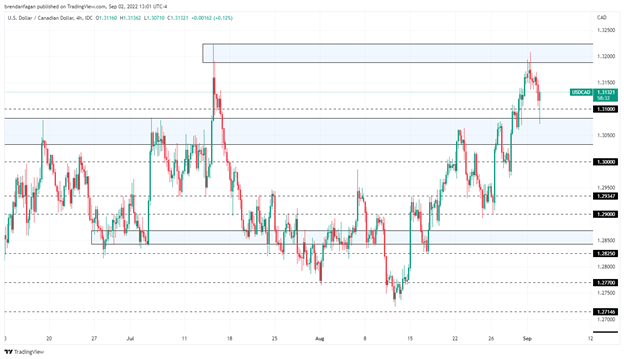 CADJPY remains interesting as the Japanese Yen continues to get pummeled on the theme of central bank policy divergence. While most of the attention has been on USDJPY, some of the other Yen crosses appear more interesting from a trading perspective. CADJPY broke lower in July out of a multi-month rising wedge formation, ultimately yielding a 450+ pip short opportunity. Price has since retraced as the Yen has come under fresh attack.

After holding 102.00 in July and early August, CADJPY has retraced back to resistance around 107, which coincides with a major Fib level from the April 1990 to April 1995 decline. It appears that price is knocking on the door here at 107, given that this is the third time the pair has traded back up to this zone in the last few months. Given the relentless nature of Yen selling lately, the uptrend may look to take the next step following this recent period of consolidation. Any break of this current zone could see a real squeeze as shorts could be caught offside quickly if they continue to bet on 107.00 holding firm. 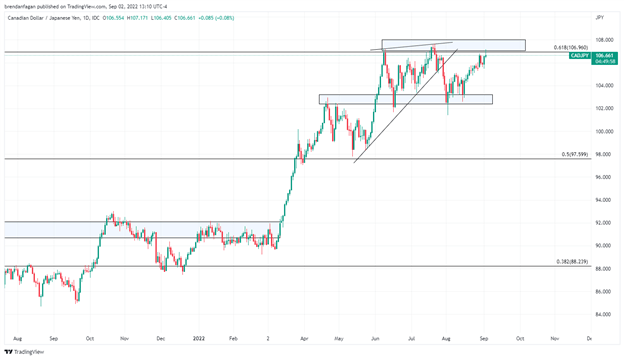 Looking at GBPCAD, we find ourselves observing two economies on opposite sides of the energy crisis. The UK continues to struggle with the high cost of energy while Canada, an energy exporter, has benefitted from elevated commodity prices. This is reflected in the chart of GBPCAD, which has fallen consistently since February. GBPCAD now sits in oversold territory on the daily timeframe for the first time since May as major support looms just below.

While an oversold RSI should never be used as an indicator to time reversals, it is helpful to point out that the current trend may be stretched. Price can always remain “oversold” and the trend may continue, as markets can always remain irrational longer than market participants can remain solvent.

GBPCAD notably continues sink toward psychological support at 150.00. This area at 150.00 proved to be the bottom of the 2007-2010 decline, and also held during a large slide in the early 1980’s. GBPCAD has declined for 9 consecutive months, with no signs of a potential reversal appearing.

Traders will want to watch the 150.00 area closely, as a break could usher in significant volatility. But with how far this trade has come already, it may be wise to ask if you want to be selling at these levels. All eyes shift to the UK as Monday will see the replacement announced for outgoing PM Boris Johnson, which could give the pair some life. That being said, oversold technicals continue to be overshadowed by numerous fundamental headwinds for Sterling. Taking this into account, I remain bearish GBPCAD. 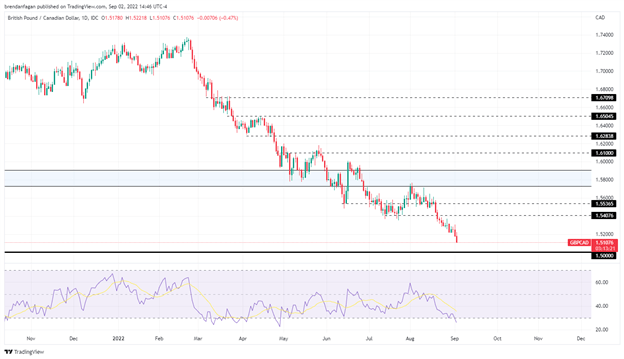