Oil prices are set to close the week down more than 4.8% (the larges weekly decline since November) despite setting a weekly range of more than 20% to fresh multi-year highs. As the global energy market attempts to re-route power around the Russian invasion of Ukraine, volatility in oil prices has exploded with WTI setting back-to-back weekly ranges not seen since 2008. While the broader outlook remains constructive, the initial price shock may have exhausted here near-term and the focus is on identifying low in the weeks ahead. These are the updated targets and invalidation levels that matter on the oil price weekly chart. Review my latest Strategy Webinar for an in-depth breakdown of this crude oil price technical setup and more. 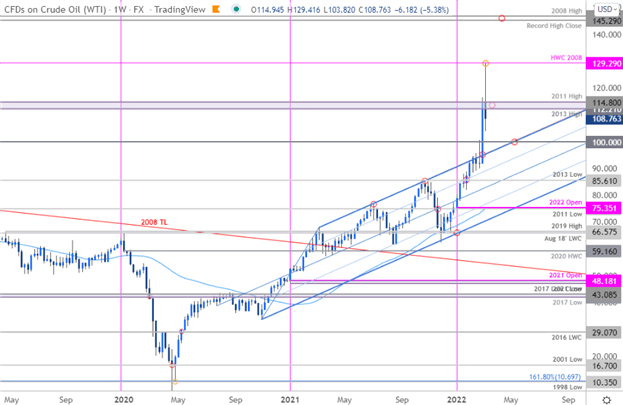 Notes: In my last Crude Oil Technical Forecast we noted that the WTI breakout was, “now testing the first of two key zones of technical resistance at the 2008 high-week close (129.29).” Prices briefly registered an intraday high 129.41 this week before reversing with WTI now set to close back below confluent resistance at the 2013 / 2011 swing highs at 112.21-114.80. Near-term exhaustion?

We want to again point to the August 1990 price parallel (when Iraq invaded Kuwait) as the last instance price saw weekly momentum surge to this level. A deeper study in volatility also highlights a extreme in the objective weekly range- the last time we saw a single week ATR reach this level was back in September of 2008. The more price parallels you look at, the deeper the conviction for expectations a period continued extreme volatile as price discovery works its way through.

Initial weekly support now rests at 100-proper with a break back below former slope resistance / turned support needed to suggest a more significant high is in place. Ultimately a weekly close above 114.80 is needed to mark resumption of the broader uptrend with such a scenario exposing the record high-close / high at 145.29-146.73 – look for a reaction into this zone IF reached.

Bottom line: The oil price breakout has exhausted into the first lateral level of resistance and a close below 114.80 highlights the risk for further weakness. From at trading standpoint, we’re on the lookout for a possible exhaustion low ahead of former slope resistance (currently near ~96) IF price is indeed heading higher with a breach / close above 129.29 needed to fuel the next leg higher in price. 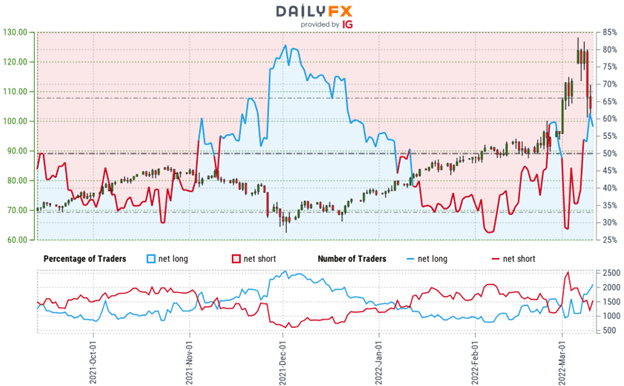