The British Pound made headway against the US Dollar last week, but a surge in the US Dollar on Friday trimmed gains, ending around 1% higher. Before the late-week pullback, GBP/USD hit the highest level since mid-January before prices broke down from a Head and Shoulders pattern, falling to the 100-day Simple Moving Average.

A break lower could push prices down toward the yearly low at 1.3356. Alternatively, further strength would target the 161.8% Fibonacci extension, a level that served as resistance last week, before aiming at the high-profile 200-day SMA. The trend may favor a move lower this week, considering prices put in the third higher low since early January.

British Pound was also a gainer against the Canadian Dollar, with GBP/CAD rising nearly a full percentage point. However, the move higher fell just short of taking out the 2021 high, set in early January at 1.7313, but it still marks the highest weekly candlestick close of the year. A bearish divergence was formed with the RSI oscillator making a higher high while prices failed to do so.

That coincides with a weakening MACD oscillator, represented by the falling histogram, suggesting momentum has stalled out. A bullish cross between the 50- and 100-day SMAs offer a conflicting technical signal. That said, the outlook remains more neutral until prices take out the nearby 2022 high, which would break the bearish divergence. 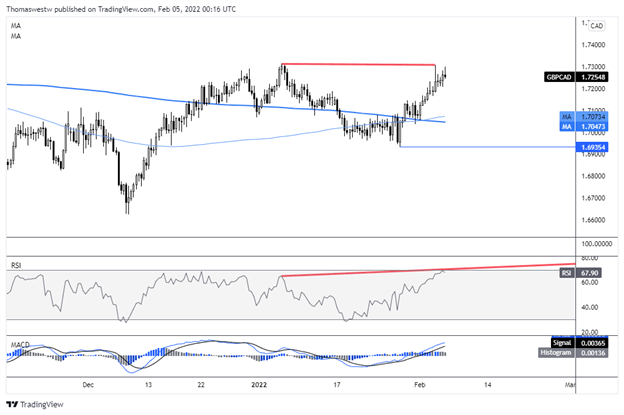 The Euro impressively defeated the Pound, with EUR/GBP rising 1.69% to the highest level since December 23. That move pierced the 50- and 100-day SMAs on that ascent. If prices continue higher this week, the 200-day SMA may offer some resistance. Alternatively, if prices reverse lower, a major zone of resistance from 2016 may underpin prices. There is also a hidden bearish divergence showing between prices and the RSI oscillator (indicated by the red lines on the chart). That is when prices set a lower high as an oscillator - in this case RSI - sets a higher high. The latter can at times hint at downtrend resumption. 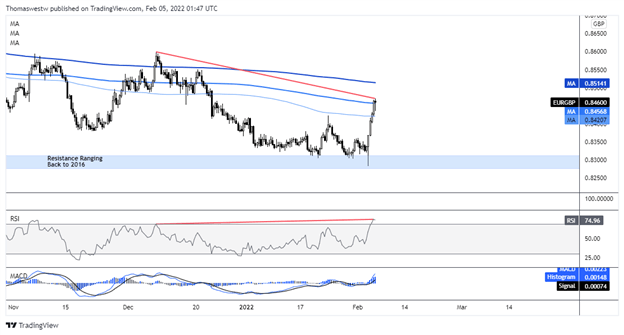