The British Pound broke a two-week winning streak versus the US Dollar last week after a modest price drop. A Death Cross formation in early September failed to see bears take control despite the high-profile bearish signal generated by such a technical formation. Prices are currently trading back above the 50- and 200-day Simple Moving Averages (SMA).

The 38.2% Fibonacci retracement from the July high/low may provide support if downward price action continues this week. A drop below that will bring the 200-Day and 50-day SMAs into focus. The broader view sees a Symmetrical Triangle pattern. The consolidation pattern started back in late July, with prices selling off into mid-August when the triangle’s support level started. A break above or below the pattern may result in an extended move. However, the overall bias remains neutral until that occurs. 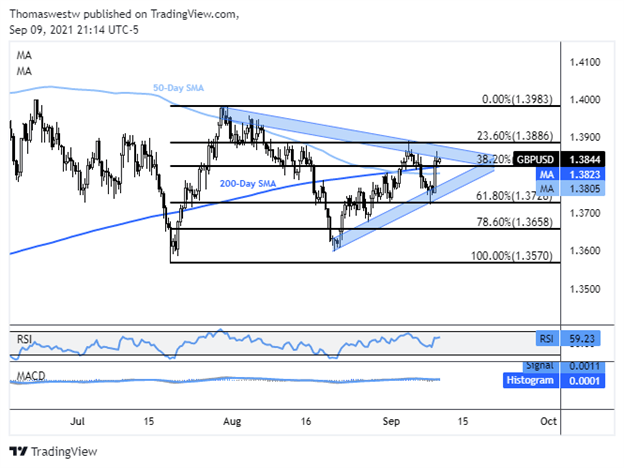 The British Pound gained versus the Australian Dollar last week, with GBP/AUD seeing a near 1% rise on the week. The bullish action follows back-to-back losses for the currency pair. That decline saw prices fall from the highest level since May 2020. A Bullish Engulfing candlestick pattern on the 8-hour timeframe marked the reversal higher early last week.

GBP/AUD’s bullish action last week saw prices slice above a descending trendline from the August high. Bulls continued to drive prices higher through the week, with a push above the 50-day SMA. The 38.2% Fibonacci appears to be providing a layer of resistance, but momentum looks primed to carry the pair higher. The MACD line is tracking firmly higher and may cross above the oscillator’s center line, a bullish sign. 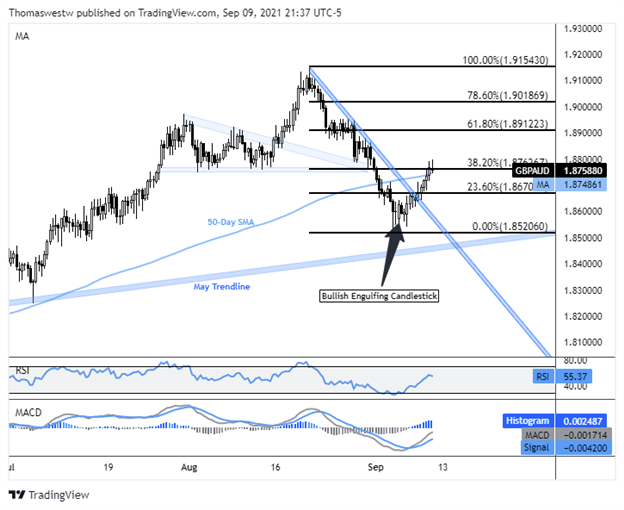 The British Pound has tracked higher versus the Swiss Franc since the currency pair hit a six-month low back in the middle of August. GBP/CHF is nearly 2% higher from that low. Prices have formed an ascending channel, with the August high of 1.2793 now within one percentage point. The uptrend saw a Bullish Engulfing candlestick pattern kick off the move higher.

The 78.6% Fibonacci retracement from the August high/low is the next obstacle for prices to surmount before moving higher. The 61.8% Fib level underpinned prices after shifting lower from the rising channel’s upper bound. Overall, the path of least resistance remains skewed higher as long as prices remain in the rising channel. 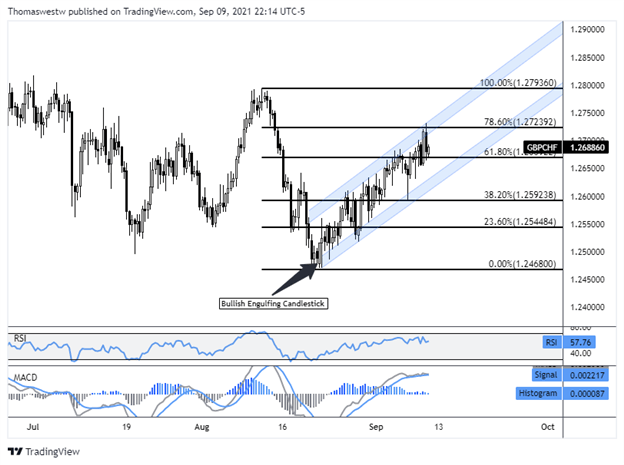