The Australian Dollar continued to track higher last week, extending its winning streak from the prior week. AUD/USD has now put in a nearly 5% advance from its August swing low when the pair hit a fresh 2021 trough. The 50-day Simple Moving Average was quickly dispatched during the push higher, marking a victory for Aussie Dollar bulls.

AUD/USD made a full retracement of its move following a breakdown from a Rising Wedge pattern and is now halfway to its 161.8% Fibonacci retracement. Upward price action may continue this week after the pickup in bullish sentiment. However, a pullback to the 50-day SMA might signal some profit-taking from investors while keeping the bullish narrative intact.

The Relative Strength Index (RSI) is in overbought territory, although the MACD oscillator is tracking firmly higher. If prices do continue rising, the falling 100-day SMA will offer a test for bulls before hitting the 161.8% Fib extension. A former area of resistance near the psychologically imposing 0.7500 level could also cap gains this week. 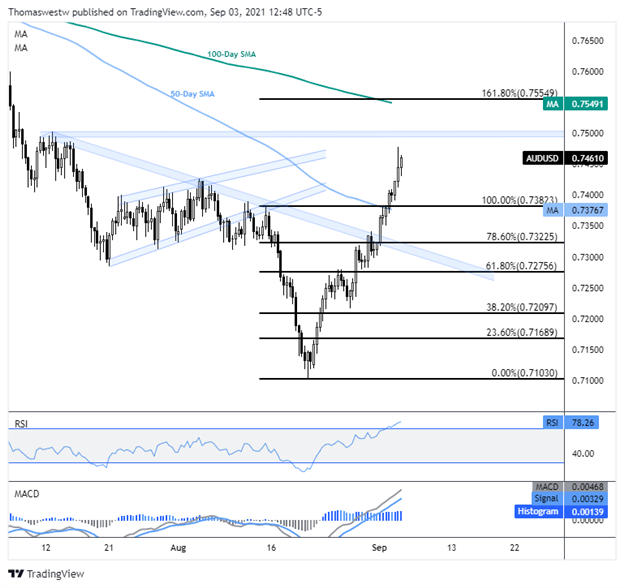 The Australian Dollar also advanced versus the Euro last week. EUR/AUD dropped for a second consecutive week, with prices over 3% lower from the August multi-month swing high. That high was preceded by a strong bull rally from earlier this year when the currency pair hit its lowest level since early 2018.

If the current weakness continues, EUR/AUD may hit an ascending trendline formed off its March swing low. Prices pierced under the rising 50-day SMA last week after a Bearish Engulfing candlestick marked the current retreat’s start. Prices are currently testing the 61.8% Fibonacci retracement from the July/August move. A break below that trendline would open the door for an attack on the 200-day Simple Moving Average. 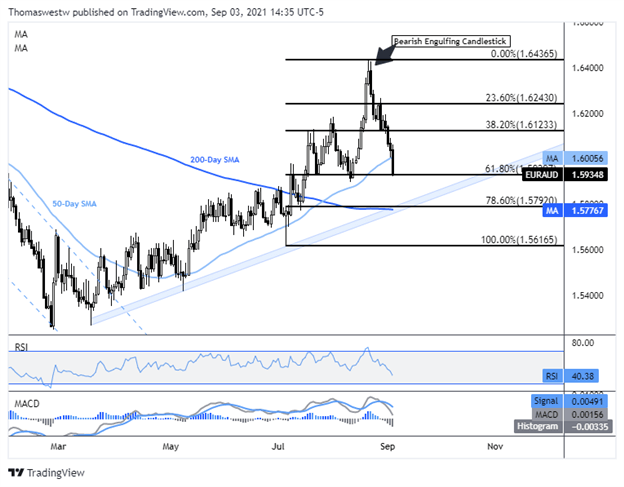 The Australian Dollar completed a second consecutive week outperforming the British Pound, with GBP/AUD down over 1% last week. The currency pair is nearly 3% lower from its 2021 high (1.9154) back in August. The 50-day SMA was broken on the downside action, which saw the move gain steam into the end of the week.

However, the 8-hour chart saw a Doji candlestick form. This sometimes represents the start of a trend reversal, although the signal would be more confident if it appeared on the daily timeframe and saw confirmation. Still, prices are at a prior area of resistance turned support, with the 61.8% Fibonacci retracement from the July/August move defining the zone. A drop lower would bring a rising trendline into focus. Oversold RSI may suggest some short-term consolidation before a directional continuation or reversal. 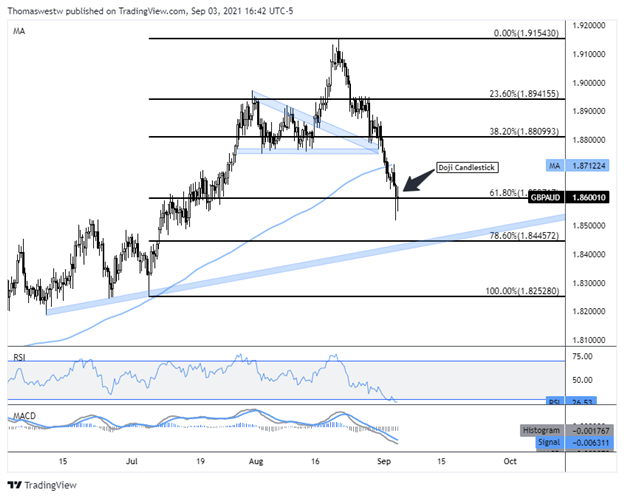