We are still passing through the Summer Doldrums, but there has been a tentative shift in tempo for certain assets. Crude oil (a frequent correlation to the Canadian Dollar) for example has broken range support at 65 and continued lower for seven consecutive trading sessions while USDCAD exploded higher in another push through its 1.2600 where the 200-day moving average approximately stood. This wasn’t the only currency pair to post such an impressive run. AUDUSD and NZDUSD produced similar results – just to the downside. So, is the market moving out of its quiet period and transitioning to meaningful trends? It is difficult to fight the prevailing trend, but my litmus test will be how broad the effort proves. If USDCAD attempts to go it alone, I believe the probability of full reversal is much high. On the other hand, if the most liquid FX pairs, indices, commodities and other financial powerhouses gain clear traction; this move may prove just an early and eager mover. 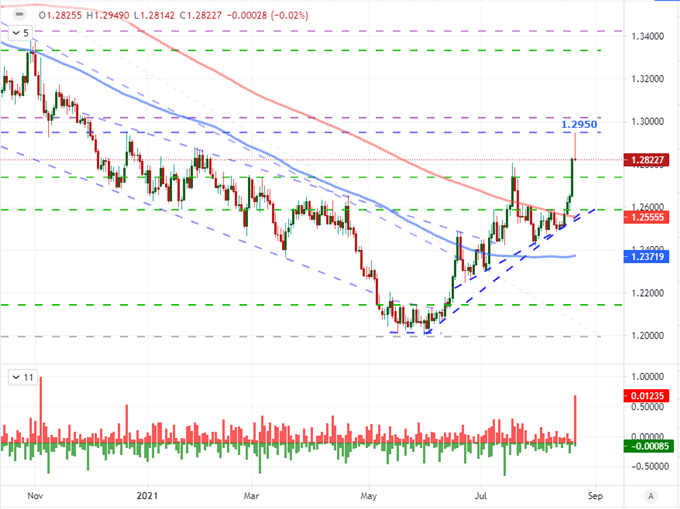 For immediate technical levels to start off next week, first line support and resistance are fairly wide – that is a byproduct of the incredible volatility of late. While USDCAD managed to advance 2.5 percent – the second biggest weekly rally in 17 months – the exchange rate cut 1 percentage point of that move with Friday’s reversal. In fact, the turn and retreat through the final trading session this past week resulted in the largest ‘upper wick’ on a daily basis since November 4th. Normally that is a strong technical signal to suggest a fast return. Further technical evaluation of the 1.2950 ceiling shows there is some serious weight in the area. That same pivot was support from late 2018 up until December 2020. There is also a 38.2% Fib retracement to be found on the March 2020 to June 2021 steady bear trend just a little higher at 1.3000. Overall though, the levels don’t impress me as much as the tempo.

Chart of the USDCAD (Weekly) 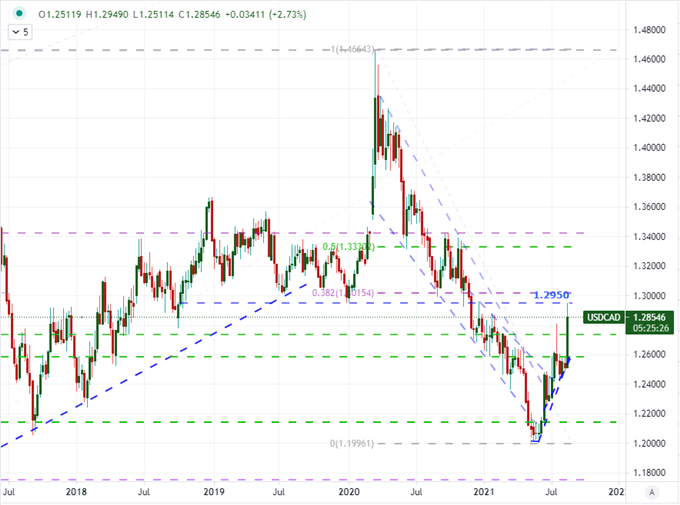 Looking for the motivation of the USDCAD’s move, it is tempting to suggest it was principally a US Dollar move. Distinguishing the source of the drive is important as the Greenback’s attention to next week’s Jackson Hole Symposium can create problems for follow through. That said, the Canadian currency may have contributed as much or even more to USDCAD’s progress this past week as its US counterpart. Below is a chart of an equally-weighted CAD index derived from its most liquid crosses. Clearly, it wasn’t just USDCAD that was showing the Loonie being throttled. 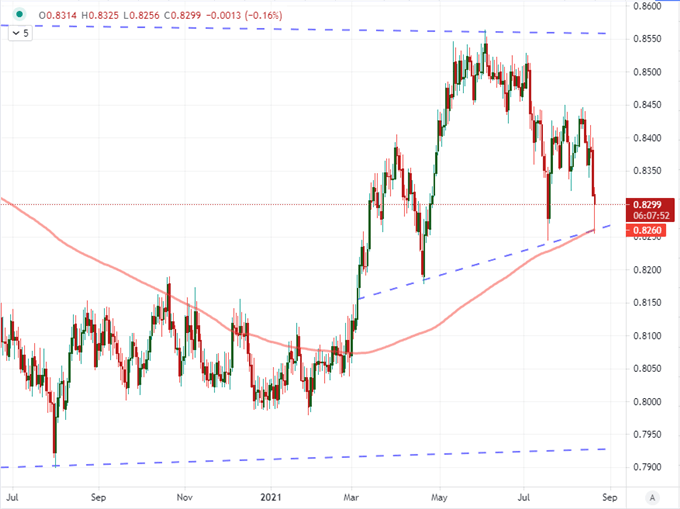 With the idea that the Canadian Dollar can generate its own heat, it is worth looking to some of the other technically-remarkable crosses. CADJPY is particularly interesting as it combines the pressure on the single currency with the sensitivity that most Yen crosses have to risk trends. There was a general sweep of risk aversion this past week that wouldn’t tip the likes of the Dow into full reversal, but it is did move many other assets further down their respective hills. CADJPY was on the verge of confirming a head-and-shoulders breakdown this past week, but Friday’s close has cast that view in deep shadow. That said there is still a progressive six month reversal pattern and we will start the week just on the action side of the 200-day moving average with spot having closed below it for the first time in 205 trading days this past Thursday. 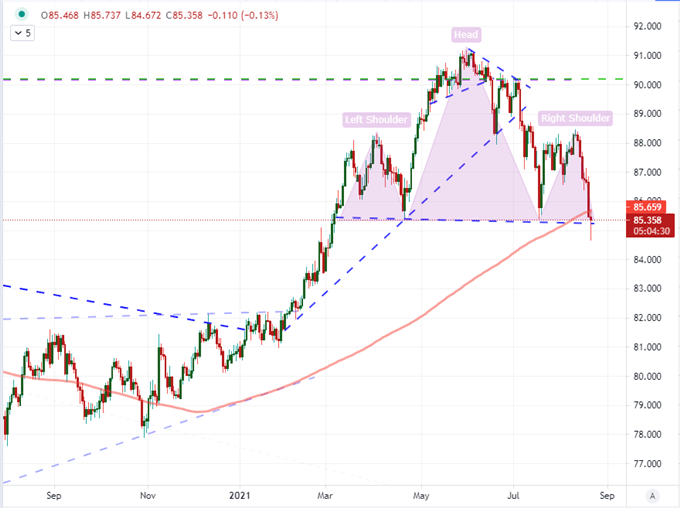 For a pair with a systemically different view than the USDCAD and CADJPY trends, NZDCAD is playing out competing volatility and bearish perspective that both the Canadian and New Zealand Dollars seem to share. While that may act against a clear bead for this cross, volatility is likely to remain very elevated. That could be interesting to range traders who are looking for faster markets but leaning against the probabilities of systemic trends when we are still passing through the Summer Doldrums. There is an inverse H&S pattern to be found on NZDCAD, but the range bounds from 0.8850 to 0.8600 are likely to be frequented technicals. 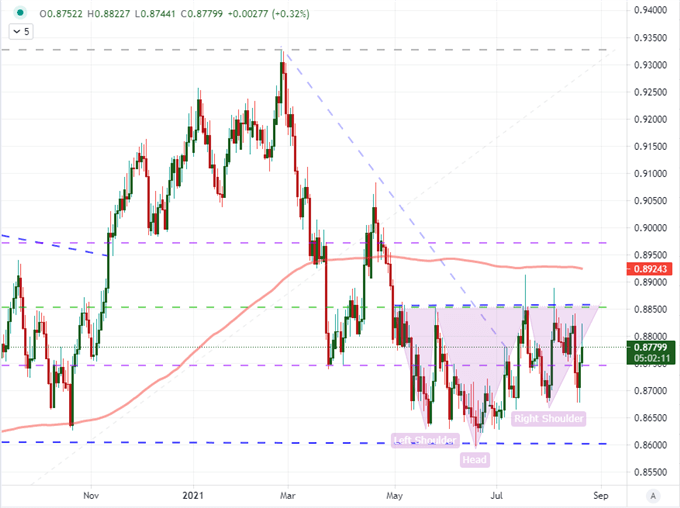 Speaking of the fade against questionable trend dynamics, retail FX traders at IG have gone to the unusual extreme of actually slipping into a net short position on the USDCAD pair through the end of this past week. The short interest overtook the July peak when the market would last retreat on the failed run after the 200-day moving average break. Overall open interest is materially lower though with a general preference this past year for long side exposure on the Loonie – a by-product of such a progressive bear trend from March of last year. 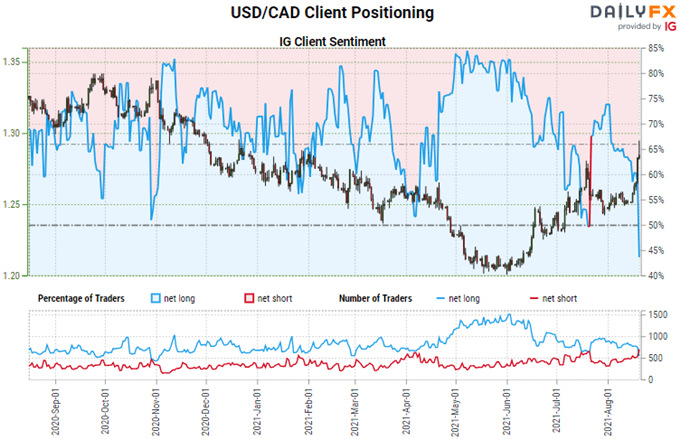 With a higher inherent time frame for its constituents’ perspective, the net speculative futures positioning figure from the CFTC’s Commitment of Traders’ (COT) report finds the view on USDCAD fairly close to balance. The accelerated slide in May drew out the net short interest, but the recovery specifically from July has quickly closed out the contrarian signal for reversal. Given that this data is delayed (Friday’s report only includes positioning data up through the previous Tuesday), it will be important to see how positioning changes from this week to the next. 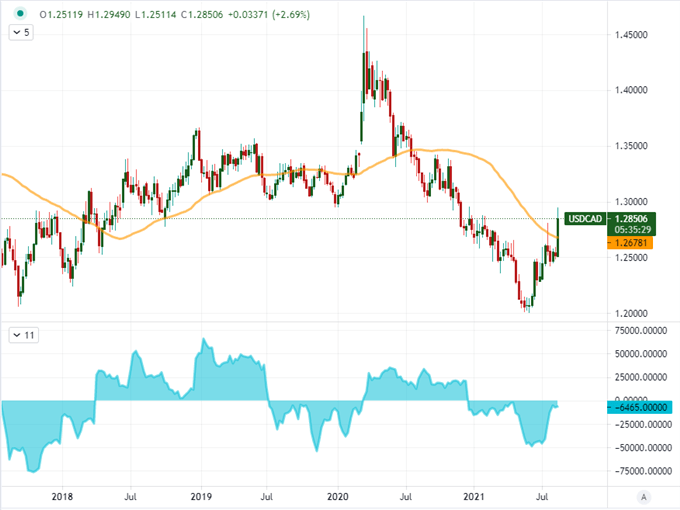 Chart Created on Tradingview Platform with Data from CFTC