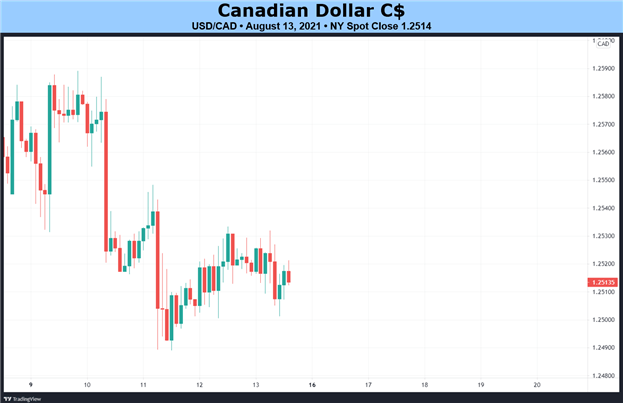 In what was one of the lowest volume weeks of the year for global financial markets, the Canadian Dollar produced a mixed but mostly positive mix of results. Five CAD-crosses produced Loonie strength (USD/CAD, EUR/CAD, GBP/CAD, AUD/CAD, and CAD/CHF) while two saw weakness (CAD/JPY and NZD/CAD). None of the CAD-crosses moved in excess of +/-0.5%, a sign of how constrained price action has been. Now that positioning in the futures market has been significantly reduced from its yearly highs, however, there is more room for significant price swings; a catalyst is needed, however. 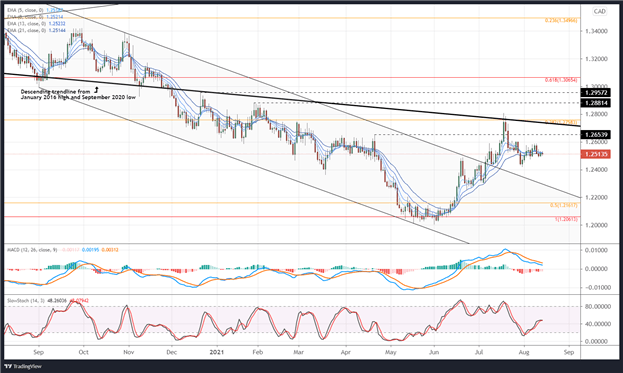 After fading from the descending trendline from the January 2016 high and September 2020 low, USD/CAD rates have been moving sideways with seemingly no semblance of momentum. It’s too early to say that the downtrend will resume, as the pair has yet to return to the descending channel in place since last September.

Momentum is, as suggested, neutral. USD/CAD rates are intertwined among their daily 5-, 8-, 13-, and 21-EMA envelope, which is neither bearish nor bullish sequential order. Daily MACD’s decline above its signal line continues, while daily Slow Stochastics is flat right above its median line. Another run up to the yearly highs near 1.2800 can’t be dismissed in the short-term (particularly if crude oil prices slide further, which seems possible near-term as well). 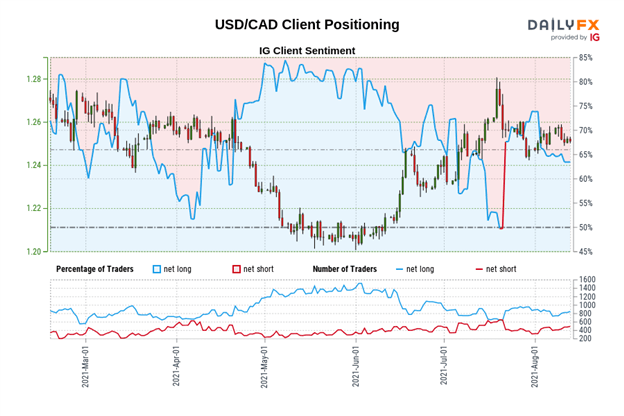 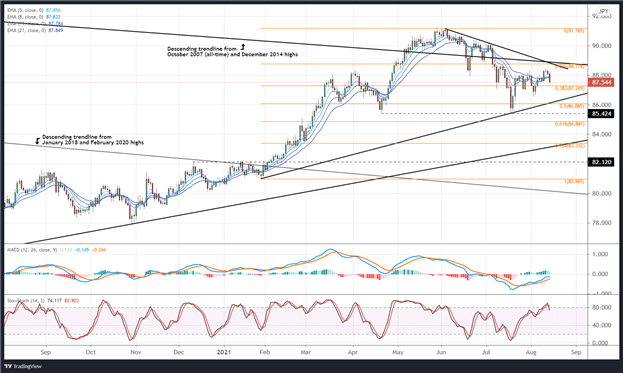 Two weeks ago it was noted that “failing to breach the April swing low is an important development, concurrent with a rebound above the 50% Fibonacci retracement of the late-January low/May high range at 86.09. It’s too soon to say that the turn has arrived given the relationship among CAD/JPY rates and its slew of indicators, but we have early evidence that ‘the low’ may have been found.”

CAD/JPY rates have been trading sideways ever since then, and it’s possible that the pair is funneling into a symmetrical triangle. Nevertheless, persisting below the descending trendline from the October 2007 (all-time high) and December 2014 highs suggests traders should keep an open mindset for more downside – at least for now. 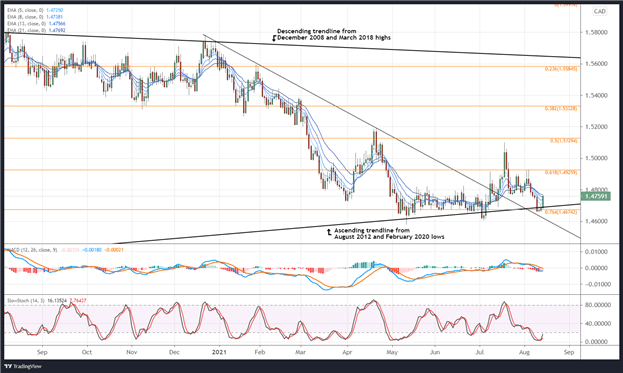 EUR/CAD rates are trading in a familiar area, having rebounded at ascending trendline support from the August 2012 and February 2020 lows as well as the 76.4% Fibonacci retracement of the 2020 high/low range at 1.4674. The pair has continues to consolidate into a multidecade symmetrical triangle dating back to the December 2008 and March 2020 highs, which in reality can be drawn even further back to the implied EUR/CAD rate at the March 1995 high. We need to see either a drop below 1.4600 or gains through 1.4926 (61.8% Fibonacci retracement of 2020 high/low range) before the next directional bias can be ascertained. 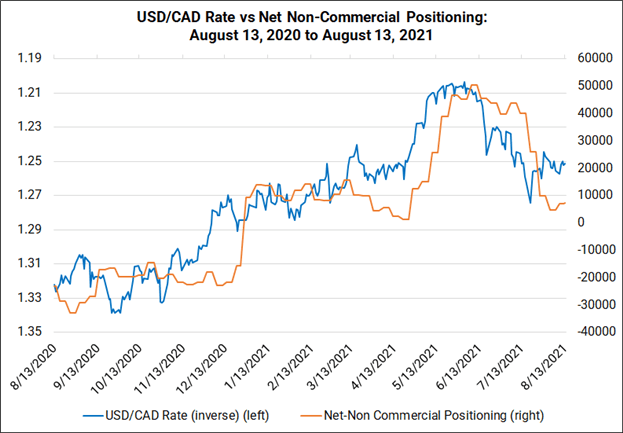