Gold put in a fourth consecutive weekly gain as the yellow metal continued to strengthen with the end of the month wrapping up. XAU/USD is on track to record a monthly gain north of 7% for May, its best performance since July 2020. While the bullish action may extend into June, several technical levels are under consideration.

The primary obstacle – and the most immediate – is the psychologically imposing 1900 level. Gold has grappled with this level over the past week, but a decisive break higher is necessary before writing it off. Should that move occur, however, the round figure level may turn to support the next time gold prices swing lower.

A potentially bullish crossover between the 50-day and 100-day Simple Moving Averages (SMA) appears to be on the cards for the coming week. The 50-day (blue line on the chart) has seen a sharp rise following the bullish price action this month, which has brought it to the underbelly of the now rising 100-day SMA. Should the signal generate by making the crossover, it could inject further bullish energy into the metal.

However, since April, XAU/USD has traded within a range that has formed a Rising Wedge pattern. The technical pattern is traditionally seen as a bearish one, with a break below the pattern’s support line possibly giving way to a prolonged selloff. That said, breaching to the underside of the wedge may put an end to the recent rally. Still, the 1900 level is key to overcome for further upside. This week may be a decisive one for gold’s direction. 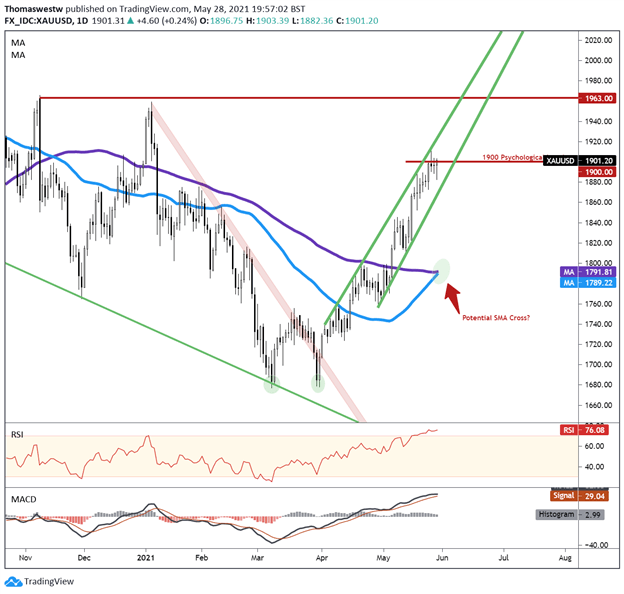