Gold prices rallied for a third consecutive week with XAU/USD up more than 1.5% after breaking to fresh multi-month highs. Gold has now rallied more than 12.6% off the March / yearly low and while the broader focus remains weighted to the topside, the rally may be maturing here as we head into the close of month. These are the updated targets and invalidation levels that matter on the gold weekly charts. Review my latest Weekly Strategy Webinar for an in-depth breakdown of this gold technical setup and more. 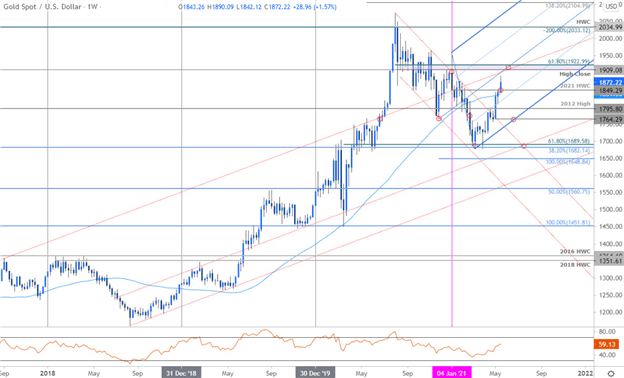 Notes: In last week’s Gold Weekly PriceOutlook we noted that XAU/USD was within striking distance of the 2021 high-week reversal-close at 1849 with a topside breach, “needed to mark resumption with such a scenario exposing subsequent objectives into the yearly open at 1898 and key resistance at the 2011 high-close / 61.8% Fibonacci retracement at 1909/23.” The rally persisted into the weekly open with gold registered a high at 1890 before pulling back on Friday. Although the trade remains constructive, the immediate advance may be vulnerable in the days ahead.

Key topside resistance remains unchanged 1909/23- look for a larger reaction there IF reached with a breach / close above needed to keep the long-bias viable towards the objective yearly high at 1959. Initial weekly support rests at 1849 backed by the 52-week moving average at ~1840 and the 2012 high at 1795- both areas of interest for possible downside exhaustion IF reached. Broader bullish invalidation now raise d to the monthly open / low at 1764.

Bottom line: The gold rally has covered 75% of the yearly range in just seven weeks and while the broader focus remains higher, near-term momentum may be waning on this advance. From a trading standpoint, the trade remains constructive while above 1840 – look to reduce long-exposure / raise protective stops on a test of confluent technical resistance at 1909/23. Losses should be limited to the 25% parallel IF price is indeed heading higher with a breach / close above resistance needed to fuel the next leg higher in XAU/USD. Review my latest Gold Price Outlook for a closer look at the near-term XAU/USD technical trade levels. 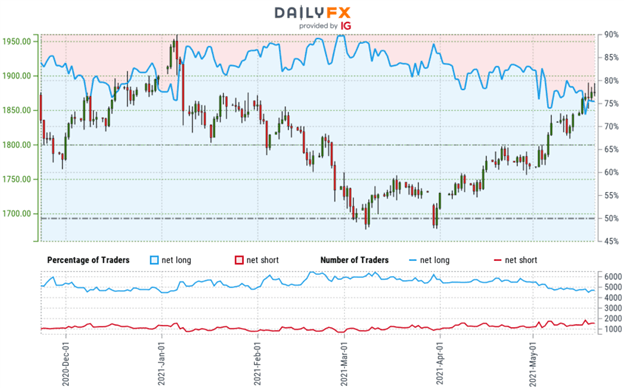